The facts are very much in dispute.

But when has that ever stopped a “News Organization” like CNN?

“Pulling U.S. forces from Iraq could trigger catastrophe, CNN analysts and other observers warn, affecting not just Iraq but its neighbors in the Middle East, with far-reaching global implications.”

“Experts”? Did you say “Experts”? Who are they, praytell? And what of those “other observers”?

As usual we don’t get an answer.

“President Bush vetoed a war spending bill Tuesday precisely because the Democrat-led Congress required the first U.S. combat troops to be withdrawn by October 1 with a goal of a complete pullout six months later.
Bush said such a deadline would be irresponsible and both sides are now working on new proposals — which may have no pullout dates.
A rapid withdrawal of all U.S. troops would hurt America’s image and hand al Qaeda and other terror groups a propaganda victory that the United States is only a “paper tiger,” CNN terrorism analyst Peter Bergen said. “

Once wonders how old Mr. Bergen might be. Surely he knows that “Paper Tiger” is a term from the Vietnam era.

Or maybe he doesn’t. Maybe he’s just another carefully spoon-fed sock puppet. (Note: CNN supplies none of Mr. Bergen’s bona fides — if they in fact exist at all.)

“It would also play into their strategy, which is to create a mini-state somewhere in the Middle East where they can reorganize along the lines of what they did in Afghanistan in the late ’90s,” Bergen told CNN.com.
It was in Afghanistan where Osama bin Laden and al Qaeda allied with the Taliban, and were allowed to run terror bases and plan the September 11, 2001 attacks against the United States.
Bergen says it is imperative that the United States not let that happen in Iraq.
“What we must prevent is central/western Iraq [from] becoming a Sunni militant state that threatens our interests directly as an international terror hub,” he said.

We all rememebr how headlines proclaiming Bin Ladin’s intentions to attack the United States impressed the Bush Adminstration. And that’s not to mention their post 9/11 campaign to find him — which was of course set aside in order to invade Iraq whose Weapons of Mass Destruction were posed to strike Great Britain.

That’s what “The Experts” said.

“Don Shepperd, a retired Air Force major-general and military analyst for CNN, agreed that Sunni Muslim fighters who support al Qaeda would seek an enclave inside a lawless Iraq likely riven along sectarian lines into Shiite, Sunni and Kurdish regions.
There would be “increasing attempts by terrorists to establish a training sanctuary in Iraq,” Shepperd said.
That’s one of the reasons why a fast withdrawal will not happen, whatever the politicians say, the analysts predict.”

So amusing to watch CNN talk to itself.

Yes dear, we know that Iraq is less a country than a loose assmblage of tribes — Shiite, Sunni and Kurdish — with the Shiites and the Sunnis at war with one another. That’s why we were ever so happy to have Saddam Hussein in semi-charge. At the height of his power he only could be said to “control” select areas of Iraq. But that was enough to keep the trains running more or less on time. Then he got greedy and invaded Kuwait — inspiring the ire of a wide group of oil-addicted Western powers, which beat them back in short order in the so-called Gulf War.

But that wasn’t enough for BushCo which — even before it took power — made plans to invade Iraq.

9/11 was turned into an excuse for doing so.

We’re there for the oil.

As for our “Game Plan” a genuine expert, Lucian K. Truscott IV (a superb journalist who has been in and out of that cursed country before during and after BushCo’s attack ) told me over four years ago that if the U.S. decided to leave it would take 20 years.

That’s because we have military installations there (the fabled “Green Zone” being only one) that neither BushCo nor the multi-nationals that put it in power, are about to give up.

“Everyone wants the troops home — the Iraqis, the U.S., the world — but no one wants a precipitous withdrawal that produces a civil war, a bloodbath, nor a wider war in an unstable Mideast,” Shepperd said, adding that the image of the United States was important too.

That image being of course shit.

And likely to remain shit in perpetuity.

“And we do not want a U.S that is perceived as having been badly defeated in the global war on terror or as an unreliable future ally or coalition partner.”

“Shepperd, a veteran fighter pilot of the Vietnam War, has served as a CNN analyst of the Iraq war since it began. Bergen was one of the first Western journalists to ever meet with bin Laden, and is considered a leading authority on al Qaeda.”

Why by CNN management of course.

“Shepperd said Iraq’s neighbors would be drawn into the all-out civil war likely if U.S. forces left too quickly. Iran could move in to further strengthen its influence in southern Iraq; Turkey likely would move against the Kurds in the north; and Saudi Arabia would be inclined to take action to protect Sunnis in western Iraq, he said.
The oil sector could also get hit hard, with Iran potentially mining the Persian Gulf and attempting to close the Straits of Hormuz, putting a stranglehold on oil flow, Shepperd says.
“Oil prices would skyrocket,” he said — perhaps soaring from current prices of about $60 a barrel to more than $100 a barrel, with consequent rises at the gas pump.”

Oil prices are already skyrocketing. That’s why Shepperd and his masters must do their best to scare us into thinking “THINGS COULD BE WORSE!” with charming pictures like this — 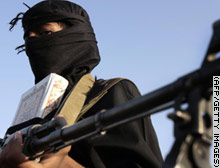 And that could bring further trouble, Shepperd added. “Saudi Arabia will not allow increasing Iranian dominance to endanger its regime and oil economy.”
On top of that, Iran could speed up its nuclear ambitions, causing a “daunting and depressing scenario” of a nuclear arms race in the Middle East with Saudi Arabia, Syria, Egypt and Turkey trying to get a nuclear bomb, Shepperd says

Take it away John Cale!

Observers such as Jon Alterman, director of the Middle East program at the Center for Strategic and International Studies, say a wider Mideast conflict could be avoided.
But Alterman also fears that an Iraq left without U.S. support could turn into a center for international terrorism and a proxy battlefield for regional powers like Iran, Syria and Saudi Arabia.
“All the surrounding countries would think their interests are much better maintained not by directly sending troops but by continuing to send money and weapons to the people fighting that war,” he said.
“In my judgment, it would take decades for such an insurgency to quiet down.”

As opposed to the warp speed of its “last throes,” correct?

“There are 120,000 Iraq soldiers now classified as trained by the U.S. military in Iraq, along with 135,000 police force members. But the head of the Iraqi ground forces, Gen. Ali Ghiran-Majeed, recently told CNN that some of his soldiers don’t even get paid, and that on any given day one quarter of the force is on vacation.”

Where does one go on vacation from Iraq?

“For U.S. troops on the ground, the idea of withdrawal is vexing.
“I think it would cause a huge vacuum that the enemies of Iraq — enemies of the government — would take advantage of,” said U.S. Brig. Gen. Dana Pittard, the commander of the Iraq Assistance Group.
Staff Sgt. Matthew St. Pierre is one U.S. soldier who’s come to the conclusion the United States cannot win the war, but he says he also fears the consequences of withdrawal.
“We are the buffer right now and when we pull out, the people who support us are going to feel the wrath, and the people who are against us … they’re going to ultimately win. And I think that’s unfortunate,” he said.
That is a prognosis that concerns many, though Shepperd sees a viable solution for Iraq, albeit one with a U.S. presence there for years to come.
“Done properly we should be in Iraq for years, not in a combat [role], but an embedded advisory role,” he said.

All of this has a decidedly familiar ring. At last weekend “Los Angeles Times Book Fair,” journalist Robert Scheer reminded us all of the dire warnings of what would happen were the U.S. to withdraw from Vietnam. Doom-laden scenarios of Chinese Communist Dominated Southeast Asia were cocktailed up by the “experts” of that day. And what happened? Rather than joinign forces the coutnries went to war.

Meanwhile back in Iraq “sectarian violence” continues, with Al Queda a bit player in a conflict that continues to bar us access to the “freedom” we seek.

The freedom to loot.

And here’s John Cale for the grand finale!

“Standing waiting for a man to show
Wide eyed one eye fixed on the door
This waiting’s killing me, it’s wearing me down
Day in day out, my feet are burning holes in the ground

Darkness warmer than a bedroom floor
Want someone to hold me close forever more
I’m a sleeping dog, but you can’t tell
When I’m on the prowl you’ld better run like hell
You know it makes sense, don’t even think about it
Life and death are just things you do when you’re bored
Say fear’s a man’s best friend
You add it up it brings you down