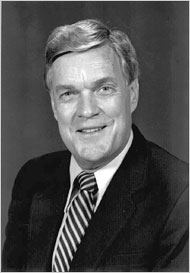 Break out the Cristal!

“Robert K. Skolrood, a lawyer who battled for fundamentalist Christians on issues that included nativity displays and gay rights and who often examined the intricacies of the United States Constitution, died on Feb. 20 in Venice, Fla. He was 79.
The cause was kidney cancer, his son Mark said.”

Really? I would have guessed the wig killed him.

“Mr. Skolrood was executive director of the National Legal Foundation, which the Rev. Pat Robertson began in 1985. The foundation split from Mr. Robertson in 1988 but continued to advance what its mission statement calls “God’s purpose.” “

Nice to know he has one.

“One of Mr. Skolrood’s biggest victories involved the case of Bridget Mergens, a high school senior in Omaha whose proposal to start an after-school Bible club was rejected by her principal. In 1990, the United States Supreme Court ruled that if groups started and led by students were permitted, religious groups could not be excluded.
In an opinion article in USA Today in 1987, Mr. Skolrood argued that civil libertarians and the courts had used the First Amendment’s religious protections “like a pitchfork” to poke the life out of permissible public religious expression. He argued this position in opposing atheists’ efforts to remove the word “God” from currency, a ban on prayers at graduation ceremonies and many other secular initiatives.”

God was so pleased he continued his campaign of utter indifference to humanity accompanied by famine, flood, drought, disease, pestilence and war.

“In 1987, he gained national prominence by persuading a federal district court judge to ban 44 books from Alabama public schools on the ground that they promoted a godless, humanistic religion. The ruling, reversed on appeal, put “secular humanism” on the same constitutional footing as conventional religions.
“For purposes of the First Amendment,” the federal judge, W. Brevard Hand, wrote, “secular humanism is a religious belief system, entitled to the protections of, and subject to the prohibitions of, the religious clauses. It is not a mere scientific methodology that may be promoted and advanced in the public schools.”
Mr. Skolrood, speaking about the case, said, “Humanism is out of the closet, for the first time.” “

While he stayed in (as I shall explain shortly.)

“He repeatedly fought for religious displays in public places, including advising Chief Justice Roy S. Moore of the Alabama Supreme Court in the justice’s unsuccessful effort to display a monument to the Ten Commandments in his courthouse.
Mr. Skolrood fought a long battle to return a Christmas display to a park in Ottawa, Ill., after it was banned by a federal judge and a federal appeals court panel. In a rare move, the full United States Court of Appeals for the Seventh Circuit, in Chicago, then reheard the case in May 1992 and ruled 11 to 0 that public forums must be open to religious speech.
Mr. Skolrood had argued that prohibiting the display of religious paintings in a public park was “pure censorship.” He said the American Civil Liberties Union “supposedly abhors” censorship except for “when it comes to religion.” “

But it also abhors bullies. Hard to “balance things out,” no?

“He fought against gay rights by helping to word an initiative on the Colorado ballot in 1992 that would have barred any special protection for homosexuals. The amendment to the state’s constitution passed but was struck down by the United States Supreme Court four years later.
Mr. Skolrood helped to draft an amendment to the Cincinnati City Charter to similarly deprive homosexuals of specific legal protections; voters approved the measure in 1993.
A federal appeals court upheld the result, and the United States Supreme Court in 1998 refused to hear an appeal. “

And as a result Cincinnati was rid of all homosexuality. PRAISE JESUS!!!

“Robert Kenneth Skolrood was born on May 17, 1928, in Stockton, Ill. He grew up in Rockford, Ill., where his father worked as a mechanic. After graduating from high school, he worked two years before entering Ohio Wesleyan University, from which he graduated in 1952.
He then served two years in the Army, rising to the rank of sergeant. He graduated from the University of Chicago Law School in 1957, and he then had a private law practice in Rockford for 23 years.
In 1980, he moved to Tulsa, Okla., to teach at Oral Roberts University Law School. After a year of teaching, he became Mr. Roberts’s personal lawyer. He left in 1985 to go to Virginia Beach to help start the National Legal Foundation.”

But now we get to the good part.

“In 2002, when he was semi-retired, Mr. Skolrood was arrested on charges of uttering obscenities and making sexual advances toward a male undercover police officer at an overlook on the Blue Ridge Parkway. He denied all the charges at a trial before a federal magistrate in Roanoke, Va., but he pleaded no contest to disorderly conduct, a misdemeanor, and paid a $125 fine.
According to The Roanoke Times, Magistrate Judge Glen Conrad said, “That area has been notorious for problems of an unsavory sort,” adding that “there’s no question that you shouldn’t have been there.” “

Oh my stars! Whatever did he say to the nice young hot throbbing toe-tapping undercover police officer ? Oh to have been a fly on that men’s room wall.

“Mr. Skolrood is survived by his wife of 52 years, the former Marilyn Riegel; his sons Mark, of Roanoke, Kent, of Atlanta, and Rick, of Costa Rica; his daughter, Cindi Russi of Venice; and 12 grandchildren.”

Many of whom I’m sure can be found in Palm Springs.

As for what Mr. Skolrood, and his wig, are facing now, a Berlin named Irving put it best.

“Oh
I got a message from below
‘Twas from a man I used to know
About a year or so ago
Before he departed
He
Is just as happy as can be
I’ll tell you what he said to me
He said, “If ever you get heavy-hearted

Pack up your sins and go to the devil in Hades
You’ll meet the finest of gentlemen and the finest of ladies
They’d rather be down below than up above
Hades is full of thousands of
Joneses and Browns, O’Hoolihans, Cohens and Bradys
You’ll hear a heavenly tune that went to the devil
Because the jazz bands
They started pickin’ it
Then put a trick in it
A jazzy kick in it
They’ve got a couple of old reformers in Heaven
Making them go to bed at eleven
Pack up your sins and go to the devil
And you’ll never have to go to bed at all

If you care to dwell where the weather is hot
H-E-double-L is a wonderful spot
If you need a rest and you’re all out of sorts
Hades is the best of the winter resorts
Paradise doesn’t compare
All the nice people are there
They come there from ev’rywhere
Just to revel with Mister Devil
Nothing on his mind but a couple of horns
Satan is waitin’ with his jazz band
And his band came from Alabam’ with a melody hot
No one gives a damn if it’s music or not
Satan’s melody makes you want to dance forever
And you never have to go to bed at all!”