Death of an Axiom 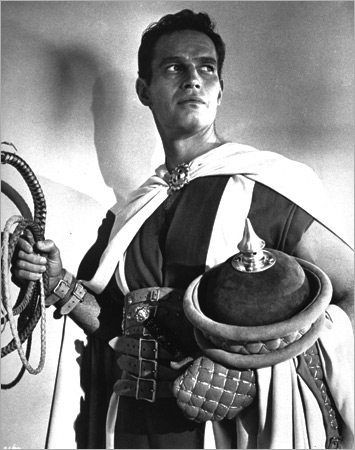 “Charlton Heston is an axiom. He constitutes a tragedy in himself, his presence in any film being enough to instill beauty. The pent-up violence expressed by the somber phosphoresence of his eyes, his eagle’s profile, the imperious arch of his eyebrows, the hard, bitter curve of his lips, the stuendous stregth of his torso — that is what he has been give, and what not even the worst of directors can debase. It is in this sense that one can say that Charlton Heston, by his very existence and regardless of the film he is in, provides a more accurate definition of the cinema than films like Hiroshima Mon Amour or Citizen Kane, films whose aesthetic either ignores or repudiates Charlton Heston.”

So goes the most notorious passage of one of the most controversial piece of film criticism ever written, “In Defense of Violence” by Michel Mourlet, published in Cahiers du Cinema #107,m May 1960. One cannot but recall this signal work by the MacMahonist High Priest now that Moses, Ben-Hur, Michelangelo, El Cid, NRA president et.al. has bought the farm.

Likewise one cannot but recall his appearance in Bowling For Columbine, where auteur/provacateur Michael Moore asks him to comment on NRA policies in light of the famous school shooting — and Heston says . . . .nothing.

Looking back over his credits, one finds a startling amount of stolidity — with occasional flashes of something a lot more interesting. Back in 1941 he had little to offer but his babe-a-liciousness in Peer Gynt, an exceedingly low-budget rendition of Ibsen in which director David Bradley (soon-to-be auteur of the ineffable They Save Hitler’s Brain) decided that the best thing to do was have Chuck wear as little as possible (hubba-hubba.) After another Bradley outing as Marc Anthony in a mini-budget Julius Caesar, Hollywood came calling with the rather interesting noir Dark City which paired Heston with the wonderful Lizabeth Scott. Cecil B. DeMille took notice and had Heston barking orders as a circus manager in that most maudit of all Oscar-winners, The Greatest Show on Earth. King Vidor’s Ruby Gentry cast him far more interestingly as the object of Jennifer Jones’ invariably ravenous attention. Then came The Naked Jungle which co-starred him with killer ants and Eleanor Parker (in that order) and Secret of the Incas where he played iconographic second fiddle to Yma Sumac.

From the moment it first appeared it was clear that The Ten Commandments was something special. The sum-total of DeMille’s long and successful career as the cinema’s zestiest and most shamefully go-for-broke melodramatist it established Heston as the cinema’s primary Immovable Love Object. No matter how delightful his young Moses looked running around in a tea-towel, he wasn’t about to give an inch to the understandably upset Queen Neferitri (Anne Baxter) — whose sexual lusts were further complicated by ultra-humpy Pharoah (Yul Brynner.) Here she was with two gorgeous men to choose from and she gets hung up on the one she can’t have. Not that this entirely displeased the hubster. Hot stuff for 1956. In fact this soto voce sado-masochism would not see its like again until Edward Albee’s Who’s Afraid of Virginia Woolf.

But then came the film I’ll best remember him for. Heston has been quite eleoquent about it and gave a most memorable address at the DGA memorial to Welles.

What followed was Heston’s “Granite Phase”:
Ben-Hur,
El Cid, 55 Days at Peking, Major Dundee, and The Agony and the Ecstasy.

The Mann, the Ray and the Peckinpah are not without interest. The others are best passed over in silence — save for the discreet chuckles of Gore Vidal.

Vidal has famously commented on Heston in
Get Hur , to Heston’s considerable annoyance.

“Wyler groaned: ‘These Romans. . .Do you know anything about them?’ I said, yes, I had done my reading. Wyler stared at me. ‘Well,’ he said, ‘when a Roman sits down and relaxes, what does he unbuckle?’
That spring I rewrote more than half the script (and Wyler studied every ‘Roman’ film ever made). Whe I was finished with a scene, I would give it to [Sa] Zimbalist [the film’s producer]. We would go over it. Then a scene would be passed onto Wyler.”

“The plot of Ben-Hur is, basically, absurd and any attempt to make sense of it would destroy the story’s awful integrity. But for a film to be watchable the characters mus tmake some kind of psychological sense.”

And thuis the central connundrum of why Massala (Stephen Boyd) starts a life-long vendeta against his childhood friend Ben-Hur (Heston).

“I thought of a solution, which delivered into Wyler’s good ear. ‘As boys they were lovers. Now Messala wants to continue the affair, Ben-Hur rejects him. Messala is furious. Chagrin d’amour, the clasic motivation for murder.’

Wyler looked at me as if I’d gone mad.”

No surprise there. And no surprise that he agreed to go along because “anything is better than what we’ve got.” And so Boyd was told about his motivation, but not Heston. For Wyler cautioned “Don’t ever tell Chuck what it’s all about, or he’ll fall apart.” One can only wonder why Heston, who began his acting career under the direction of David Bradley, and continued the better part of it running around half-naked, would “fall apart” over the notion of an off-screen, backstory love affair with Stephen Boyd. But then how could the man who marched with the embodiment of non-violent protest Martin Luther King turn around and head the NRA?

Perhaps clues can be found in the last act of Heston’s film career which is climaxed by Planet of the Apes, in which not only his heoric demeanor but physical self is brought low, and continues with the dystopian horror of Soylent Green.

“Get your hands off me you damned dirty ape!”

are right up there with

“I know what you meant to do, it’s what you did I don’t like!” (from The Wild Bunch)

By playing Richelieu was Heston trying to tell us something?

Better stick with Marlene Dietrich at the end of Touch of Evil : “He was some kind of man. What does it matter what you say about people?”

And on that note, here’s that great film’s famous opening shot.