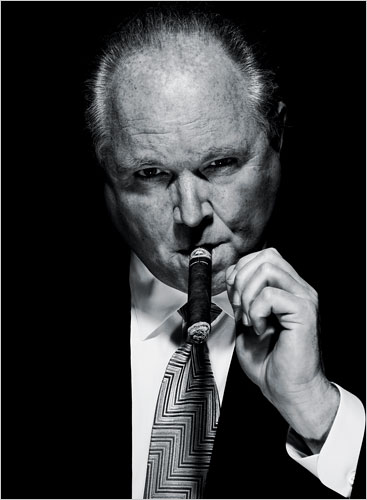 Hey, white boy, what you doin uptown?
Hey, white boy, you chasin our women around?
Oh pardon me sir, its the furthest from my mind
I’m just lookin for a dear, dear friend of mine
I’m waiting for my man

Up to a brownstone, up three flights of stairs
Everybodys pinned you, but nobody cares
Hes got the works, gives you sweet taste
Ah then you gotta split because you got no time to waste
I’m waiting for my man

The song of course is about real heroin. These days the NYT is only interested in the Hillbilly kind.

“After the show, Limbaugh and I sat in the studio for several hours talking. He was in an expansive mood, and he didn’t duck when I asked him about the most infamous chapter of his career, his drug bust. In 2006, after years of addiction to painkillers, Limbaugh was charged in Florida with “doctor shopping” prescriptions. He pleaded not guilty and cut a deal; the charges would be dismissed after 18 months if he continued rehabilitation and treatment with a therapist.
Needless to say, the case became a national scandal. His enemies jeered that the white knight of American conservatism was a junkie. His fans feared the scandal might end his career. Some prayed for him. Limbaugh’s lawyer, Roy Black, hired a Florida psychologist, Steve Strumwasser, to evaluate his client.
“I assessed Rush, and I saw he had a problem he couldn’t control,” Strumwasser told me in a phone interview authorized by Limbaugh. “I knew his name and what he did for a living, but that’s about it.”
Strumwasser recommended that Limbaugh check into the Meadows, in Wickenburg, Ariz., a rehab center that specializes in celebrities.
“They guarded his privacy, but other than that, he was treated like everybody else,” said Strumwasser, who traveled with him to Arizona and checked him in. “Rush did individual therapy, took part in group sessions and got along with everybody.”
According to Strumwasser, Limbaugh had previously tried twice to stop using drugs on his own and failed. “It takes most people a lot of time to assume personal responsibilityfor an addiction,” he said. “Especially in a case like this, where there is a professional risk involved. But by the time I met him, Rush wasn’t denying his problem at all. He went about getting better in a very passionate way.”
The passion was muted when Limbaugh returned to the air, after six weeks. He candidly but drily, discussed his addiction and legal status, told his listeners that he was not a victim and then went on with the broadcast.
In the studio the day we spoke, Limbaugh was more emotional. “I thank God for my addiction,” he told me. “It made me understand my shortcomings.” Being Limbaugh, he said he believes that most of these shortcomings stemmed from his inability to love himself sufficiently. “I felt everyone who criticized me was right and I was wrong,” he confided. “

You got it right the first time, fat boy. Isn’t it sweet to have so many friends in high places? Rusty doesn’t have what it takes, like Downey. Wouldn’t have lasted a nanosecond in the slammer.

As expected a passing mention of yours truly is included in this hagiographic circle jerk.

“So far Limbaugh’s tactic has been to frame his attacks on Obama in the words of liberals themselves. Among the musical parodies, which he writes with the comedian Paul Shanklin, in his arsenal is “Barack the Magic Negro,” sung to the tune of “Puff the Magic Dragon,” by a dead-on Al Sharpton impersonator. The song was met by indignation when he first played it in March – until Limbaugh revealed that the title and the idea of Obama as a redemptive black man à la Sidney Poitier – came from an op-ed piece written by a black commentator, David Ehrenstein, in The Los Angeles Times.”

Well it doesn’t. But there’s no arguing with the criminal upper classes of the fourth estate, currently searching for the next Judy Miller.

Let’s conclude with a chorus from a junkie I deeply respect.