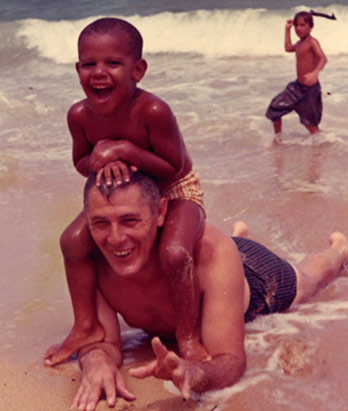 The facts are very much in dispute:

“I want to take this opportunity to speak directly to those of you who oppose my decision to support the FISA compromise.
This was not an easy call for me.”

Ah yes. it’s all about you, isn’t it now Barry.

” I know that the FISA bill that passed the House is far from perfect. I wouldn’t have drafted the legislation like this, and it does not resolve all of the concerns that we have about President Bush’s abuse of executive power. It grants retroactive immunity to telecommunications companies that may have violated the law by cooperating with the Bush administration’s program of warrantless wiretapping. “

Well as the invaluable Glenn Greenwald has explained in considerable detail, calling what BushCo did a “program” rather than the criminal act it actually is, makes where you “stand on the issue” (as the meat puppets love to say) quite clear. You’re giving them a pass.

Can you say “Unindicted Co-Conspirator,” Barry?

“This potentially weakens the deterrent effect of the law and removes an important tool for the American people to demand accountability for past abuses.”

Tha law is more than an “effect,” dear.

“That’s why I support striking Title II from the bill, and will work with Chris Dodd, Jeff Bingaman and others in an effort to remove this provision in the Senate.”

“But I also believe that the compromise bill is far better than the Protect America Act that I voted against last year. The exclusivity provision makes it clear to any president or telecommunications company that no law supersedes the authority of the FISA court. In a dangerous world, government must have the authority to collect the intelligence we need to protect the American people. But in a free society, that authority cannot be unlimited. As I’ve said many times, an independent monitor must watch the watchers to prevent abuses and to protect the civil liberties of the American people. This compromise law assures that the FISA court has that responsibility.”

Uh, no. It assures that the barn door will be closed after the horses have been carted away to the glue factory. It’s all very simple really. Who has power? “We the people,” or President Low Normal and those coming in his wake who choose to profit from his crimes?

“The Inspectors General report also provides a real mechanism for accountability and should not be discounted. It will allow a close look at past misconduct without hurdles that would exist in federal court because of classification issues. The recent investigation (PDF) uncovering the illegal politicization of Justice Department hiring sets a strong example of the accountability that can come from a tough and thorough IG report.”

And we all know what action that “tough and thorough” report is going to produce, don’t we?

“The ability to monitor and track individuals who want to attack the United States is a vital counter-terrorism tool, and I’m persuaded that it is necessary to keep the American people safe — particularly since certain electronic surveillance orders will begin to expire later this summer.”

“Keep the American people safe.” Such a lovely mantra du jour. So pleasant-sounding. So utterly fraudulent.

“Given the choice between voting for an improved yet imperfect bill, and losing important surveillance tools, I’ve chosen to support the current compromise.”

“Between grief and nothing I will take grief” — William Faulkner (via Jean Seberg.)

We know all about the “imperfect,” Barry. That’s why there’s nothing “improved” at all. Cheap thuggery is cheap thuggery — pure and simple. Even though you’d like us all to believe it isn’t.

” I do so with the firm intention — once I’m sworn in as president — to have my Attorney General conduct a comprehensive review of all our surveillance programs, and to make further recommendations on any steps needed to preserve civil liberties and to prevent executive branch abuse in the future.”

“Now, I understand why some of you feel differently about the current bill, and I’m happy to take my lumps on this side and elsewhere. For the truth is that your organizing, your activism and your passion is an important reason why this bill is better than previous versions. No tool has been more important in focusing peoples’ attention on the abuses of executive power in this administration than the active and sustained engagement of American citizens. That holds true — not just on wiretapping, but on a range of issues where Washington has let the American people down.”

Isn’t that lovely? He’s thanking us for all our efforts to give him advice he has no intention of taking.

“I learned long ago, when working as an organizer on the South Side of Chicago, that when citizens join their voices together, they can hold their leaders accountable. “

“I’m not exempt from that. I’m certainly not perfect, and expect to be held accountable too. I cannot promise to agree with you on every issue. But I do promise to listen to your concerns, take them seriously, and seek to earn your ongoing support to change the country.”

Consider this your cue, dear reader, to check to see if your pocket hasn’t been picked. Cause here comes the pitch!

“That is why we have built the largest grassroots campaign in the history of presidential politics, and that is the kind of White House that I intend to run as president of the United States — a White House that takes the Constitution seriously, conducts the peoples’ business out in the open, welcomes and listens to dissenting views, and asks you to play your part in shaping our country’s destiny.”

Love the “listens.” So sincere. And if you can fake sincerity you’ve got it made.

“Democracy cannot exist without strong differences. And going forward, some of you may decide that my FISA position is a deal breaker. That’s ok. But I think it is worth pointing out that our agreement on the vast majority of issues that matter outweighs the differences we may have. “

Well now, isn’t that special? Who’s doing the weighing, sport? And what, precisely is being weighed?

“After all, the choice in this election could not be clearer.”

That’s what everyone keeps telling us. I remain dubious.

To put it mildly.

“Whether it is the economy, foreign policy, or the Supreme Court, my opponent has embraced the failed course of the last eight years, while I want to take this country in a new direction. Make no mistake: if John McCain is elected, the fundamental direction of this country that we love will not change.”

Make no mistake: if Barack Obama is elected, the fundamental direction of this country that we wish we could love, but in no morally rational way can, will not change.

“But if we come together, we have an historic opportunity to chart a new course, a better course.
So I appreciate the feedback through my.barackobama.com, and I look forward to continuing the conversation in the months and years to come. Together, we have a lot of work to do.”

Can the “together” bit, Barry. YOU have a lot of work to do.

And there’s no way you’re going to do any of it.

But hey — I’m a forgiving guy. Look — here’s a campaign song for ya’. It’s not new, but doesn’t everyone love an “oldie”?

“Why weep or slumber America
Land of brave and true
With castles and clothing and food for all
All belongs to you
Ev’ry man a king, ev’ry man a king
For you can be a millionaire
If there’s something belonging to others
There’s enough for all people to share
When it’s sunny June and December too
Or in the winter time or spring
There’ll be peace without end
Ev’ry neighbor a friend
And ev’ry man a king”