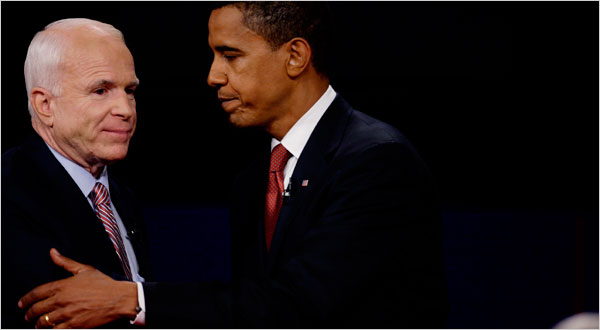 I could barely watch the “deate” last night. Quotes are required as no “debate” ever transpires in these joint public appearances. It’s a “Beauty Contest” all the way with Image Over Substance at every step. If you’re my age you doubtless recall the Kennedy-Nixon “debate” in which JFK’s handsome youthfulness trounded “Tricky Dick’s ” five o’clock shaodow, despite the fact that he had little of any real significance to say. This time out Obama’s composed cool won out over McCain’s rude smugness verging on angry explosion. One was expecting him to pop a vein any moment. In fact no less a meat puppet eminence than Tweety Matthews was astonished by McCain’s adamant refusal to so much as glance at Obama.

If you have a mother like mine then you know such behavior is unconscionable. But as he and his bought-and-paid-for media whores never cease to remind us, John McCain is a “War Hero” and therefore not subjec to the rules that govern the rest of us.

Or so they and he imagine.

How McCain actually came off as a “Separated at Birth” from Dr. Emilio Lizardo

Barack Obama, meanwhile, maintained the composed cool of that suavest of all biracial superheroes
Buckaroo Banzai.

What Lord John Worfin McCain fails to realize is what Barack Banzai throughly understands — “No matter where you go — there you are.”