No, not the cheery “Josephine” — so memorably embodied by the great Jane Withers 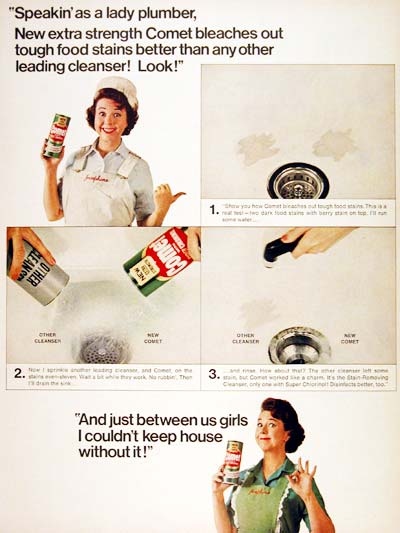 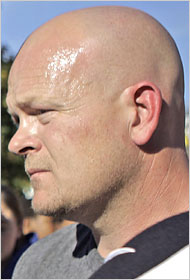 “Perhaps even more than Senator Barack Obama’s night or Senator John McCain’s night, the last presidential debate turned out to be the night of “Joe the Plumber.”
Repeatedly over the 90 minutes in which they sharply criticized each other, both candidates referred to Joe Wurzelbacher, an Ohio plumber, as a kind of proxy for all of the country’s working people.
How did that come about? Over the weekend, Mr. Obama was campaigning near Toledo when Mr. Wurzelbacher, a burly, bald man with a goatee, approached the candidate to confront him with the ultimate bread-and-butter question.”

Indeed it is. But no more surreal than you “Mr. Clean”-styled self. (Who isn’t even registered to vote!) And pardon me for asking but weren’t you married last week to Larry the Cable Guy in San Diego? I could have sworn I saw it on You Tube.

Less a question than a soundbite, really. A “readymade” for the media whores.

“I’m getting ready to buy a company that makes $250,000 to $280,000 a year,” he told Mr. Obama. “Your new tax plan is going to tax me more, isn’t it?”
Mr. Obama acknowledged that might turn out to be the case. He talked about the tax credits he plans to offer if elected, listened respectfully as Mr. Wurzelbacher offered the notion of a flat tax, but ended up defending his own position before shaking Mr. Wurzelbacher’s hand and wishing him well.
Mr. McCain seized on that encounter in Wednesday night’s debate, citing “Joe the Plumber” as a symbol of how Mr. Obama’s tax policies would hurt small businesses.
Since his initial exchange with Mr. Obama, Mr. Wurzelbacher has become a favorite of anti-Obama bloggers and television commentators. On Neil Cavuto’s program on Fox News, for example, he was asked if Mr. Obama’s response about “spreading the wealth around” satisfied him, and gave an explanation that the McCain campaign was quick to send around to reporters.
“His answer actually scared me even more,” Mr. Wurzelbacher said. “He said he wants to distribute wealth. And I mean, I’m not trying to make statements here, but, I mean, that’s kind of a socialist viewpoint. You know, I work for that. You know, it’s my discretion who I want to give my money to; it’s not for the government decide that I make a little too much and so I need to share it with other people. That’s not the American Dream.”

Ah yes, The American Dream — a “readymade” fantasy based on the pretense of a “classless” society in which all triumph through merit and the “honest sweat” of “a good day’s work.”

During the debate, calls to Mr. Wurzelbacher’s residence went unanswered. But he has described himself as a resident of a neighborhood of houses worth $90,000 to $140,000, and told Mr. Obama he has been a plumber for 15 years. Tracked down by The Associated Press, Mr. Wurzelbacher declined to say which candidate he would vote for. But he seemed astonished at his sudden emergence as a symbol of the American working class.
“It’s pretty surreal, man, my name being mentioned in a presidential campaign,” he said.

No less surreal than your comparasion of Barack Obama to Sammy Davis Jr.

Is Sammy the only other “negro” you know Joe?

So will Americans who are in business for themselves have to pay more taxes if Mr. Obama is elected, as Mr. McCain asserted?
According to figures compiled by the Small Business Administration, there are fewer than six million small businesses that actually have payrolls. The rest are so-called nonemployer firms that report income from hobbies or freelance work done by their registered owners, earning as little as $1,000 a year.
Of these, according to a calculation by the independent, non-partisan Tax Policy Center, fewer than 700,000 taxpayers would have to pay higher taxes under Mr. Obama’s plan. But even some of these are not small-business owners in the traditional sense; they include lawyers, accountants and investors in real estate, all of them with incomes that put them in the top tax brackets.
So are there “millions more like Joe the Plumber,” as Mr. McCain contended? Probably not. Mr. Obama may well have been correct when he stated that “98 percent of small businesses make less than $250,000.”

Probably not? Then call Central Casting!

Yep — We’re All in This Together.

So Take it Away, Susan!