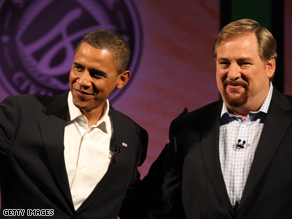 “President-elect Barack Obama’s swearing-in ceremony will feature big names like minister Rick Warren and legendary singer Aretha Franklin, the Congressional Committee on Inaugural Ceremonies announced Wednesday.
Warren, the prominent evangelical and founder of the Saddleback Church in Lake Forest, California, will deliver the ceremony’s invocation. The minister hosted a presidential forum at his church last summer that challenged both Obama and Arizona Sen. John McCain on a host of faith-related issues. Warren did not endorse either presidential candidate.
His public support for California’s Proposition 8 — the measure that successfully passed and called for outlawing gay marriage in the state — sparked the ire of many gay rights proponents, who seized on a comment in an October newsletter to his congregation: “This is not a political issue — it is a moral issue that God has spoken clearly about.”
But Warren has long sought to broaden the focus of the evangelical agenda to include issues like the reduction of global poverty, human rights abuses, and the AIDS epidemic.
Also included in the inaugural program are cellist Yo-Yo Ma, the United States Marine Band, and other performers.”

And if you want more, here’s a video interview with the lying motherfucker.

There’s nothing more to say ‘cept Barry — you are DEAD to me.

Sing us out, Aretha.