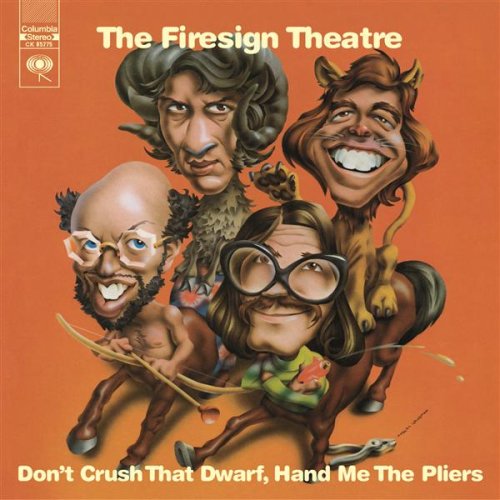 Lately I’ve become terribly superfond of The Drowsy Chaperon, a hit musical I somehow managed to miss but have become quite familiar with due to this spectacular clip and the Original Cast Album. In many ways that’s appropriate as the entire premise of the show revolves around an original cast album, and a lonely, possibly ill, obviously gay show queen, billed with Beckett-like succinctness as “Man in Chair.”

“Man in Chair” declares he’s periodical “Blue” — and when in uch condition likes to “listen to my music.” So do I. Everything from DoDo Day to The B-52’s.

But I also like to listen to the spoken word. That’s why I was so pleased to discover that someone had put The Firesign Theatre’s masterpiece Don’t Crush That Dwarf, Hand Me the Pliers up on You Tube

There are no accompanying images, but DCTDHMTP doesn’t need them.

It was released by Columbia records in 1970, right after Kent State

For those of you either too young to remember, or as yet unborn thus making memory impossible, the Kent State Massacre was the turning point in the anti-vietnam War protest movement. There had been many demonstrations before, and many arrests and dust-ups. But never had the United States government ordered its National Guard troops — the very troops that have been requisitioned to fight our ceaseless campaign in Iraq and Afganistan (and please do not continue to operate under the illusion that Barack Obama has any intention of ending them.) What was different was that rather than “gooks” or “niggers” middle-class whites were the target. Thus the game was changed and for not a short while a pall hung in the American air.

Don’t Crush That Dwarf, Hand Me the Pliers alleviated it. The recording was of course concieved and executed prior to the Kent State massacre, but it’s arrival on its heel seemed almost to be an answer–a rational explanation of who we were and where we were going disguised as a “comedy album.”

Neither time not custom have diminished its relevance and impact – as all of us Communist Martyrs High graduates living in Sectors R and M well know.

And now, in memory of a man I loved who died quite some time ago, a little Mozart