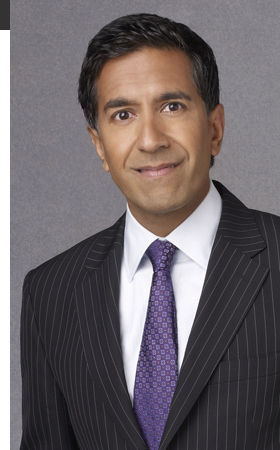 No surprise that Mr. Sheri Annis would be delighted.

“For a few seconds, I was puzzled by the notion of Sanjay Gupta as surgeon general.
He’s a real-live neurosurgeon, yes, but I primarily think of him as a television guy: a CNN host and contributor to the “CBS Evening News” and “60 Minutes.”
But as I thought about it, the idea made sense. What does a surgeon general do? He’s a television salesman for health policy. (Gupta once told me that doing TV isn’t brain surgery–it’s harder.) He would give the administration a smooth broadcast presence, the knowledge of medical professional, a top aide of Indian descent and the panache of one of People’s “Sexiest Men Alive.” (Don’t laugh. Women, I am learning, just drool over this guy, with entire sites devoted to gushing over his hunkiness.)”

Well in that case, why not Chris Evans? “Is this another case of media people defecting to Obamaland, as with Time’s Jay Carney and ABC’s Linda Douglass? I don’t think it’s in the same category. Gupta is mainly being hired as a physician who happens to have phenomenal TV skills”

Thankfully Paul Krugman remembers just what those skills are.

“I don’t have a problem with Gupta’s qualifications. But I do remember his mugging of Michael Moore over Sicko. You don’t have to like Moore or his film; but Gupta specifically claimed that Moore “fudged his facts”, when the truth was that on every one of the allegedly fudged facts, Moore was actually right and CNN was wrong.
What bothered me about the incident was that it was what Digby would call Village behavior: Moore is an outsider, he’s uncouth, so he gets smeared as unreliable even though he actually got it right. It’s sort of a minor-league version of the way people who pointed out in real time that Bush was misleading us into war are to this day considered less “serious” than people who waited until it was fashionable to reach that conclusion. And appointing Gupta now, although it’s a small thing, is just another example of the lack of accountability that always seems to be the rule when you get things wrong in a socially acceptable way.”

And here to sing us out is one of Nico’s most memorable boyfriends.