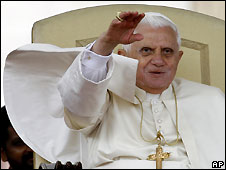 “One of the Vatican’s most secrecy shrouded tribunals, which handles confessions of sins so grave only the pope can grant absolution, is giving the faithful a peek into its workings for the first time in its 830-year history.”

“The Vatican has long lamented that fewer and fewer Catholics are going to confession, the sacrament in which the faithful can receive forgiveness if they sincerely confess their sins to a priest.
To combat the decline, the so-called “tribunal of conscience” invited the public into the frescoed halls of its imposing 16th-century palazzo for a two-day conference that ended Wednesday.”

“The aim was to explain what the Apostolic Penitentiary actually does, and thereby encourage more of the faithful to go to confession, said Monsignor Gianfranco Girotti, the tribunal’s No. 2 official.
“Even though it’s the oldest department of the Holy See, it’s very little known — specifically because by its nature it deals with secret things,” he said. “We want to relaunch the sacrament of penance.”
By lifting the veil of secrecy surrounding the tribunal’s work, the Vatican hopes to emphasize the fundamental role the sacrament plays in saving souls, the Vatican’s No. 2, Cardinal Tarcisio Bertone, said in a paper delivered at the conference.
“Today it seems as though the sense of sin has been forgotten,” he said”

“Confessions of even the most heinous of crimes and sins — such as genocide or mass murder — are handled at the local level by priests and their bishops and are not heard by the tribunal.”

“Its work involves those sins that are reserved for the pope — considered so serious that a local priest or bishop is not qualified to grant absolution, said Cardinal James Francis Stafford, an American who heads the Apostolic Penitentiary.
These include defiling the Eucharist, which Catholics believe is the body and blood of Christ. Stafford said this offense is occurring with more and more frequency, not just in satanic rites but by ordinary faithful who receive Communion and then remove the host from their mouths and spit it out or otherwise desecrate it.”

“Others include a priest breaking the seal of the confessional by revealing the nature of the sin and the person who sought penance, or a priest who has sex with someone and then offered forgiveness for the act.”

A fourth type of case that comes to the tribunal involves a man who directly caused an abortion — such as by paying for it — who then seeks to become a priest or deacon, Stafford said.
“That is an irregularity and it means he should not receive the ordination without a dispensation from the pope,” he said.”

“Vatican officials frequently point to a study carried out by Italy’s Sacred Heart University that found that 47 percent of people in Italy — a majority Roman Catholic country — never went to confession or did so a long time ago.
“We cannot hide that the sacrament of penance is threatened in this time of secularization,” Girotti said. But he stressed that it remained “fundamental for salvation and the sanctification of souls.”

For the most part, clerical sex abuse cases are handled by another Vatican office, the Congregation for the Doctrine of the Faith, which deals with more public issues of discipline and orthodoxy.
What makes the Apostolic Penitentiary unusual by Vatican standards is the speed with which it dispenses decisions, Girotti said — very often within 24 hours, or two to three days maximum.”

“The palazzo where it operates, in the heart of Rome’s historic center, also houses two of the Vatican’s other main tribunals, the Roman Rota, which decides marriage annulments, and the Apostolic Segnatura, the Holy See’s highest court.
Taking up nearly an entire city block, it is just steps away from one of Rome’s most profane piazzas — Campo dei Fiori, filled with bars catering to tourists and college-age Americans studying abroad.”

Take it away TOM!