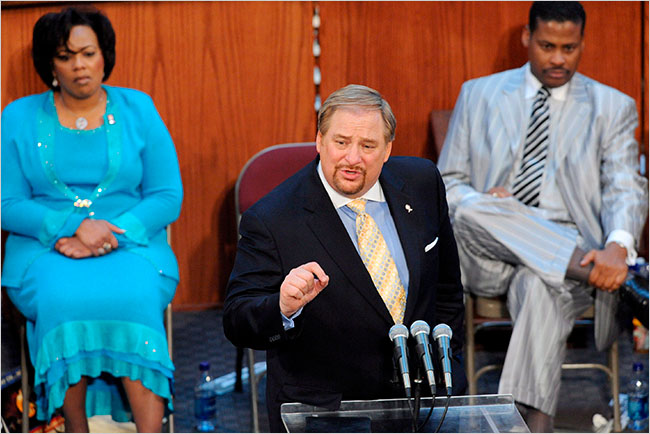 The facts are less in dispute than hidden from view.

“The Rev. Rick Warren made an important stop here Monday on his way to Washington to deliver the invocation at the presidential inauguration: he gave the keynote address at the annual birthday service for the Rev. Dr. Martin Luther King Jr. at the church Dr. King called home, Ebenezer Baptist.
And just as Mr. Warren’s part in the inauguration ceremony has been criticized because of his stands against same-sex marriage and abortion rights, demonstrators here denounced his prominent place on Monday’s program.”

And the reason why he’s here is the woman on the left, Bernice King. A relentless homophobe who years ago broke with her late mother and other members of the King family in her ceaseless attacks on LBGT citizens regardless of race, Bernice controls the church that was once her father’s home. As any student of African-American history knows the Rev. Dr. Martin Luther King was not only far from homophobic, he owed an enormous portion of his succes to a black gay man named Bayard Rustin. It was Rustin who planned the famous march on Washington but was unable to take credit for it because a viscious closet queen named J.Edgar Hoover threatened to “out” Rustin”s “vice” arrest from several years before — when he was caught canoodling in a parked car — the sort of thing no policeman would interfere with were the parties involebd of differnet genders. Rustin graciously allowed King to give A. Phillip Randolph credit for the march. But King never turned his back on his most important ally and Rustin can be seen standing right alongside the great civil rights leader in footage of the “I Have a Dream” speech.

A speech, let us not forget, that didn’t get into the first gragh of coverage of that famous march. The “Mainstream” media was far too concerned with noting how “orderly” the marchers were having expected a full-scale riot.

Back to Rick the Dick —

“Mr. Warren has declined to give interviews about either of his appearances.
For his address Monday, he borrowed a theme from an anthem of the civil rights movement, “We Shall Overcome,” saying humility, integrity, generosity and community were the means of overcoming adversity.”

“Adversity” being the LBGT communities that have been fighting back against his lies and insults.

“Martin Luther King was a mighty tool in the hand of God, but God isn’t through,” he said. “Justice is a journey, and we’re getting further and further along.”
He did not mention homosexuality or abortion.
About 100 protesters gathered outside with signs that read, “No bigotry in MLK’s church” and “We still have a dream.”
Craig Washington, who manages an AIDS prevention program, said, “We can agree to disagree, but we cannot build bridges by rewarding those who build walls to lock people out.”
Several protesters said Mr. Warren’s invitation to the inauguration, where the president-elect is striving for an image of national unity, was more palatable than his appearance at a service honoring Dr. King, whose message centered on tolerance.
But Isaac Newton Farris Jr., president of the King Center, which organizes the annual service on the King holiday, defended the choice of Mr. Warren. Introducing him, Mr. Farris said from the pulpit that the “beloved community” that Dr. King tried to build had room for liberals and conservatives alike, as well as gay men and lesbians.
“It’s appropriate that we give a fair and courteous hearing to those we may disagree with as we search for common ground to resolve the great conflicts of our times,” said Mr. Farris, Dr. King’s nephew. “Certainly Pastor Warren is on a spiritual journey, like us, and perhaps he can learn from those he disagrees with.”

And perhaps not. Thanks for the passing mention. Very Obamaesque.

Mr. Warren was booked for the service before the election and long before he was invited to participate in the inauguration, King Center officials said.
Before he began speaking, a woman in the audience yelled, “Rick Warren is a bigot!” She and her companions were quickly escorted out. Others in the audience yelled, “We love you, Pastor Warren!”
Without losing composure, Mr. Warren told the audience that a photograph of Dr. King hung on the wall in his office.
“I am going, as you know, to give the invocation tomorrow,” he said. “But this means more to me personally.”

Hey Rick — it means more personally to me too!

Love the woman on the left, don’t you?