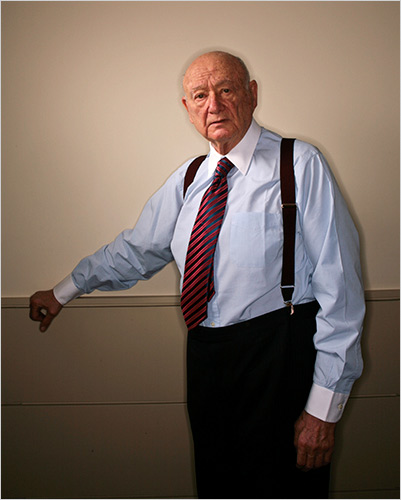 The New York Times can be so decorous.

(For the record, Mr. Koch, a lifelong bachelor, declines to say whether he is gay. “I do not want to add to the acceptability of asking every candidate, ‘Are you straight or gay or lesbian?’ and make it a legitimate question, so I don’t submit to that question. I don’t care if people think I’m gay because I don’t answer it. I’m flattered that at 84 people are interested in my sex life — and, it’s quite limited.”)

Can the false modesty, Ed. The Wiki knows all — and tells most.

Koch is a lifelong bachelor, and his sexuality became an issue in the 1977 mayoral election with the appearance of placards and posters (disavowed by the Cuomo campaign) with the slogan “Vote for Cuomo, not the homo.” Koch denounced the attack, later saying “No, I am not a homosexual. If I were a homosexual, I would hope I would have the courage to say so. What’s cruel is that you are forcing me to say I am not a homosexual. This means you are putting homosexuals down. I don’t want to do that.” He was able to use this to his advantage by painting Cuomo as a homophobic bigot. After becoming mayor, Koch began attending public events with former Miss America, well-known television game show panelist and consumer advocate Bess Myerson. The strategy made Myerson, who had political ambitions of her own (she later ran for senator), seem like a “First Lady of New York” of sorts.
Koch has generally been less explicit in his denials in later life, and refused comment on his actual sexual experiences, writing “What do I care? I’m 73 years old. I find it fascinating that people are interested in my sex life at age 73. It’s rather complimentary! But as I say in my book, my answer to questions on this subject is simply ‘Fuck off.’ There have to be some private matters left.” Randy Shilts, in And the Band Played On, his influential history of the early AIDS epidemic in America, discusses the possibility that Koch ignored the developing epidemic in New York City in 1982–1983 because he was afraid of lending credence to rumors of his homosexuality. Author and activist Larry Kramer has been more pointed in his criticism of Koch. He describes the former mayor as a “closeted gay man” whose fear of being ‘outed’ kept him from aggressively addressing the AIDS epidemic in New York City in the early 1980s.

Oh we know about what the “explicit” portends. And how “periliously” some people live their lives — as this story in the very same issue of the NYT so vividly demonstrates. 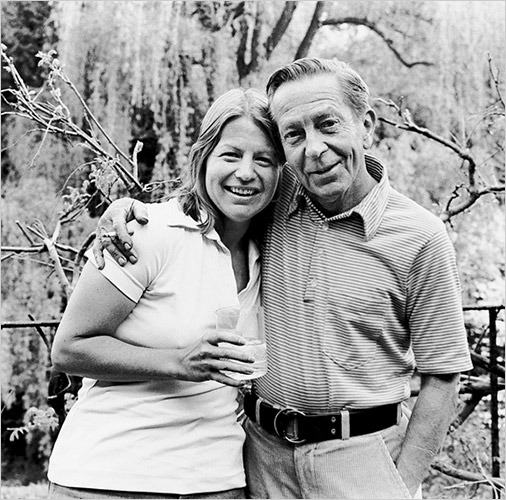 SECRECY, DOUBLENESS, SORROW, the comforts of sex, the perils of alcohol, the suddenness and fleetingness of joy — the themes of Cheever’s fiction were, not surprisingly, the themes of his life. Though it would be a mistake to read him too closely as an autobiographical writer, the life is not without interest and drama of its own. It’s a story of American self-invention — about a self-taught genius who rises to the top of his profession and creates for himself a sustaining, if partly illusory, identity as burgher and family man — and an arduous interior journey, a 20th-century version of “Pilgrim’s Progress,” through sloughs of despond and valleys of shame.
Remarkably, given how difficult and often unhappy Cheever’s life was, his two oldest children, Ben and Susan, became writers. Susan has even written books about her own alcoholism and sex addiction. And the two of them have been the most vigilant stewards of his legacy, tending his copyrights and reprints and trying to ensure that there are enough royalties to keep their mother provided for. The youngest child, Federico, or Fred, as he is known, is a law professor at the University of Denver and leaves most of the literary dealings to his siblings.
Susan Cheever told me recently that she thought her mother had probably guessed Cheever’s secret very early in their marriage, but that the children did not, even toward the end of his life when their father began bringing young men home for meals and to help around. “To say we didn’t have a clue would be disingenuous,” Fred said. “There were clues everywhere, but we just weren’t interested in pursuing them.” (There were clues, not least, in the fiction itself, starting with a section in “The Wapshot Chronicle” that begins, uncomfortably: “And now we come to the unsavory or homosexual part of our tale and any disinterested reader is encouraged to skip.”) “None of us wanted to see that about our father,” Fred went on, “and so none of us did.”
Ben, who had looked at the journals but somehow failed to take them all in, learned of his father’s other life from a phone conversation with him a couple of weeks before Cheever died. Later, he warned his sister, who was then working on what would become “Home Before Dark,” a memoir of her father, that she would discover he was homosexual. She refused to believe him until one afternoon when she went to look at her father’s journals, which were temporarily being stored in a vault on the Upper East Side. “I opened one of the notebooks, and within five minutes I knew my father was gay,” she said recently. “I just happened to look in the wrong, or maybe the right, part. I said, ‘Thanks, Dad, I’m not doing this job for you,’ and I stopped writing about him.”

For. . . The Best of Everything

“(At the end of his career I was Cheever’s editor at The New Yorker, and I also read the work of his protégé Max Zimmer occasionally, and so I have a brief walk-on part in Bailey’s biography.)”

“He embarked upon an affair with a younger man, Max Zimmer, an aspiring writer he met at the University of Utah, that entailed both genuine love (on Cheever’s part) and a degree of coercion and manipulation that Cheever felt guilty about. He kept Zimmer around by getting him into Yaddo and by encouraging him in his writing. With his family and friends, he dissembled and agonized as never before. Only at the very end was he granted something like peace, and by then he was almost too weak to enjoy it.”

Does anybody know what became of Max Zimmer?

Max, if you’re still among us functioning carbon-based life-forms, shoot me an e-mail, OK?

Jane will sing us out