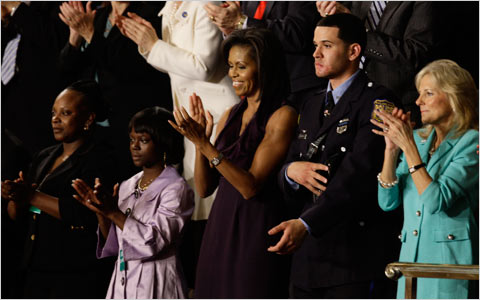 With all the mindless blather the “mainstream” has been heir to over a sleeveless dress, it was only a matter of time before MoDo weighed in. However what’s most interesting about her latest NYT blurt is the way it suddenly changes course, where she usually “moves in for the kill” (or rather what she imagines to be “the kill.”)

Let’s face it: The only bracing symbol of American strength right now is the image of Michelle Obama’s sculpted biceps. Her husband urges bold action, but it is Michelle who looks as though she could easily wind up and punch out Rush Limbaugh, Bernie Madoff and all the corporate creeps who ripped off America.
In the taxi, when I asked David Brooks about her amazing arms, he indicated it was time for her to cover up. “She’s made her point,” he said. “Now she should put away Thunder and Lightning.”

My but Bobo scares easily. Such a sheltered childhood the poor dear must have led, replete with special passes to avoid the physical indignities of gym class.

I’d seen the plaint echoed elsewhere. “Someone should tell Michelle to mix up her wardrobe and cover up from time to time,” Sandra McElwaine wrote last week on The Daily Beast.
Washington is a place where people have always been suspect of style and overt sexuality. Too much preening signals that you’re not up late studying cap-and-trade agreements.
David was not smitten by the V-neck, sleeveless eggplant dress Michelle wore at her husband’s address to Congress — the one that caused one Republican congressman to whisper to another, “Babe.”

He said the policy crowd here would consider the dress ostentatious. “Washington is sensually avoidant. The wonks here like brains. She should not be known for her physical presence, for one body part.” David brought up the Obamas’ obsession with their workouts. “Sometimes I think half the reason Obama ran for president is so Michelle would have a platform to show off her biceps.”

Uh, no I don’t think so. And neither does anyone else with an ounce of sanity.

During the campaign, there was talk in the Obama ranks that Michelle should stop wearing sleeveless dresses, because her muscles, combined with her potent personality, made her daunting.
She ignored that talk, thank heavens. I love the designer-to-J. Crew glamour. Combined with her workaday visits to soup kitchens, inner-city schools and meetings with military families, Michelle’s flare is our depression’s answer to Ginger Rogers gliding around in feathers and lamé.

And President Obama is Fred Astaire? Such compliments!

But as you’ll note, Ginger’s arms are covered. It’s her back that’s completely exposed. Can you imagine the reception the First Lady would get for showing up in the senate in a get-up like this?

Her arms, and her complete confidence in her skin, are a reminder that Americans can do anything if they put their minds to it. Unlike Hillary, who chafed at the loathed job of first lady, and Laura, who for long stretches disappeared into the helpmeet role, Michelle has soared every day, expanding the job to show us what can be accomplished by a generous spirit, a confident nature and a well-disciplined body.
I also have no doubt she can talk cap-and-trade with ease and panache.

Somebody must have slipped MoDo a note about Michelle’s approval rating. Not so easy to dis a wife and mother this popular, is it dear?

As for the perpetually hapless Bobo it’s not the panache that put the frighteners on him. It was “Thunder and Lightning.”

So take it away Tom (with an assist from Jean-Luc, Marushka and Jacques)