None Dare Call It Racism

Quite the deal, wouldn’t you say?

Well what you can’t say is that no one saw this coming.

and that’s not to mention

Meanwhile far from the “Mainstream” — 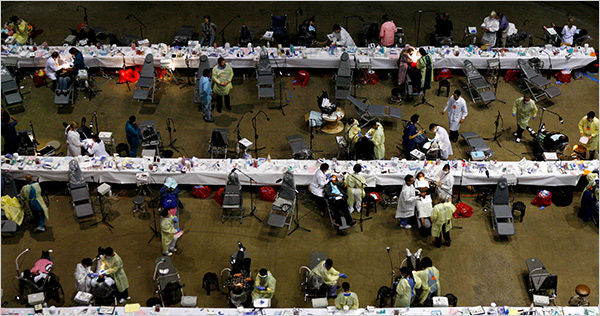 there’s a whole bunch of people who need health care.

INGLEWOOD, Calif. — They came for new teeth mostly, but also for blood pressure checks, mammograms, immunizations and acupuncture for pain. Neighboring South Los Angeles is a place where health care is scarce, and so when it was offered nearby, word got around.
For the second day in a row, thousands of people lined up on Wednesday — starting after midnight and snaking into the early hours — for free dental, medical and vision services, courtesy of a nonprofit group that more typically provides mobile health care for the rural poor.
Like a giant MASH unit, the floor of the Forum, the arena where Madonna once played four sold-out shows, housed aisle upon aisle of dental chairs, where drilling, cleaning and extracting took place in the open. A few cushions were duct-taped to a folding table in a coat closet, an examining room where Dr. Eugene Taw, a volunteer, saw patients.
When Remote Area Medical, the Tennessee-based organization running the event, decided to try its hand at large urban medical services, its principals thought Los Angeles would be a good place to start. But they were far from prepared for the outpouring of need. Set up for eight days of care, the group was already overwhelmed on the first day after allowing 1,500 people through the door, nearly 500 of whom had still not been served by day’s end and had to return in the wee hours Wednesday morning.
The enormous response to the free care was a stark corollary to the hundreds of Americans who have filled town-hall-style meetings throughout the country, angrily expressing their fear of the Obama administration’s proposed changes to the nation’s health care system. The bleachers of patients also reflected the state’s high unemployment, recent reduction in its Medicaid services for the poor and high deductibles and co-payments that have come to define many employer-sponsored insurance programs.
Many of those here said they lacked insurance, but many others said they had coverage but not enough to meet all their needs — or that they could afford. Some said they were well aware of the larger national health care debate, and were eager for changes.
“I am on point with the news,” said Elizabeth Harraway, 50, who is unemployed and came for dental care. “I think the president’s ideas are awesome, and I believe opening up health care is going to work.”

Sing us out Ann.