“It was speculated about for years, and the famous author himself hinted about it many times, but on ABC’s “Good Morning America” today (Dec. 15), the writer’s son Griffin Dunne, confirmed that Dominick Dunne was bisexual.”

That crash you just heard was the fall of one of the world’s biggest and most screamingly obvious hairpins.

“Not only did the actor/producer talk about his dad’s despair after his actress daughter Dominique Dunne was murdered by a former boyfriend, but he discusses the character Gus Bailey in the author’s last book “Too Much Money,” which was released this week. The semi-autobiographical novel revealed a lot about the real man behind the flamboyant public figure.
He wasn’t good at keeping some secrets, but he did keep his bisexuality a secret.”

As many have known Dunne was the model for the “is he or isn’t he?” interloper in his good friend Mart Crowley’s classic play The Boys in the Band. In fact he went on to produce the movie version.

“Dunne wrote in his latest book: “I’m nervous about the kids, even though they are middle aged men now, not that they don’t already know. I just don’t talk about it. It’s been a life-long problem.”
His son said on the TV news show that it was just like his dad to “finally come out and then leave. It was hardly a big deal either way. He was was closeted about heterosexuality as much as bisexuality as he was about celibacy. He didn’t have boyfriends or lovers, they were never part of our lives.”

Well he may not have been a part of Griffin’s life, but his father had one very spectacular boyfriend, Frederick Combs. 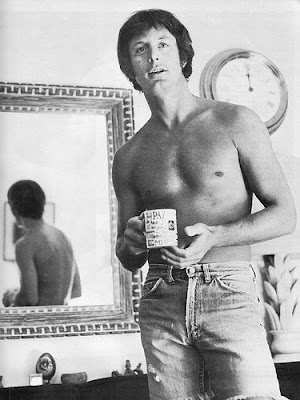 Dunne acknowleged that Combs, who was “Donald” in the play and the film, was his drug dealer during a particularly desultory period of his life.

Combs, who died of AIDS in 1992, tried to establish himself as a playwright and actor post-Boys, but never quite made it. A shame cause he really had it.

Toward the end of the writer’s life—he died this past summer of cancer—Griffin went to a clinic in Germany where Dunne was getting stem cell treatments. He met a man, Norman, who obviously had a “long loving relationship” with his father and was “looking after him.”

Norman, is that WHO?

“He was married for 11 years and had five children. He is the brother-in-law of writer Joan Didion and older brother to writer John Gregory Dunne.
In one of his last interviews for The Times of London, Dunne labeled himself “a closeted bisexual celibate” but declined to elaborate. Whatever, he was a great writer and a cool character.”

I trust all this definitive goss will make its way into the final cut of Making the Boys — a new documentary about The Boys in the Band featuring ME.

Meanwhile, as luck would have it, it’s Noel Coward’s Birthday. Noel knew all about men like Dominick Dunne. And a whole lot more.

Sing us out Rufus!