On this day 63 years ago Gian-Carlo Menotti’s The Telephone premiered.

One of the very first artists HUAC chewed up and spit out was the great screenwriter Alvah Bessie. Because of his 1947 HUAC appearance as an “unfriendly witness” his name was taken of the credits of his greatest film Ruthless. 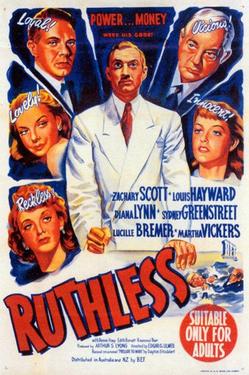 He was finally given official credit for the film’s screenplay a few years ago. Not that it mattered to hima anymore as he was long dead.

Back to February 18th.

There was an art show that day.

“The exhibition consisted of Gorky’s drawings. A review in the February 18, 1947 issue of The New York Times noted that “Color drawings by Arshile Gorky, at Julien Levy’s are rather slight and are non-objective. There is evidence of command of line but to what purpose is considerably less clear.” (MS323)
[Note: The exact dates for this exhibition are unclear. Gorky biographer Matthew Spender said that it opened on February 18 and ran “for little more than a week,” referring to it as Gorky’s “annual show at the Julien Levy Gallery.” (MS322) In the list of exhibitions at the gallery published in Julien Levy’s autobiography, the only exhibition fitting this description is “Gorky, Drawings” with the dates March 1 – March 8, 1947. (MA311) Yet the New York Times review was apparently published on February 18.]
Although the exhibition consisted solely of drawings, Gorky managed to finish about twenty-five paintings in the first ten months of 1947, according to Matthew Spender.
Matthew Spender [from From a High Place: A Life of Arshile Gorky]:
“During the first ten months of 1947, Gorky completed roughly twenty-five major paintings. In the eight months before this, he had hardly painted at all, and in the eight months following, he completed only half a dozen canvases… Some early versions of The Plow and the Song (1947) had been destroyed in the studio fire. From a High Place was originally conceived in 1944. All the works of this final period have a retrospective feel to them, just as the title From a High Place indicates detachment and retreat…”

And a train crash.

“Altoona, Pa . Feb 18-AP- Coroner DANIEL REPLOGLE of Altoona, said that “ at least 20 were killed” in the wreck of Pennsylvania railroad’s “Red Arrow”, Detroit to New York passenger train, 10 miles west of here early today.
The coroner said that 17 bodies had been taken out of the wreck, which occurred when the train jumped the track and sent the two engines, mail car, baggage car, coach and two sleepers plunging down the embankment, overturned the diner and two sleepers and derailed three other sleepers.

A Pennsylvania railroad spokesman estimated “ about 80 persons” were injured.

The wreck of the Detroit-New York sleeper occurred at 3:25 am. The scene was about two miles west of “Horseshoe Curve” known to thousands for its beautiful view down a mountain valley.

A railroad spokesman said two locomotives and 11 cars of the 14 car train were derailed, some rolling down an embankment.

The injured were rushed to hospitals at Altoona, where attendants became so busy they couldn’t count the casualties. Mercy and Altoona hospitals later reported they had a total of 85 casualties and more were arriving.

The accident disrupted all railroad telephone communications in the area, the spokesman said, increasing the difficulty of obtaining information and details.

The “Red Arrow” is one of the Pennsylvania’s crack passenger trains. It had eight sleepers, one diner, one coach and the rest baggage and mail cars.
TOM LYNAM, an Altoona photographer, said he saw three or four bodies lying around and injured passengers were moaning inside an overturned car.

“I shone my flashlight inside and saw arms and legs sticking up” he said. “Some railroad workers with acetylene torches were cutting the wreckage to release passengers who were pinned down. The injured were being carried away on stretchers.

“One woman was calling for her daughter, who was in a car that went down a 100-foot embankment.
It was a pretty weird sight and made me feel shaky. My two brothers, who drove from Altoona with me, became so nervous they could hardly hold still.

Witnesses told of a clergyman, identified as the REV. LEIBERMAN, of Canton, O., praying and calming passengers in the car at the bottom of the embankment.

The casualties were removed to Altoona by train.

The lines two eastbound tracks were open, but the westbound pair were blocked Traffic was rerouted.

LYNAM said the wreck occurred on a long slope leading to Cresson Mountain—-the highest and most picturesque of the Alleghenies. It’s altitude is 2,100 feet.

A railroad spokes man said this was the status of the train: plunged down the embankment–two engines, mail car, one passenger Baggabe [sic] car, a coach, two sleepers; overturned but remaining on embankment— diner, two sleepers; derailed but upright.— Three sleepers; still on rails—one sleeper, one coach one express car.

JOHN BAIR., Swarthmore, enroute to Gettysburg college, where he is a student, a passenger on the Jeffersonian, another Pennsy train, described the wreckage as “a big mess”.

Twenty one persons were killed instantly in the wreck and the 22nd victim, GEORGE C. BOWMAN, 47, Tyrone, a mail clerk, died last night.
BOWMAN was pinned in the wreckage for hours before rescue workers extricated him by cutting through the steel mail car with acetylene torches. Although badly injured, he wrote out a will on a sheet of soiled paper and handed it to one of his rescuers to witness.

“ I always wanted to make out a will,” he explained, “ but I never got around to it.”

Three of the four crew members in the two engines were killed. The lone survivor was MICHAEL BILLIG, 53, the engineer of the lead engine. He was injured critically.

Among the most seriously injured were two members of a troupe of midgets. SOVENIA RIDDLE, 17, Andover, N. J., one of the midgets, was given a blood transfusion which doctors said saved her life. ADELLA NOWALK, 27, Nanticoke, another midget, also was in critical condition.”

Outside of that it was year like any other year.

Dance (and sing) us out kids.

They sure are blue!