So glad they ran this today on TCM. Anything to take one’s mind off of today’s Harry Brocks.

See how it works? “The fuckin’ nigger made me a racist.”

That was back at the start of this rabid dog and insane pony show. Now we’ve come to the crunch.

Demonstrators outside the U.S. Capitol , angry over the proposed health care bill, shouted “nigger” Saturday at U.S. Rep. John Lewis , a Georgia congressman and civil rights icon who was nearly beaten to death during an Alabama march in the 1960s.
The protesters also shouted obscenities at other members of the Congressional Black Caucus , lawmakers said.
“They were shouting, sort of harassing,” Lewis said. “But, it’s okay, I’ve faced this before. It reminded me of the 60s. It was a lot of downright hate and anger and people being downright mean.”
Lewis said he was leaving the Cannon office building across from the Capitol when protesters shouted “Kill the bill, kill the bill,” Lewis said.
“I said ‘I’m for the bill, I support the bill, I’m voting for the bill’,” Lewis said.
A colleague who was accompanying Lewis said people in the crowd responded by saying “Kill the bill, then the n-word.”

“It surprised me that people are so mean and we can’t engage in a civil dialogue and debate,” Lewis said.
Rep. Emanuel Cleaver , D- Mo. , said he was a few yards behind Lewis and distinctly heard “nigger.”
“It was a chorus,” Cleaver said. “In a way, I feel sorry for those people who are doing this nasty stuff – they’re being whipped up. I decided I wouldn’t be angry with any of them.”
Protestors also used a slur as they confronted Rep. Barney Frank , D- Mass. , an openly gay member of Congress . A writer for Huffington Post said the crowd called Frank a “faggot.”
Frank told the Boston Globe that the incident happened as he was walking from the Longworth office building to the Rayburn office building, both a short distance from the Capitol. Frank said the crowd consisted of a couple of hundred of people and that they referred to him as ‘homo.’
“I’m disappointed with the unwillingness to be civil,” Frank told the Globe. “I was, I guess, surprised by the rancor. What it means is obviously the health care bill is proxy for a lot of other sentiments, some of which are perfectly reasonable, but some of which are not.”
“People out there today, on the whole, were really hateful,” Frank said. “The leaders of this movement have a responsibility to speak out more.”

I think they’ve spoken quite enough.

Thousands of demonstrators gathered outside the Capitol on Saturday as the House Democratic leadership worked to gather enough votes to enact a health care overhaul proposal that has become the centerpiece of President Barack Obama’s domestic agenda. Most were affiliated with so-called tea party organizations that originally sprang up during last summer’s protests of the health care proposals.
Heated debate has surrounded what role race plays in the motivations of the tea party demonstrators. During protests last summer, demonstrators displayed a poster depicting Obama as an African witch doctor complete with headdress, above the words “OBAMACARE coming to a clinic near you.” Former President Jimmy Carter asserted in September that racism was a major factor behind the hostility that Obama’s proposals had faced.
The claim brought angry rebuttals from Republicans.
On Saturday, Frank, however, said he was sorry Republican leaders didn’t do more to disown the protesters.
Some Republicans “think they are benefiting from this rancor,” he said.
House Majority Whip James Clyburn, D- S.C. , said Saturday’s ugliness underscored for him that the health care overhaul isn’t the only motivation for many protesters.
“I heard people saying things today I’ve not heard since March 15th, 1960 , when I was marching to try and get off the back of the bus,” Clyburn said. “This is incredible, shocking to me.”
He added, “A lot of us have said for a long time that none of this is about healthcare at all. It’s about extending a basic fundamental right to people who are less powerful.”

It’s not about that. It’s about late middle-aged (and older), middle-class white racists (the so-called “Greatest Generation”) who having woken one day to discover that a black man has been elected President of The United States cannot contain their rage.

As is perfectly obvious to anyone of reasonable intelligence and personable demeanor President Obama is the very embodiment of a “centerist.” He’s not about to move this country so much as a centimeter more leftward than Ronald Reagan (who he resembles politically in a considerable number of ways.) But the fact that he’s black has set “The Greatest Generation” into a fit of racist mass hysteria the likes of which hasn’t been seen since the world premiere of The Birth of a Nation revived the fortuens of a then-fading Ku Klux Klan. 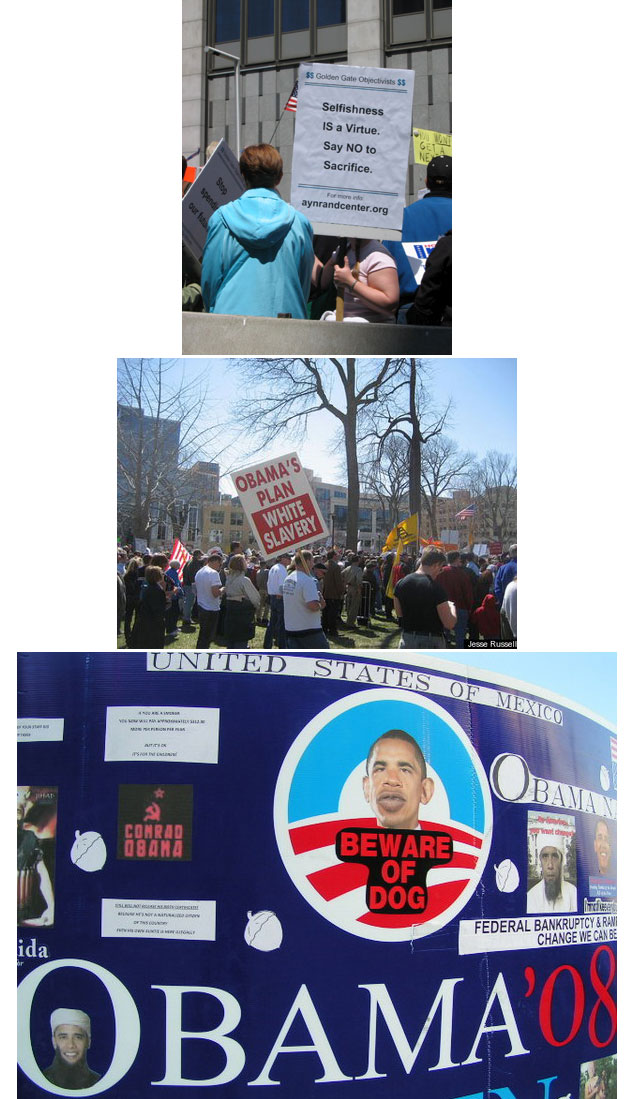 And so we get today’s Billie Dawns

As Ernest Hemingway says at the close of The Sun Also Rises — “Isn’t it pretty to think so.”

Ryuichi Sakamoto’s ex-wife will sing us out.