At the moment the facts are not in dispute. But there will doubtless be additions and “corrections.”

“The pictures on the Rentboy.com profile show a shirtless young man with delicate features, guileless eyes, and sun-kissed, hairless skin. The profile touts his “smooth, sweet, tight ass” and “perfectly built 8 inch cock (uncut)” and explains he is “sensual,” “wild,” and “up for anything” — as long you ask first. And as long as you pay. “ 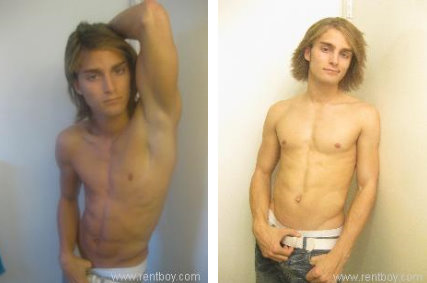 “On April 13, the “rent boy” (whom we’ll call Lucien) arrived at Miami International Airport on Iberian Airlines Flight 6123, after a ten-day, fully subsidized trip to Europe. He was soon followed out of customs by an old man with an atavistic mustache and a desperate blond comb-over, pushing an overburdened baggage cart.”

“That man was George Alan Rekers, of North Miami — the callboy’s client and, as it happens, one of America’s most prominent anti-gay activists. Rekers, a Baptist minister who is a leading scholar for the Christian right, left the terminal with his gay escort, looking a bit discomfited when a picture of the two was snapped with a hot-pink digital camera.”

“Reached by New Times before a trip to Bermuda, Rekers said he learned Lucien was a prostitute only midway through their vacation. “I had surgery,” Rekers said, “and I can’t lift luggage. That’s why I hired him.” (Though medical problems didn’t stop him from pushing the tottering baggage cart through MIA.)”

And what was “Lucien,” after all. but baggage ?

“Yet Rekers wouldn’t deny he met his slender, blond escort at Rentboy.com — which features homepage images of men in bondage and grainy videos of crotch-rubbing twinks — and Lucien confirmed it.”

Which can all be found (and more!) RIGHT HERE!

At the small western Miami townhome he shares with a roommate, a nervous Lucien expressed surprise when we told him that Rekers denied knowing about his line of work from the beginning. “He should’ve been able to tell you that,” he said, fidgeting and fixing his eyes on his knees. “But that’s up to him.”

“For decades, George Alan Rekers has been a general in the culture wars, though his work has often been behind the scenes. In 1983, he and James Dobson, America’s best-known homophobe, formed the Family Research Council, a D.C.-based, rabidly Christian, and vehemently anti-gay lobbying group that has become a standard-bearer of the nation’s extreme right wing. Its annual Values Summit is considered a litmus test for Republican presidential hopefuls, and Sean Hannity and Ann Coulter have spoken there. (The Family Research Council would not comment about Rekers’s Euro-trip.)
He has also influenced American politics, serving in advisory roles with Congress, the White House, and the Department of Health and Human Services and testifying as a state’s witness in favor of Florida’s gay adoption ban. A former research fellow at Harvard University and a distinguished professor of neuropsychiatry at the University of South Carolina, Rekers has published papers and books by the hundreds, with titles like Who Am I? Lord and Growing Up Straight: What Families Should Know About Homosexuality.

Here’s some of his handiwork: “Review Of Research On Homosexual Parenting, Adoption, And Foster Parenting” As you can well imagine, he’s against it. But that doesn’t get in the way of his own special. . . .parenting skills.

“While he keeps a low public profile, his fingerprints are on almost every anti-gay effort to demean and dehumanize LGBT people,” says Wayne Besen, a gay rights advocate in New York City and the executive director of Truth Wins Out, which investigates the anti-gay movement. “His work is ubiquitously cited by lobby groups that work to deny equality to LGBT Americans. Rekers has caused a great deal of harm to gay and lesbian individuals.”
Rekers is a board member of the National Association for Research & Therapy of Homosexuality (NARTH), an organization that systematically attempts to turn gay people straight. And the Huffington Post recently singled out Rekers as a member of the American College of Pediatricians — an official-sounding outfit in Gainesville that purveys lurid, youth-directed literature accusing gays of en masse coprophilia. (In an email, the college’s Lisa Hawkins wrote, “ACPeds feels privileged to have a scholar of Dr. Rekers’ stature affiliated with our organization. I am sure you will find Prof. Rekers to be an immaculate clinician/scholar, and a warm human being.”)

Or at the very least room temperature.

“Rekers lectures worldwide, from Europe to the Middle East, on teen sexuality. Yet during his ten-day sojourn with Lucien to London and Madrid, he had no lectures scheduled. Both men deny having sex on the trip, and emails exchanged between the two before their jaunt are cautiously worded.”

If that’s their story they should stick to it.

“I’d like to propose another trip to Rome, Italy, for a week or more,” Rekers wrote in an email dated March 21 obtained by New Times. “This is so exciting to have a nice Travel Assistant and traveling companion! Wow! I’m so glad I met you.”

“I called and talked to the reservation guy in London and reserved a room with two twin beds,” Rekers wrote on March 26.

“In his interview with New Times, Lucien didn’t want to impugn his client, but he made it clear they met through Rentboy.com, which is the only website on which he advertises his services. Neither Google nor any other search engine picks up individual Rentboy.com profiles, any more than they pick up individual profiles on eHarmony or Match.com. You cannot just happen upon one.”

“To arrive at Lucien’s site, Rekers must have accepted Rentboy.com’s terms of use, thereby acknowledging he was not offended by graphic sexual material. He then would have been transported to a front page covered with images of naked, tumescent men busily sodomizing each other.”

I’m sure he overlooked that, beinf so intent on finding a luggage handler.

“Then Rekers must have performed a search. Did he want a “rentboy,” a “sugar daddy,” or a “masseur”? In what country? And what city? If Rekers searched for a rent boy in Miami, he would have found approximately 80 likely candidates. He must have scrolled down the first page, past the shirtless bears and desperate ex-models, and on to page 2. There, at last, was Lucien.”

As a favor to Rekers, Lucien recently removed any wanton sexual descriptors from his Rentboy profile. Though he does admit Rekers “likes younger guys to hang out with,”

“Lucien is protective of his erstwhile client. He describes Rekers primarily as a family man — one whose passion for oppressing homosexuals is dwarfed by his desire to help children. “You don’t understand how much this guy honestly cares about taking care of kids,” he says.”

Of course we do.

“Indeed, much of Rekers’s activism over the past three decades — beginning with his 1983 book, Shaping Your Child’s Sexual Identity — has been devoted to improving children’s lives by educating them, protecting them from their own budding sexualities, and keeping them safe from gay adoptions — as he did by testifying as an expert witness in favor of gay adoption bans in both Arkansas and Florida.”

“Well, it’s a good thing Rekers isn’t gay himself. Lucien tells us that Rekers frequently takes in foster children and that four years ago he adopted a 16-year-old boy. We found the boy, who is now Lucien’s age, on Facebook. He declined to be interviewed.”

“the paper makes no effort to explain how they learned of the trip or how they learned about “Lucien,” the Rentboy. They don’t even bother to say, “A source tipped us off to the story.” So, it’s not an article or an exposé so much as it is a whimsical tale that reads like something out of a gay gossip rag. (Wait, is New Times a gay gossip rag? Who knows.)”

Well I do, and to quote Cher (in Tea With Mussolini) “Alas No.” It’s part of a syndicate whose holdings include The Village Voice (home of Michael Musto) and The L.A. Weekly (to which I’m a frequent contributor)

“The point is, if you’re going to take down one of the biggest pieces of shit from the religious right, do a better job.”

The point is the “Mainstream Media” Has a far lower bar for what constitutes “a better job” thanks to its insistence on unnamed sources ( a practice I’ve complained about at length. )

Surely there is more to this masquerade — both in the way of attribution and baggage.
And speaking of the latter Francis Ford Coppola (aided and abetted by Joe Dallesandro, Richard Gere, Diane Lane, Gregory Hines, Lonette McKee and the ensemble) will smash us out.