From the sublime to the ridiculous.

“David Weigel, who was hired by The Washington Post to blog about conservatives, resigned Friday after leaked online messages showed him disparaging some Republicans and commentators in highly personal terms.”

IOW, He was caught telling the Truth.

“Weigel, whose tenure lasted three months, apologized Thursday for writing on a private e-mail exchange that Matt Drudge should “handle his emotional problems more responsibly and set himself on fire.” He also mocked Ron Paul, the Texas congressman, by referring to the “Paultard Tea Party.”

Right on both counts.

“Dave did excellent work for us,” Executive Editor Marcus Brauchli said. But, he said, “we can’t have any tolerance for the perception that people are conflicted or bring a bias to their work. . . . There’s abundant room on our Web site for a wide range of viewpoints, and we should be transparent about everybody’s viewpoint.”

Weigel declined to comment except to say that none of the e-mails was sent after he joined The Post. Earlier, he told the Caller: “I’ve always been of the belief that you could have opinions and could report anyway. . . . People aren’t usually asked to stand or fall on everything they’ve said in private.”

Tucker Carlson, the conservative pundit who edits the Caller, said: “I’ve always liked Dave Weigel and I think he’s talented,” but that the messages “struck me as the kind of thing you might like to know if you’re reading his stories.”

A wonder Tucker didn’t beat Dave up (he’s so BUTCH!)

The Post has hired such left-leaning bloggers as Klein — also a contributor to MSNBC and Newsweek — who came from American Prospect. Greg Sargent was hired from Talking Points Memo by The Post Co.’s WhoRunsGov site, and now also writes for the newspaper’s opinion pages. This new breed is expected to report for their online columns while also offering a point of view, and Weigel’s “Right Now” blog was meant to be in that mold.

“Carlson questioned the rules for Post bloggers, saying, “The people who write there, are they reporters? Are they op-ed writers? I don’t get it, and I don’t think readers get it.”
Jim Geraghty, a columnist for National Review Online and a friendly acquaintance of Weigel, said The Post “erred by giving him the conservative beat not too long after launching Ezra Klein with a liberal blog. I think conservatives expected Dave would be the writing the right-of-center equivalent” of Klein’s column. “There was definitely a perception that his blog was designed to make conservatives look bad.”

Truth has a Liberal Bias.

Brauchli said he doesn’t “believe it’s necessary for somebody to be of a certain ideology to write about people who are of that ideology. We do think it’s imperative we bring independence to that coverage.”

Then hire Lectroids from Planet 10.

Asked about Weigel’s strong views about some conservatives, Brauchli said: “We don’t have the resources or ability to do Supreme Court justice-type investigations into people’s backgrounds. We will have to be more careful in the future.”

EVERYONE has to be more careful these days.

“Klein wrote Friday that he is abolishing Journolist immediately because its archives have “become a weapon.” He said he is “heartbroken” over the resignation of Weigel, calling him “an extraordinary reporter and a dear friend.”
Weigel, who was hired from the Washington Independent, had stirred controversy in May when he referred to “anti-gay marriage bigots” on his Twitter page.
This is not the first time that washingtonpost.com has had problems covering the right. In 2006, conservative blogger Ben Domenech resigned three days after his debut, following a flurry of plagiarism allegations involving his previous work. “

Maybe Ben should be rehired.

And now Pravda’s ombudsman weighs in.

“Post blogger Dave Weigel, who wrote about the conservative movement, resigned amid controversy today following disclosure of disparaging e-mails he’d written about some of the very people he was hired to cover.
Weigel bears responsibility for sarcastic and scornful comments he made in e-mails leaked from a supposedly private listserv called “Journolist,” started in 2007 by fellow Post blogger and friend Ezra Klein. Weigel’s e-mails showed strikingly poor judgment and revealed a bias that only underscored existing complaints from conservatives that he couldn’t impartially cover them.
But his departure also raises questions about whether The Post has adequately defined the role of bloggers like Weigel. Are they neutral reporters or ideologues?”

Why ask questions whose answers you already know?

“And, given the disdainful comments in his e-mails, there is the separate question of whether he was miscast from the outset when he was hired earlier this year.
Raju Narisetti, the managing editor who oversees The Post’s Web site, said Weigel called him last night and offered to resign after Fishbowl D.C. initially revealed some damaging e-mails. Narisetti said Weigel alerted him that another Web site, the conservative Daily Caller, planned to disclose more e-mails today.”

Casting is always a problem — especially with all those understudies waiting in the wings.

“This morning, after reading them, I accepted his resignation,” Narisetti said. Contacted by e-mail, Weigel replied: “I no longer work for the Post.”

The Elvis Impersonator has left the building.

The e-mails made negative comments about Pat Buchanan, Newt Gingrich, Ron Paul, and conservative radio commentator Rush Limbaugh, among others. One suggested it “would be a vastly better world” if Webmeister Matt Drudge “decided to handle his emotional problems more responsibly, and set himself on fire.”

Weigel apologized online yesterday, but the damage was too severe to save his job.

IOW you’ve REALLY got to know how to KISS ASS. 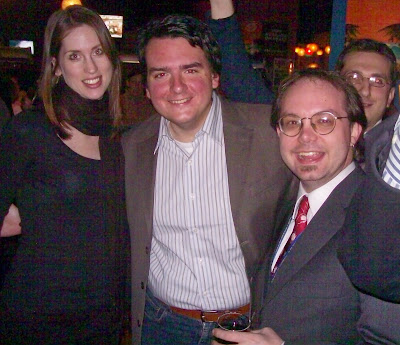 He said that when Weigel was hired, he was vetted in the same way that other prospective Post journalists are screened. He interviewed with a variety of top editors, his writings were reviewed and his references were checked, Narisetti said.

“But we’re living in an era when maybe we need to add a level” of inquiry, he said. “It may be in our interests to ask potential reporters: ‘In private… have you expressed any opinions that would make it difficult for you to do your job.”

Then run a Voight-Kampff on them.

“Weigel’s exit, and the events that prompted it, have further damaged The Post among conservatives who believe it is not properly attuned to their ideology or activities. Ironically, Weigel was hired to address precisely those concerns.”

With bloggers such as Weigel, “I think The Post needs to decide what it wants to be online,” said Dan Gainor, a vice president at the conservative Media Research Center. “Does it want to be opinion? Or, does it want to be news? The problem here was that it was never clear.”

“If it’s going to be opinion, it ought to have somebody on the conservative side — something Dave Weigel never was,” he said.

A pod would have worked.

If The Post wants to assign a “good neutral reporter” to cover conservatives, “we’d be thrilled,” said Gainor. But quickly added, Weigel “wasn’t one. He looked at the conservative movement as if he was visiting a zoo. We’re more than that.”

Gainor raises valid points. Klein’s blog posts clearly pass through a liberal prism. For that reason, liberals have a comfort level with what he writes, and conservatives know where he’s coming from, even if they disagree. In contrast, Weigel’s blog seemed to confuse many conservatives who contacted me. Was he supposed to be a neutral reporter, some wondered? Others complained that he was a liberal trying to write about conservatives he disdained.

“We will look for someone to replace Dave,” Narisetti said.

“Instead of just a replacement, The Post might consider two: one conservative with a Klein-like ideological bent, and another who can cover the conservative movement in the role of a truly neutral reporter. “

“In the meantime, Post managers would be wise to remind all staffers that personal opinions, expressed privately on listservs or through social media, can prove damaging if made public.”

“Klein addressed that danger this afternoon in a thoughtful blog post explaining why he is closing down Journolist, and why he is saddened that leaks from the listserv led to the resignation of Weigel, a “dear friend.” Klein wrote:

There’s a lot of faux-intimacy on the Web. Readers like that intimacy, or at least some of them do. But it’s dangerous. A newspaper column is public, and writers treat it as such. So too is a blog. But Twitter? It’s public, but it feels, somehow, looser, safer. Facebook is less public than Twitter, and feels even more intimate. A private e-mail list is not public, but it is electronically archived text, and it is protected only by a password field and the good will of the members. It’s easy to talk as if it’s private without considering the possibility, unlikely as it is, that it will one day become public.
Alas, it took only one listserv participant to bundle up Weigel’s archived comments and start leaking them outside the group. The result is that Weigel lost his job. But the bigger loss is The Post’s standing among conservatives.”

Not to mention Fire Marshalls.

Sing us out Arthur.