Simple, isn’t it. Noted children’s book writer/illustrator Maurice Sendak asked why he liked children so much replied “They’re not racist and they don’t lie.”

Of course to the Heterofascists Maurice Sendak is a grave threat. Why? because he’s gay.

And so is THIS Dude. 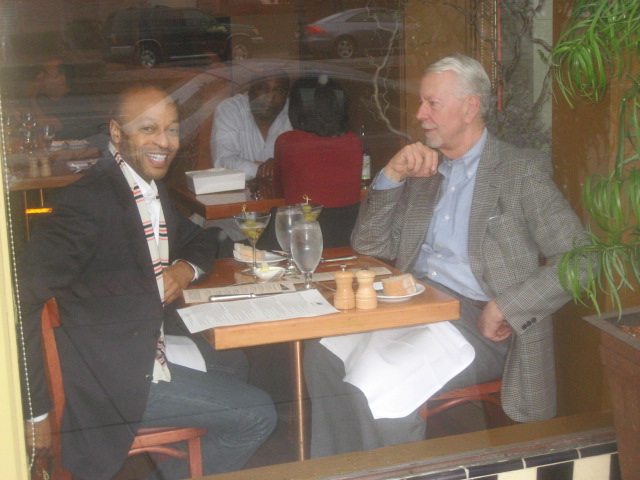 Do Tell Michelle! Or rather, Michael.

“SAN FRANCISCO — Chief U.S. Judge Vaughn Walker has always been characterized as a conservative with libertarian leanings. But after he struck down California’s voter-approved gay marriage ban this week, he was accused by some of being something else entirely: a gay activist.
Rumors have circulated for months that Walker is gay, fueled by the blogosphere and a San Francisco Chronicle column that stated his sexual orientation was an “open secret” in legal and gay activism circles. “

“Walker himself hasn’t addressed the speculation, and he did not respond to a request for comment by The Associated Press on Thursday. Lawyers in the case, including those defending the ban, say the judge’s sexuality – gay or straight – was not an issue at trial and will not be a factor on appeal.”

Indeed. If the defense wanted Judge Walker to “recuse himself” they had their chance — and didn’t take it.

“But that hasn’t stopped a public debate that exploded in the wake of the 66-year-old jurist’s Wednesday decision. Most of the criticism has come from opponents of same-sex marriage.
“Here we have an openly gay federal judge, according to the San Francisco Chronicle, substituting his views for those of the American people and of our Founding Fathers who, I promise you, would be shocked by courts that imagine they have the right to put gay marriage in our Constitution,” said Maggie Gallagher, chairwoman of The National Organization for Marriage, a group that helped fund the ban, known as Proposition 8.
In response, the Gay and Lesbian Victory Fund, a political action committee for gay candidates, launched an online petition accusing Gallagher’s group of “gay-baiting.”
But the debate raises the question: Why is sexuality different from other personal characteristics judges posses? Can a female judge rule on abortion issues? A black judge on civil rights?”

And how about all those Roman Catholics on the Supreme Court? Should they “recuse themselves” when the case reaches their docket in that they belong to a religion that while wildly supportive of wholesale child molestation abhors Teh Ghey.

And what an ruling it was! (Not an “Opinion” asshole) replete with 80 separate “Findings of Fact” — something any court wanting toreverse Walker will be obliged to take apart piece by piece.

“Gerard Bradley, a law professor at the University of Notre Dame, published a Fox News column in the hours before Walker filed his opinion faulting the media for not forcing Walker to address his sexual orientation.
And Byran Fischer, issues director for the American Family Association, urged the group’s members to contact their congressional representatives about launching impeachment proceedings because Walker had not recused himself from a case in which “his own personal sexual proclivities utterly compromised his ability to make an impartial ruling.”
William G. Ross, an expert on judicial ethics and law professor at Samford University in Alabama, said that a judge’s sexual orientation has no more relevance to his or her ability to rule fairly on a case involving gay marriage than it would for a deeply religious judge or a judge who had been divorced multiple times.”

A lovely bitch-slap to Newt, no?

“Under the logic of the people challenging the judge’s fitness to rule on a case involving gay rights because he or she was gay, one would have to find a eunuch to serve on the case, because one could just as easily argue that a heterosexual judge couldn’t rule on it either,” Ross said.
Months before Walker struck down Proposition 8 as an unconstitutional violation of gay Americans’ civil rights, members of the team defending the ban in court had complained about what they perceived as judicial bias.
Over their vigorous objections, Walker pushed to have the proceedings televised live, a plan the U.S. Supreme Court quashed at the last minute. Then, he refused to excuse as a witness a Proposition 8 supporter who had compared gays to child molesters during the 2008 campaign. Lawyers for the two same-sex couples who sued to invalidate the ban had called him as a witness to try to prove the measure was fueled by anti-gay prejudice.”

And here he be!

“Now, what I want is, Facts. Teach these boys and girls nothing but Facts. Facts alone are wanted in life. Plant nothing else, and root out everything else. You can only form the minds of reasoning animals upon Facts: nothing else will ever be of any service to them. This is the principle on which I bring up my own children, and this is the principle on which I bring up these children. Stick to Facts, sir!” The scene was a plain, bare, monotonous vault of a schoolroom, and the speaker’s square forefinger emphasized his observations by underscoring every sentence with a line on the schoolmaster’s sleeve. The emphasis was helped by the speaker’s square wall of a forehead, which had his eyebrows for its base, while his eyes found commodious cellarage in two dark caves, overshadowed by the wall. The emphasis was helped by the speaker’s mouth, which was wide, thin, and hard set. The emphasis was helped by the speaker’s voice, which was inflexible, dry, and dictatorial. The emphasis was helped by the speaker’s hair, which bristled on the skirts of his bald head, a plantation of firs to keep the wind from its shining surface, all covered with knobs, like the crust of a plum pie, as if the head had scarcely ware-house-room for the hard facts stored inside. The speaker’s obstinate carriage, square coat, square legs, square shoulders,-nay, his very neckcloth, trained to take him by the throat with an unaccommodat-ing grasp, like a stubborn fact, as it was,-all helped the emphasis. “In this life, we want nothing but Facts, sir; nothing but Facts!” The speaker, and the schoolmaster, and the third grown person present, all backed a little, and swept with their eyes the inclined plane of little vessels then and there arranged in order, ready to have imperial gallons of facts poured into them until they were full to the brim.”

And FACTS are precisely what Boies and Olson had on their side.

The defense? Not so much.

“Nevertheless, the defense does not plan to raise the specter of the judge’s sexual orientation as they appeal his ruling to the 9th U.S. Circuit Court of Appeals, said Jim Campbell, a lawyer with the defense team.
“The bottom line is this case, from our perspective, is and always will be about the law and not about the judge who decides it,” Campbell said. “It’s just something that collectively as a legal team we have decided and going up, that’s what this case is. The appellate courts are going to focus on the law.”
Walker has ruled in at least two other cases involving gay rights issues during his two decades as a judge. In 1999, he rejected arguments from the parents of a San Leandro boy who claimed their religious rights were violated by pro-gay comments their son’s teacher had made in the classroom.
In the other case, he dismissed a free speech claim by two Oakland city employees whose managers had confiscated a bulletin board flier for a religious group that promoted “natural family, marriage and family values.” The city had “significant interests in restricting discriminatory speech about homosexuals,” Walker wrote in his 2005 ruling.
Until this week, though, Walker had come under more criticism for representing the U.S. Olympic Committee in a lawsuit against a gay ex-Olympian who had created the so-called Gay Olympics. Walker won, forcing the Gay Olympics to become the Gay Games. He also aggressively pursued legal fees by attaching a $97,000 lien to the home of the organization’s founder while he was dying of AIDS.
Gay activists cried foul, and his appointment to a federal judgeship was delayed for two years in the waning days of Ronald Reagan’s presidency.
Civil rights groups also opposed Walker’s nomination because of his 15-year membership in the Olympic Club, an all-male athletic club that had only recently admitted its first black members. California’s senior senator at the time, Democrat Alan Cranston, used the club issue to question Walker’s fitness for the bench.”

Well to judge from Petrelis’ pic he’s certainly must have changed his mind about blacks. (Hubba-Hubba!)

“Observers usually describe him as a maverick who delights in keeping people guessing. They still are.
On the day of closing arguments in the gay marriage ban case, Walker said it was appropriate that the case was wrapping up in June.
“June, after all, is the month for … ” He let his deep voice trail off, and smiled at the predominantly gay courtroom. Many froze, wondering if he would refer to the month in which San Francisco celebrates gay pride like Mardi Gras. Would that be a nod to rumors he was gay?
Walker waited a beat longer, savoring the moment. The he settled the suspense.
“… weddings,” he said. “

Oh stop with the “rumors” Lisa. It’s 2010 It’s Neil Patrick Harris’ world. We just live in it.
And that’s why we’re going to get the last laugh, Maggie.

Take it away Spike!