Well it looks like Meg Whitman has something a lot more serious than an “illegal alien” housekeeper to worry about.

“As a student at Princeton University, the son of California gubernatorial candidate Meg Whitman—one of the school’s most celebrated donors—was accused of sexually assaulting a classmate. This is the story of the explosive accusation and its quiet aftermath
Griffith Rutherford Harsh V was never arrested or charged with a crime in connection with the incident. Princeton dealt with it quietly and internally, ultimately allowing Harsh to continue his education. He graduated with the class of 2009, three years after his rape accusation—and two years after the inauguration of Whitman College, the residential living complex his billionaire mother donated $30 million to help build. The donation was announced in 2002, the year before Griff matriculated.”

Isn’t “Harsh” a neat name for a rapist? Isn’t it neater still that if you’ve got the money you can provide the hush money through a “donation”?

“On a spring night in 2006, Griff—then a sophomore—went partying on the Street, a boozy row of private undergraduate dining clubs. As he would later tell a panel of university disciplinarians, he ran into a classmate and went home with her. They had sex. She awoke the next morning with a black eye, bruised face and, she told friends, no memories from the previous night. According to multiple sources—one of whom was a dormitory adviser at the time—the girl told her friends Griff Harsh had raped her.
A friend who spent time with her the following morning spoke to us under the condition of anonymity: “She woke up with him on top of her, and he was like, ‘You need the morning-after pill.’ And she was like, ‘Why, what happened?’ She didn’t remember having sex, she didn’t remember consenting, she didn’t remember any of it.”

“She had clearly hurt herself badly. Or been hurt badly.”
The girl consulted her friends, some of whom worried about the “social repercussions” of accusing such a high-profile student of rape. She was “terrified,” according to her friend. “She didn’t want to press charges because it’s Meg Whitman’s son. She didn’t want to go through that. She didn’t go to the police. She didn’t get a rape kit.”
But she did go to the campus health clinic the day after the alleged assault. Shortly thereafter, Princeton launched an internal investigation.”

“During the summer of 2006, Griff, his accuser, and a handful of other witnesses testified before Princeton University’s Committee on Discipline, a panel of a dozen “students, faculty members, and administrators” tasked with adjudicating “non-academic misconduct.” A source provided us the “closing statement” Griff presented to the panel: “I am deeply saddened and upset that [redacted] finds herself in this situation where she cannot remember what occurred between us that night,” he said. He said he thought she had been sober enough to consent. He attributed her injuries to an accidental fall.”

He must have tripped her by accident.

“In his statement, Griff notes “two sexual encounters prior” to the night in question as evidence that he thought the encounter was consensual. The friend we spoke to didn’t know about the previous encounters, but noted, “How somebody would think it was OK to sleep with this girl, who is bleeding from her face, is beyond me.” “

Well it’s beyond most of us dear. But we’re not Princeton — or Meg Whitman.

“We are told the disciplinary panel, which treats its matters as confidential, concluded that it did not have enough evidence to discipline Griff Harsh. He and his classmate went back to Princeton the next year. Both eventually graduated, though Griff required a fifth year to complete his studies after taking a year-long leave of absence.”

And he’s stupid too.

“We called Griff, who refused to comment on the case and hung up the phone. Meg Whitman’s campaign didn’t respond to several messages, and a spokesperson for Princeton University, Emily R. Aronson, said she was unable to comment about this specific case due to federal confidentiality laws, but offered a statement about the school’s official policy in such cases:
The University informs the reporting student of his or her right to pursue separate criminal action, and provides the reporting student with information enabling him or her to do so. Each case is individual, and we recognize that the decision of veporting a sexual assault is ultimately the student’s. The priority is to make sure students know what resources are available to help them, and that they make the decision that is right for them.
We also contacted the woman who accused Griff of rape. She did not respond to our inquiries.”

I suspect she recalled Robert Chambers. 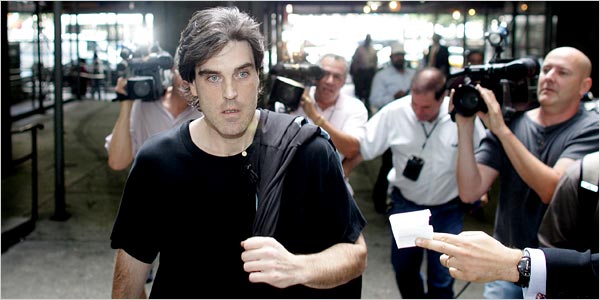 and felt she was lucky she didn’t end up like Jennifer Levine.

“The rape accusation wasn’t Griff’s first brush with trouble, nor was it his last. One year before that fateful night in 2006, a 20-year-old Griff was arrested in Princeton for buying alcohol with a fake I.D. He pleaded guilty to underage alcohol possession. Charges of lying about his age to buy alcohol and possessing a “false government document” were dismissed.”

Wonder what Meg paid to hush up that one. Quite minor in comparasion to his subsequent crimes, but as always money talks.
And prevents talk from going any further.

Here are the relevant complaints:
“I think what happened is wrong,” said the friend who tended to the victim the morning after. “I think the university handled it wrong. I would never fault [redacted] because I understand—to press charges against a billionaire son is daunting. She just wants to forget that it happened and move on with her life, and if he wants to say they slept together before, he gets to.”

Translation: “She doesn’t want to get murdered.”

The Late and much missed Dorothy Dean used keep track of the going rate for contracting a “hit.” Does Meg “keep up” wiht this, uh service charge ? Bet she does.

“Griff’s legal troubles continued even after the rape accusation. Shortly after the Princeton rape incident, Griff was back home in California when he was arrested for breaking a woman’s ankle during a brawl at a bar. He was released after his mother posted $25,000 in bail and the charges were eventually dismissed.”

“A political newcomer, Meg Whitman credits her late political awakening (she didn’t register to vote until seven years ago) to her busy schedule: She was “focused on raising a family.” And yet her two adult sons have been absent from her campaign, perhaps because both boys have faced their share of scandals. (Most recently, Griff’s younger brother Will got into an altercation with a Princeton professor.)
Since Meg lacks a political track record, many have looked to her tenure as CEO of Ebay to understand how she handles power. (Not always nonviolently, it seems: an eBay employee once accused Whitman of shoving her in a meeting.) The decision by Princeton officials to permit the son of one of its most prominent donors to remain in school following such serious allegations may raise questions about her influence at Princeton University, too.”

Oh poor Meg. What’s a multi-zillionaire mother to do?

“Today in news about California governor candidate Meg Whitman’s famously awful offspring: younger son Will Harsh throws a tantrum and challenges a Princeton professor to a fight over a rugby field that, the young heir thought, belonged to him.
Will is a rising senior at Princeton and president of Princeton’s rugby team, which practices on West Windsor Field, in spitting distance of Whitman College, the residential living complex his mother helped build with a gift of $30 million. (If that isn’t the recipe for a silver spoon horror story, I don’t know what is.) Three weeks ago, Princeton’s graduate student softball league was playing a deeply nerdy game on West Windsor, pitting the computer science department’s team (“The Cache Hitters”) against the plasma physics lab’s team (“The Tokabats”). Will stormed the field mid-game and made an announcement: Only rugby players were allowed on this field, he said, and if the nerds didn’t leave, he’d call the cops. When they refused, Will started taking their stuff and throwing it over a fence, schoolyard bully style. Jeff Terrace, captain of the Cache Hitters, wrote about the episode on his blog. (Emphasis mine.)
I had the pleasure of running into [Will Harsh] yesterday. I play in the summer softball league for graduate students, faculty, and professors at Princeton University. During our softball game yesterday, the president of the Princeton undergraduate rugby team, William W. Harsh, came onto our field and told us that we were not allowed to play on the rugby fields. After explaining to him that we were an official university-sanctioned league and that we had permission to use the fields, he insisted that we had to leave. We told him we were in the middle of a game and were not leaving.
He then called public safety. While waiting for public safety, he came onto the field and started intentionally interfering with the game. He picked up third base and threw it over the fence. He then walked over to second and picked it up and held it. My advisor, a professor, tried to take the base back and Will dared him to tackle him.
Once public safety arrived (campus police), a lieutenant confirmed that we had permission to use the fields. Once again, the Whitman family confirmed as a classy group of individuals.”

Indeed. Much classier than the Sopranos.

“Though the softball teams had permission to use the field, Jeff Terrace told us by email that public safety mistakenly sided with the young heir at first, forcing the softball teams to spend “15 minutes moving all of our stuff to another field, so we didn’t move back” when the issue was later resolved.
Will Harsh did not respond to our request for comment. As always, we invite any member of the Harsh-Whitman family to write in and tell us whether they’re really as spoiled and bullying as everyone says they are.”

Oh we know precisely the type of thug Harsh is.

Though he thinks of himself as Dickie Greenleaf

Now where did I put that oar?

Sing us out, Matt