It’s screamingly obvious that it’s well nigh impossible to keep up with a story moving as fast as this one. But suffice to say that just as in Tunisia and other “trouble spots” throughout the world High Capitalism’s Chickens have come home to roost. How — indeed whether — this will end is impossible to say at this point. But for the nonce we might do well to reflect on the role Egypt has played in our collective imagination. 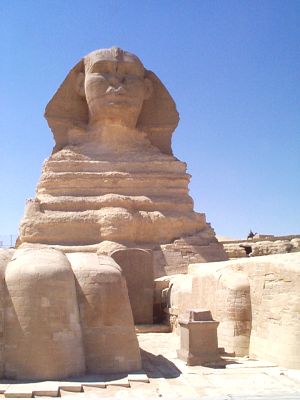 And as you can well imagine it’s quite a significant one.

To that end I think it’s best to start with the film that Gore Vidal says so impressed him as a child.

Needless to say it produced many sequels

None as interesting as this Egyptian take on entombment.

Has everything, doesn’t it? Except for Joan Collins of course.

Joan, as you may know, was first choice for a little potboiler 20th-Century Fox had in mind to boost it’s then-fading fortunes in the mid-1960’s. However someone else became available, and the rest is Hollywood History.

Of couse there’a also Egyptian film history, which largely centers around THIS dude.

“Youssef Chahine (Arabic: يوسف شاهين‎) (January 25, 1926 in Alexandria, Egypt –July 27, 2008 in Cairo, Egypt) was an Egyptian film director active in the Egyptian film industry since 1950. He was credited with launching the career of actor Omar Sharif. A critically acclaimed director frequently seen in film festivals during decades, Chahine also had his reach to wider international filmgoers’ audiences as one of the co-directors of 11’9″01 September 11”

“Chahine was born on Jan. 25, 1926 in Alexandria, Egypt to a Lebanese Catholic father, from Zahlé in east Lebanon, and a Lebanese Roman Catholic mother. Although born a Christian, Youssef Chahine was not a believer in organized religion and it was stated that, if asked of his religion, he would reply: Egyptian.
Fascinated by the performing arts from an early age, young Chahine began to create shows at home for his family. Chahine began his education at a Frères’ school Collège Saint Marc. Growing up, he attended Alexandria’s elite Victoria College. In 1946, Chahine convinced his parents to let him travel to Hollywood to study acting, where he attended the Pasadena Playhouse outside of Los Angeles, California.
After returning to Egypt, he turned his attention to directing. Cinematographer Alvise Orfanelli helped Chahine into the film business. Chahine directed his first feature film in 1950, Baba Amin (Daddy Amin) at the age of 23, two years before the revolution of 1952 that saw the overthrow of the monarchy and the rise of the charismatic leader Gamal Abdel Nasser. One year later, with Nile Boy (1951) he was first invited to the Cannes Film Festival. Sira’ fi-l-Wadi (The Blazing Sun, 1954) introduced Omar Sharif to the cinematic screen. In 1970 he was awarded a Golden Tanit at the Carthage Film Festival for al-Ikhtiyar (The Choice). With The Sparrow (1973), in which he showed his political opinions after the Six Day War with Israel, he directed the first Egypt-Algeria co-production.
He won the Silver Bear – Special Jury Priz at the 29th Berlin International Film Festival for Alexandria… Why? (1978),the first installment in what would prove to be an autobiographic quartet, completed with An Egyptian Story (1982), Alexandria, Again and Forever (1990),” 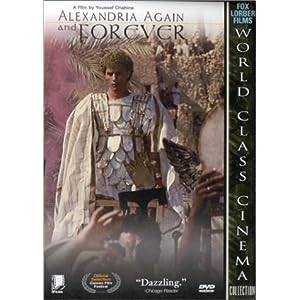 and Alexandria…New York (2004). The producer Humbert Balsan went to Cannes in 2004 with Alexandria… New York, his ninth film with the Egyptian director since 1985’s Adieu, Bonaparte. “In one of his films The Sixth Day اليوم السادس, an adaptation of a novel written in French by Lebanese writer André Chedid, the famous Egyptian singer Dalida was the protagonist in the role of a poor Egyptian woman.”

“About his work, Chahine has said, “I make my films first for myself. Then for my family. Then for Alexandria. Then for Egypt,” Chahine once famously said. “If the Arab world likes them, ahlan wa sahlan (welcome). If the foreign audience likes them, they are doubly welcome.”
Chahine frequently included gay or bisexual themes in his work. Alexandria…Why? tells the story of two young men—one Egyptian, the other European—who fall in love during World War II. Yehia’s cousin is gay and ‘buys’ drunken British soldiers. Jewish friends are forced to leave and decide to settle in Palestine. In An Egyptian Story (1982) Yehia is a flim-maker, going to London (as Chahine had earlier) for open-heart surgery. He has a brief affair with a taxi driver.”

IOW he’s the cinematic heir to THIS dude.

“The Sparrow attacks Egyptian corruption and blamed it for the defeat in the Six Day War. Cairo Station, albeit a classic of Egyptian cinema, also shocked viewers both by the sympathy with which a “fallen woman” is depicted and by the violence with which another is killed. During the several following years Chahine found himself increasingly in conflict with the government-backed film industry of Egypt and its heavy political restrictions in filmmaking. In 1964 he voluntarily went into exile to Lebanon, where he shot two musicals: Bayya al-Khawatim (1965, Ring Seller ) and Rim al-Dhahab (1967, Sands of Gold ). Ring Seller became one of the best musicals of Arab cinema, bringing success to Youssef Chahine, whereas Sands of Gold , due to delays in shooting and its box-office failure, forced him to quite his work in Lebanon and return to Egypt.”

But then, thanks to the French co-productions previously cited (particularly Adieu Bonaparte and Alexandria Again and Forever) Chahine won international fame and with it considerable artistic prestige for Egypt.