Sadly the facts are not in dispute.

“On his daily radio and television shows, Glenn Beck has elevated once-obscure conservative thinkers onto best-seller lists. Recently, he has elevated a 78-year-old liberal academic to celebrity of a different sort, in a way that some say is endangering her life.
Frances Fox Piven, a City University of New York professor, has been a primary character in Mr. Beck’s warnings about a progressive take-down of America.” 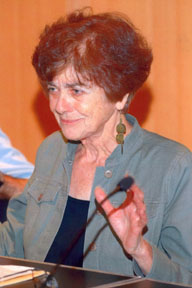 “Ms. Piven, Mr. Beck says, is responsible for a plan to “intentionally collapse our economic system.”
Her name has become a kind of shorthand for “enemy” on Mr. Beck’s Fox News Channel program, which is watched by more than 2 million people, and on one of his Web sites, The Blaze. This week, Mr. Beck suggested on television that she was an enemy of the Constitution.
Never mind that Ms. Piven’s radical plan to help poor people was published 45 years ago, when Mr. Beck was a toddler. Anonymous visitors to his Web site have called for her death, and some, she said, have contacted her directly via e-mail.
In response, a liberal nonprofit group, the Center for Constitutional Rights, wrote to the chairman of Fox News, Roger Ailes, on Thursday to ask him to put a stop to Mr. Beck’s “false accusations” about Ms. Piven.
“Mr. Beck is putting Professor Piven in actual physical danger of a violent response,” the group wrote.
Fox News disagrees. Joel Cheatwood, a senior vice president, said Friday that Mr. Beck would not be ordered to stop talking about Ms. Piven on television. He said Mr. Beck had quoted her accurately and had never threatened her.
“ ‘The Glenn Beck Program,’ probably above and beyond any on television, has denounced violence repeatedly,” Mr. Cheatwood said.
He said he had no knowledge of the threats against Ms. Piven, and noted that The Blaze was operated independently of Fox News.”

“Ms. Piven said in an interview that she had informed local law enforcement authorities of the anonymous electronic threats. But she added, “I don’t want to give anybody the satisfaction of thinking they’ve got me trembling.”
The interest in Ms. Piven is rooted in an article she wrote with her husband, Richard Cloward, in 1966. The article, “The Weight of the Poor: A Strategy to End Poverty,” proposed that if people overwhelmed the welfare rolls, fiscal and political stress on the system could force reform and give rise to changes like a guaranteed income. By drawing attention to the topic, the proposal “had a big impact” even though it was not enacted, Ms. Piven said. “A lot of people got the money that they desperately needed to survive,” she said.”

“In Mr. Beck’s telling on a Fox broadcast on Jan. 5, 2010, Ms. Piven and Mr. Cloward (who died in 2001) planned “to overwhelm the system and bring about the fall of capitalism by overloading the government bureaucracy with impossible demands and bring on economic collapse.” Mr. Beck observed that the number of welfare recipients soared in the years after the article, and said the article was like “economic sabotage.”
He linked what he termed the Cloward-Piven Strategy to President Obama’s statement late in the 2008 presidential campaign that “we are five days away from fundamentally transforming the United States of America.”
Mr. Beck has invoked Ms. Piven dozens of times since. Conservative Web sites, like the ones operated by Andrew Breitbart, have also spent time dissecting her articles and speeches.”

And we all know how he operates, don’t we folks?

“Ms. Piven came under additional scrutiny when she wrote in the liberal magazine The Nation this month that unemployed people should be staging mass protests.
Her assertions that “an effective movement of the unemployed will have to look something like the strikes and riots that have spread across Greece,” and that “protesters need targets, preferably local and accessible ones,” led Mr. Beck to ask on Fox this week, “Is that not inciting violence? Is that not asking for violence?” Videos of fires in Greece played behind him.
“That is not a call for violence,” Ms. Piven said Friday of the references to riots. “There is a kind of rhetorical trick that is always used to denounce movements of ordinary people, and that is to imply that the massing of people itself is violent.”
That, she said, is what Mr. Beck is doing, trying to frighten his viewers.
The Nation, which has featured Ms. Piven’s columns for decades, quoted some of the threats against her in an editorial this week that condemned the “concerted campaign” against her.
One such threat, published as an anonymous comment on The Blaze, read, “Somebody tell Frances I have 5000 roundas ready and I’ll give My life to take Our freedom back.” (The spelling and capitalizing have not been changed.)
That comment and others that were direct threats were later deleted, but other comments remain that charge her with treasonous behavior.
Mr. Beck generally does not have guests on his hourlong Fox program, and Ms. Piven has not been invited to defend herself on the program. Neither Mr. Beck nor any of his producers have ever contacted her, she said.
The Center for Constitutional Rights said it took exception to the sheer quantity of negative attention to Ms. Piven.
“We are vigorous defenders of the First Amendment,” the center said in its letter to Fox. “However, there comes a point when constant intentional repetition of provocative, incendiary, emotional misinformation and falsehoods about a person can put that person in actual physical danger of a violent response.” Mr. Beck is at that point, they said.
Ms. Piven, for her part, said she was amazed that she was still being brought up on Mr. Beck’s show as recently as Wednesday.
“There are hundreds and hundreds of people who are just boiling with anger and hate,” she said.”

And they have exceptionally easy access to guns. Unlike the Folk Crusaders.