Surely the op-ed is not in dispute.

Well of course you’re not, Dan. Nobody thinks you are.

Except maybe the kid. 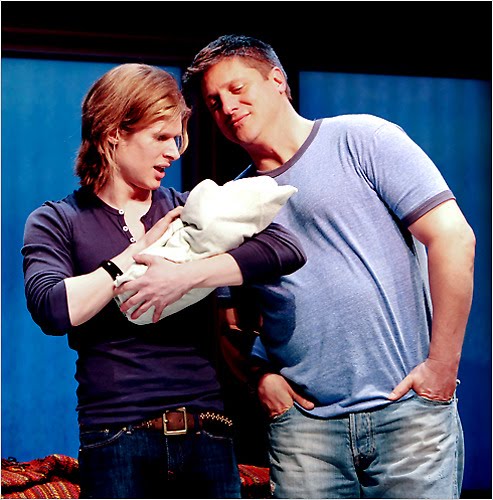 “Now that the Republicans hold the House, only wishful thinkers and the deeply delusional expect to see any movement on the lesbian, gay, bisexual and transgender legislative agenda this year or next. Nevertheless, President Obama should address gay rights in his State of the Union speech this week, and he should tackle the biggest, most meaningful right of them all: the right to marry.”

What he should do and what he will do are of course two entirely different things.

“When he was a candidate for the Illinois State Senate in 1996, Mr. Obama told a gay publication that he supported “legalizing same-sex marriages.” Twelve years later, right about the time he decided to run for president, he came out against marriage equality.”

Indeed he did. And here are the gory details:

“JAN. 13, 2009
CHICAGO – During his run for Illinois state Senate in 1996, Barack Obama stated his unequivocal support for gay marriage, according to an exclusive story in the Jan. 14, 2009 Windy City Times newspaper.
President-elect Obama’s answer to a 1996 Outlines newspaper question on marriage was: “I favor legalizing same-sex marriages, and would fight efforts to prohibit such marriages.” There was no use of the phrase “civil unions”. This answer is among those included in this week’s Windy City Times feature on Obama’s evolving position on gay marriage. Windy City Times also includes his answers to the candidate questionnaire of IMPACT, at one time a gay political action committee in Illinois. In that survey he also stated his support of same-sex marriage.
During the final weeks of the presidential campaign last fall, several media outlets contacted Windy City Times because of an old internet story from the 1996 Illinois state Senate race. In that campaign, Outlines newspaper reported that 13th District candidate Barack Obama supported gay marriage. Reporters wanted to know what exactly Obama had said.
Outlines summarized the results in that 1996 article by Trudy Ring, but did not list exact answers to questions. In that article Outlines did note that Obama was a supporter of same-sex marriage and that article was never challenged or corrected by Obama. Just recently, the original Outlines and IMPACT surveys were found in the newspaper’s archives.
More recently, as Obama has run for higher office, from U.S. senate to president, he has further shaped his views on marriage, and now he does not back same-sex marriage, but favors civil unions.
The Jan. 14 Windy City Times has articles by Publisher and Executive Editor Tracy Baim looking at Obama’s marriage record, including from a 2004 interview she conducted with the U.S. senate hopeful, and also an article by Timothy Stewart-Winter, a doctoral candidate at the University of Chicago, who is writing his dissertation on lesbian and gay politics in Chicago. Stewart-Winter provides a look at the context of Obama’s race in 1996 against incumbent Alice Palmer.”

Chicago? Well we all know how things are in Chicago.

“But, as the president likes to say, “The arc of the moral universe is long but it bends toward justice.” Where a Gallup poll in 1996 found that just 27 percent of the nation supported equal marriage rights for same-sex couples, a CNN poll last summer found that a majority now supports marriage equality. “

And here are those gory details:

“(CNN) – Nearly half of all Americans think the Constitution provides same-sex couples the right to marry, according to a new CNN/Opinion Research Corporation Poll.
Forty-nine percent of respondents think gay and lesbian couples have the constitutional right to get married and have their marriage recognized by law, while 51 percent say those rights do not exist.

The gap widens dramatically when age is taken into account. Nearly six in ten Americans under the age of 50 say gay rights are protected under the Constitution. Only 38 percent of Americans over the age of 50 say the same thing.
“This is one of the few instances when independents side with one party rather than falling in between the Dems and the GOP,” CNN Polling Director Keating Holland said. “56 percent of Democrats and 57 percent of Independents think the Constitution conveys the right to marry to same-sex couples. Only a quarter of all Republicans agree.”

In a separate question, some respondents were asked whether the Constitution should (rather than does) give gays and lesbians the right to marry.
“That’s different than asking respondents what they think is currently in the Constitution,” says CNN Polling Director Keating Holland.
In that separate question, 52% said that same-sex couples should have the constitutional right to marry; 46% say the Constitution should not convey that right.
“It’s possible that this is an indication that some Americans believe that the right to marry is not in the Constitution but would support an amendment to add it,” Holland notes. “But taking into account the sampling error, there is no statistical difference between the 49 percent who think the Constitution already gives that right to gays and the 52 percent who think it should. So it’s difficult to draw any conclusion beyond the basic finding that Americans are closely divided on this topic.”
The questions asked in this poll have a range of sampling errors from plus/minus 4.5 to 8 percent.”

“The president — perhaps after introducing Daniel Hernandez Jr., the openly gay intern credited with saving Representative Gabrielle Giffords’s life — should declare that the trend is clear: this country increasingly believes that Mr. Hernandez and other lesbian, gay, bisexual and transgender Americans should have all the same rights and responsibilities as other citizens.”

Yep. The only problem is they may not be “rights and responsibilites” to interest anyone with a moral center.

“Gay Americans are eventually going to win on marriage just like we won on military service, the president should tell Congress, so why not save everyone on both sides of the debate a lot of time, trouble and money by approving the entire gay rights agenda? Send the Employment Non-Discrimination Act, the Student Non-Discrimination Act, the Uniting American Families Act and the repeal of the odious Defense of Marriage Act to his desk for his signature.”

“He can assure the lawmakers that, yes, there’s something in it for Americans who disapprove of homosexuality too.”

“Social conservatives long to raise their children in a country where they don’t have to hear about homosexuality every time they turn on the news. I’d like raise my son in a country like that too. And guess what? In countries like Canada — where the fight over gay rights is essentially over, where there is gay marriage, open military service and employment protections — homosexuality hardly ever makes the front pages of newspapers. There’s nothing much to report.”

Well I wouldn’t be too sure about that Dan. There’ll be a lot of this

Tons more of this —

And that can only lead to this

“Conservatives can’t get rid of us, but they can hear less from and about us. They just have to bend toward justice.”

Or buy a new umbrella because —