Thanks Barry. And it’s much appreciated that you’re willing to back up your words with actions.

“WASHINGTON — President Barack Obama will host a White House conference next week on preventing bullying.
The White House says the March 10 conference will bring together students, parents and educators to discuss ways to end bullying and make schools safer for students.
Aides say this is a personal issue for both the president and his wife, Michelle Obama. The president taped a message for the “It Gets Better Campaign” last fall following the deaths of several young people who were bullied for being gay.
Obama said at the time that it was important to dispel the notion that bullying is an inevitable part of growing up. “

And as you well know it can continue in other forms long after you’ve grown up.

Mike Huckabee isn’t known for endorsing fringe conspiracy theories about President Obama — in fact, he once called the “birther” claim that Obama was born outside the U.S. “nonsense.” So it surprised many observers when Huckabee spun an elaborate theory on a talk-radio show Tuesday (listen below) about how Obama’s worldview was shaped by being raised in Kenya (he wasn’t) by his Kenyan father (whom he barely knew). A spokesman later said Huckabee “misspoke,” and meant Indonesia (where Obama spent several years as a boy), not Kenya. But was this really just a slip of the tongue?
Huckabee’s winking at birthers in the Republican ranks: “There are no coincidences on right-wing radio,” says Taylor Marsh at her blog. So when a potential 2012 GOP frontrunner says Obama grew up in Kenya, “it isn’t by accident.” Huckabee was clearly “ringing the bell” for a “wingnut radio host” and his appreciative audience. But what makes the “obvious smear” on Obama so “venomous” is that the likable Southerner knew the media would let him “weasel out” of it.
“Mike Huckabee’s venomous charm”
This was an honest mistake: “Let’s call this off right now,” says David Weigel at Slate. “Mike Huckabee is not a birther.” Perhaps he threw “a few different ideas in the blender,” including a right-wing theory about Obama’s “Kenyan anti-colonial thinking.” But the most likely explanation is that Huckabee is just “ill-informed” about Obama’s life story. And really, would Obama “pass a pop quiz on the early years of Mike Huckabee”?
“Mike Huckabee is not a birther”
Huckabee believes this nonsense: “I don’t buy the misspoke explanation,” says Andrew Sullivan at The Atlantic. If you look at his comments, it’s clear that Huckabee is a birther of sorts — he only doubts true birthers’ claims because the Clintons didn’t dig up any dirt on Obama’s citizenship in 2008. “Huckabee always seems a pleasant fellow,” but then he says something like this that reminds you “just how extreme this affable man actually is.” “

He’s about as “pleasant” as Mike Harman.

“WASHINGTON (AP) — The Supreme Court ruled Wednesday that the First Amendment protects fundamentalist church members who mount anti-gay protests outside military funerals, despite the pain they cause grieving families.
The court voted 8-1 in favor of the Westboro Baptist Church of Topeka, Kan. The decision upheld an appeals court ruling that threw out a $5 million judgment to the father of a dead Marine who sued church members after they picketed his son’s funeral.
Chief Justice John Roberts wrote the opinion for the court. Justice Samuel Alito dissented.
Roberts “

Seen here with his wife, daughter and screamingly gay son.

“said the First Amendment shields the funeral protesters, noting that they obeyed police directions and were 1,000 feet from the church.
“Speech is powerful. It can stir people to action, move them to tears of both joy and sorrow, and — as it did here — inflict great pain. On the facts before us, we cannot react to that pain by punishing the speaker,” Roberts said. “As a nation we have chosen a different course — to protect even hurtful speech on public issues to ensure that we do not stifle public debate.”

“Our profound national commitment to free and open debate is not a license for the vicious verbal assault that occurred in this case,” he said.
Matthew Snyder died in Iraq in 2006 and his body was returned to the United States for burial. Members of the Westboro Baptist Church, who have picketed military funerals for several years, decided to protest outside the Westminster, Md., church where his funeral was to be held.
The Rev. Fred Phelps and his family members who make up most of the Westboro Baptist Church have picketed many military funerals in their quest to draw attention to their incendiary view that U.S. deaths in Afghanistan and Iraq are God’s punishment for the nation’s tolerance of homosexuality.
They showed up with their usual signs, including “Thank God for dead soldiers,” ”You’re Going to Hell,” ”God Hates the USA/Thank God for 9/11,” and one that combined the U.S. Marine Corps motto, Semper Fi, with a slur against gay men.
The church members drew counter-demonstrators, as well as media coverage and a heavy police presence to maintain order. The result was a spectacle that led to altering the route of the funeral procession.”

And there have been all manner of other “spectacles” cramping Westboro’s style since.

“Several weeks later, Albert Snyder was surfing the Internet for tributes to his son from other soldiers and strangers when he came upon a poem on the church’s website that attacked Matthew’s parents for the way they brought up their son.
Soon after, Snyder filed a lawsuit accusing the Phelpses of intentionally inflicting emotional distress. He won $11 million at trial, later reduced by a judge to $5 million.
The federal appeals court in Richmond, Va., threw out the verdict and said the Constitution shielded the church members from liability.
Forty-eight states, 42 U.S. senators and veterans groups sided with Snyder, asking the court to shield funerals from the Phelps family’s “psychological terrorism.”
While distancing themselves from the church’s message, media organizations, including The Associated Press, urged the court to side with the Phelps family because of concerns that a victory for Snyder could erode speech rights.
Roberts described the court’s holding as narrow, and in a separate opinion, Justice Stephen Breyer “ 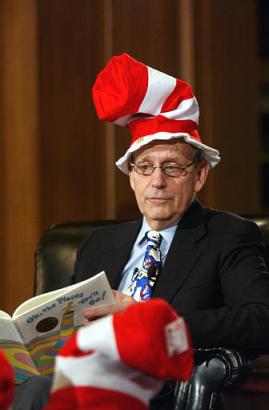 “suggested in other circumstances, governments would not be “powerless to provide private individuals with necessary protection.”
But in this case, Breyer said, it would be wrong to “punish Westboro for seeking to communicate its views on matters of public concern.”

“Men will never be free until the last king is strangled with the entrails of the last priest.”
— Denis Diderot

Sing us out Tom