“Doris Day (born Doris Mary Ann Kappelhoff; April 3, 1922)is an American actress and singer, and an outspoken animal rights activist since her retirement from show business. Her entertainment career began in the 1940s as a big band singer. In 1945 she had her first hit recording, “Sentimental Journey”. In 1948, she appeared in her first film, Romance on the High Seas. During her entertainment career, she appeared in 39 films, recorded more than 650 songs, received an Academy Award nomination, won a Golden Globe and a Grammy Award, and, in 1989, received the Cecil B. DeMille Award for lifetime achievement in motion pictures.
As of 2009, Day was the top-ranking female box office star of all time and ranked sixth among the top ten box office performers (male and female)”

That’s putting it mildly. A great singer an instinctively great actress, Doris has had a hard life — despite a fantastic career. She’s now comfortably retired in Carmel California. Every year a local dj. gives her a radio salute, on which she appears to thank her legion and fans.

Here’s one she gave to Jonathan Schwartz (from the Discovering Doris site.)

“In 1975, Day released her autobiography, Doris Day: Her Own Story, an “as-told-to” work with A. E. Hotchner. The book detailed her first three marriages:
To Al Jorden, a trombonist whom she had met when he was in Barney Rapp’s Band, from March 1941 to 1943. Her only child, son Terry Melcher, was born from this marriage. Jorden, who was reportedly physically abusive to Day, committed suicide in 1967 by a self-inflicted gunshot wound. “

Her marriage to Jordan was the partial inspiration for Martin Scorsese’s New York New York .

“To George Weidler (a saxophonist), from March 30, 1946 to May 31, 1949. Weidler, the brother of actress Virginia Weidler, and Day met again several years later. During a brief reconciliation, he helped her become involved in Christian Science.
To Martin Melcher, whom she married on April 3, 1951. This marriage lasted far longer than her first two. Melcher adopted Terry (thus renaming the boy Terry Melcher), and produced many of Day’s movies. After her autobiography was published, Day married one last time.
Her fourth and last marriage was to Barry Comden, who was roughly a decade younger, from April 14, 1976 until 1981. Comden was her first husband from outside of show business. Comden was the maitre d’ at one of Day’s favorite restaurants. Knowing of her great love of dogs, Comden endeared himself to Day by giving her a bag of meat scraps and bones on her way out of the restaurant. When this marriage unraveled, Comden complained that Day cared more for her “animal friends” than she did for him. Comden died on May 25, 2009, aged 74.” 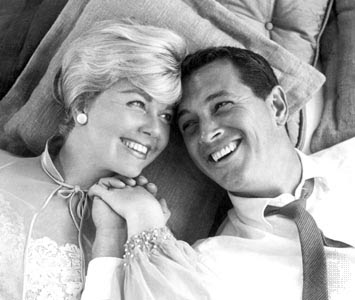 My favorite Doris is from Charles Walters’ Billy Rose’s Jumbo Terry Melcher will sing us out — with Mom doing back-up