Fait Diver: All That Fall So you think you know your ancient history, eh? Well THINK AGAIN!

“A LEADING Italian academic is facing growing calls to resign after he blamed the collapse of the Roman Empire on homosexuality.”

Now what on earth gave him that idea? Was it THIS? 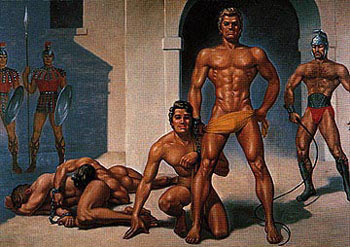 Professor Roberto De Mattei, vice-president of Italy’s Centre for National Research and who is also a devout Catholic, has already faced criticism after claiming that the Japanese tsunami and earthquake disaster was “divine punishment.”

Clearly that was this guy’s fault

“In an in terview with Radio Maria, a religious news network, Prof De Mattei, 63, said: “The collapse of the Roman Empire and the arrival of the Barbarians was due to the spread of homosexuality.”

And not Generalissimo Francesco Franco?

“The Roman colony of Carthage was a paradise for homosexuals … the abnormal presence of a few deviants infected many others.”

“Prof De Mattei based his comments on the writings of fifth-century Christian author Salviano di Marsiglia. He added: “The invasion of the Barbarians (of Rome] was seen as punishment for this moral transgression. It is well known that effeminate men and homosexuals have no place in the Kingdom of God. Homosexuality was not rife among the Barbarians, and this shows that God’s justice comes throughout history, not at the end of time.”

If that’s your story, you stick to it dear.

“Fellow historians, gay rights groups and politicians expressed outrage and some called on him to quit his post. Paola Concia, an MP for the opposition Democratic Left, said: “I have tabled an urgent call for the education minister, Maria Stella Gelmini, to step in and intervene.”

“Prof De Mattei was appointed to his post three years ago and is a close friend of the education minister as well as prime minister Silvio Berlusconi, who once famously said: “Better to love girls than be gay.”

“Emilio Gabba, a leading light on ancient Roman history, said: “It is highly improbable that homosexuality led to the fall of the Roman Empire.” 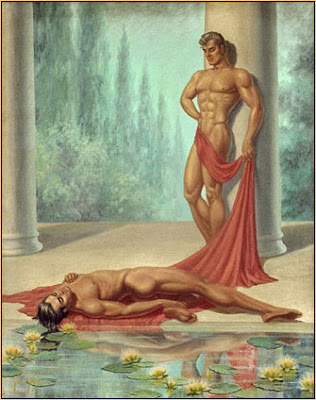 “Professor Lellia Cracco Ruggini, an expert on Roman history at Turin University said: “There is no proof that Rome had a high number of homosexuals. Rome did not fall because it was gay.” 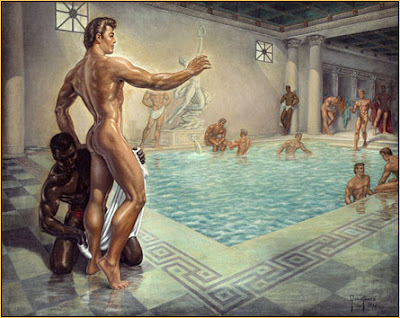 “The 17th-century expert, Edward Gibbon, famously wrote that “of the first 15 emperors, Claudius was the only one whose taste in love was entirely correct”.

And we all know what happens to the “incorrect.”

“Homosexuality is widely portrayed in certain aspects of ancient Roman art and was widely seen as acceptable behaviour 2,000 years ago, with officials often having slaves as gay lovers.”

Hubba-Hubba! (not to be confused with Bunga-Bunga )

Sing us out Tony!