Well I’m sure you’ve all heard about THIS

“A controversy has bubbled up over a photo spread in the most recent J. Crew catalogue. Under the caption “Saturday with Jenna” the company’s president and creative director Jenna Lyons is pictured laughing with her 5-year-old son Beckett, holding his little feet in her hand. A bottle of hot pink Essie nail polish is pictured below them.
“Lucky for me I ended up with a boy whose favorite color is pink,” reads the caption. “Toenail painting is so much more fun in neon.”
To some the photo depicts a sweet moment between a stylish mom and her equally stylish son. To others, however, it reads as a questionable endorsement of parental support of transgendered or gender-neutral children.
Erin R. Brown writing on the website of the Culture and Media Institute — whose mission is to uphold traditional values — says the spread “features blatant propaganda celebrating transgendered children.” She adds that “Jenna’s indulgence (or encouragement) could make life hard for the boy in the future.”
“This is a dramatic example of the way that our culture is being encouraged to abandon all trappings of gender identity — homogenizing males and females when the outcome of such ‘psychological sterilization’ [my word choice] is not known,” Psychiatrist Keith Ablow writes on FoxNews.com.
“If you have no problem with the J. Crew ad, how about one in which a little boy models a sundress? What could possibly be the problem with that?” he continues. (For the record, Ablow has a lot of problems with it).
But parenting expert Dr. Susan Bartell says the fact that young Beckett likes the color pink has nothing to do with whether or not he’ll have any transgender issues. Speaking on the CBS Early Show, Dr. Bartell said, “[Our kids] gender is going to emerge naturally as part of who they are and has nothing to do with whether we put pink nail polish on them.”
We’d love to know what you think. What would you do if your 5-year-old son’s favorite color was pink?”

But have you seen Jon Stewart?

Hey, the kid’s only five. Who knows where his future fashion choices may lead? 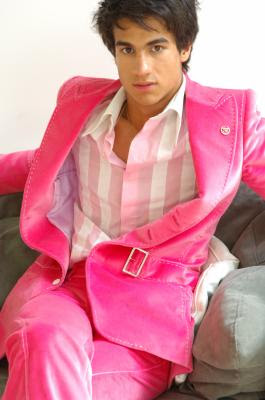 In other words, no matter what happens — CUE KAY!