Larry Kramer vs. The Aztec Mummy

“It is very difficult to take a strong position in the gay world without being, at the least, misunderstood, and at the most extreme, vilified mercilessly. I suppose it’s like this in the straight world as well. Perhaps I shouldn’t bitch so when I’m taken to such extremes as a recent quote from me in The New York Times has provoked. I have always maintained fervently that in our world, in any world, you have to speak loudly and boldly to be heard at all. And my loud voice, which I cherish and try to use as much as I can to aid causes and beliefs I support, is one I wish everyone else also possessed and used. God, whoever made us, gave us voices to use, to speak up with. So I shouldn’t complain when my anger comes back to hit me in the face. Usually I don’t. Usually I’m pleased when my words provoke a usually passive population into getting off their asses and, well, using their own voice.
I am upset this time, though, because I’m being tarred for something I did not say. And this misstatement in my behalf is now escalating beyond sane margins and I feel the need to step in and respond, to hopefully turn this into what I believe is known as “a teachable moment.”
I did not say, “Larry Kramer Hates Gay Marriage,” as the Times quote has now allowed many bloggers around the world to revise, rewrite, and circulate like mad bulls seeing red.”

The NYT hasn’t changed much since Abe Rosenthal’s time, Larry. In fact I suspect his mummified remains are still pulling the strings from beyond the grave.

I have, of course blogged about the late unlamented bag of shit in the past. There’s no reason to suspect his influence has waned in any way, fitting in as it does so snugly with the paper’s overall mendacity. It’s little more than a CIA “asset” dutifully spreading corporate propaganda including the lies said corporations wish to spread via the government it owns (eg. Judy Miller and the WMD’s that weren’t there.)

Consequently when it comes to Teh Ghey, the NYT is sure to show who’s boss.

“The historic and cultural significance of this moment is that once again the gay population of this country continues to accept second best. These marriages, in whichever state, are what I call ‘feel-good marriages.’ They convey little in the way of benefits (and in some instances they are even financially punishing to those who embark on them). Compared to the benefits heterosexual marriages convey, gay marriages are an embarrassment – that we should accept so little, and with so much hoopla of excitement and self-congratulation. Most straight people who are congratulating us so effusively don’t understand that these marriages share none of their federal benefits and entitlements, the right to inherit without punishing taxation, the right for our joint incomes not to be taxed so hideously high, the right to share insurances — there are over one thousand benefits worth money that the federal government bestows on heterosexual marriages and which our state marriages don’t. So why do we continue to get so excited when so few worthless crumbs are thrown our way? I have from the beginning never understood the philosophy and tactics of our various organizations who appear to be calling the shots on this issue. If we are to wait for a majority of states to recognize gay marriages, we’ll all be dead. When are we going to recognize that until the Supreme Court blesses our union, we continue to be worthless and powerless, which is the way our enemies wish us to remain. When will we face up to the fact that no sooner does a state grant us marriage, than our enemies immediately tie up the courts in endless litigations to disallow them, as in the monstrous mess that has become California. Our enemies have bottomless pockets to fight us with. It has been discovered that the biggest contributors to the California wars are and have been the Mormon and Catholic churches. I do not disparage any gay couple’s desire to wed in New York, or anywhere else, and in so doing feel and take joy from this act. But let us all recognize that beyond this euphoria, these marriages are hardly worth the paper they are printed on. And once again, I can only raise the cry: how long are we as a people going to accept such shabby and unequal treatment?”

Here’s what the NYT printed:

“Larry Kramer, the playwright and longtime gay rights activist, said that for as long as the federal government continues not to recognize same-sex marriages, the celebrations in New York on Sunday would be misguided.

“’These marriages, in whichever state, are what I call feel-good marriages,’ Mr. Kramer said. ‘Compared to the benefits heterosexual marriages convey, gay marriages are an embarrassment—that we should accept so little, and with so much hoopla of excitement and self-congratulation.’”

As a result, Larry continues —

“Now this response of mine has been headlined across the globe, from Broadway to the West End, from Kenya to New Zealand, as “Larry Kramer hates gay marriage,” followed by many commentaries about what a crank I am, what an old fart I have become, coupled with that classic gay insult, “and he’s so ugly,” 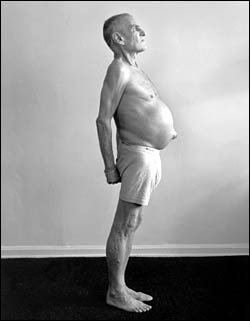 “ending with “when is he ever going to shut up?” As I said, I’m used to this. It comes with the territory. I just wish that ALL of us could read and digest and comprehend my complete statement as above and realize what I am really saying: We are being bought off, once again, with only a miniscule fraction of what we are entitled to as equal human beings under our country’s Bill of Rights.
Believe me when I say that I very much want to get married to my partner, but only when that marriage is equal to what heterosexual marriages convey by law, the law of the United States, and not just New York State.

And I do not disparage those who choose to marry under the present woefully unequal conditions. I just wish that they, and all gay people everywhere, would realize that they are accepting so little when we are pledged so much more by and in this one nation, indivisible, with liberty and justice for all.”

The marriages that are now taking place in New York are charming and delightful. But that charm and delight will evaporate faster than spit on a griddle if they’re not followed up with a Full Court Press push to overturn DOMA.

They will not prevail.

Dave Koz will sing us out Larry