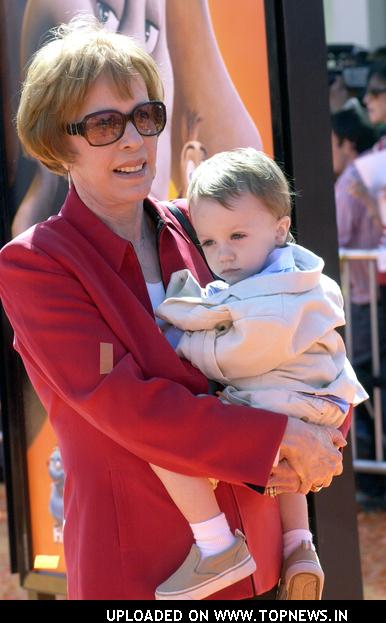 Can’t recall which sketch that quote from the comedy goddess comes from. (Gay Jeopardy bonus points to the first reader who can cite it.) But they were the first words that came to mind on readeing Ross Asshat’s 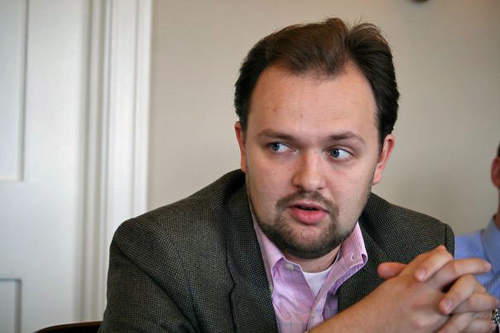 attempted ass-covering over this creep — 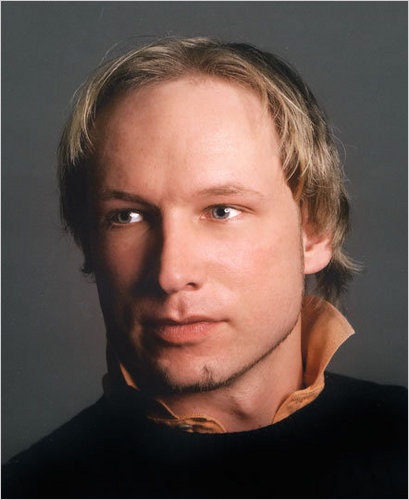 Surely the facts must be rearranged

“For many years, a quiz entitled “Al Gore or the Unabomber?” circulated on conservative Web sites. The quiz juxtaposed passages from the former vice president’s eco-manifesto “Earth in the Balance” with quotes from Theodore Kaczynski’s critiques of industrial civilization and asked the reader to guess which writer was which.
Was it the bearded hermit who hailed “isolated pockets of resistance fighters” for struggling against modern society’s “assault on the earth”? No, that would be the former vice president. Was it Kaczynski, the mathematics Ph.D. turned mad bomber, who complained about the “destructive” impact of bringing a child into “the hugely consumptionist way of life so common in the industrial world”? No, Gore again.
Enterprising left-wing bloggers have already begun to play a similar game with Anders Behring Breivik, the Norwegian man who apparently justified last week’s mass murder of helpless teenage campers with a 1,500-page “compendium” calling for a right-wing revolution against Europe’s ruling class. Judging by the manifesto’s contents, Breivik has roughly the same relationship to the cultural right that Kaczynski had to certain strains of environmentalism. The darkest aspects of his ideology belong strictly to the neo-fascist fringe. But many of his beliefs and arguments echo the rhetoric of mainstream cultural conservatives, in Europe and America alike.”

Or maybe they belong to the likes of Asshat pals Pam Geller and Robert Spencer.

“Despite what the Norwegian authorities suggested over the weekend, those beliefs probably aren’t a form of Christian fundamentalism. Breivik’s writings bear no resemblance to the theology of a Jerry Falwell or an Oral Roberts, and his nominal Christianity (“I guess I’m not an excessively religious man,” he writes at one point) seems to be more of an expression of European identity politics and anti-Islamic chauvinism than any genuine religious fervor. “

“But it’s fair to call Breivik a right-winger.”

“As Commentary Magazine editor John Podhoretz put it, the Norwegian killer is “exactly the kind of psychotic ideologue of the right so many in this country instantly assumed Jared Loughner, the schizophrenic who shot Rep. Gabrielle Giffords” to be. His compendium quotes repeatedly from conservative writers on both sides of the Atlantic, and it’s filled with attacks on familiar right-wing targets: Secularism and political correctness; the European Union and the sexual revolution; radical Islam and the academic left.”

Nice try at moving the goal posts. But unlike Loughner, Anders Behring Breivik, speaks in a perfectly comprehensible way and has posted a lengthy detailed manifesto on the net outlining his beliefs and the reasons for his murderous campaign. Consequently in legal terms he can’t claim an “insanity defense” — as insane as his beliefs and actions may be on an objective level. He knew waht he was doing and why.

“Indeed, stripped of their context, some of his critiques of multiculturalism and immigration resemble arguments that have been advanced, not just by Europe’s far-right parties, but by mainstream conservative leaders such as David Cameron in Britain, Angela Merkel in Germany and Nicolas Sarkozy in France.”

But Breiviek has — at least for the moment — won.

“Indeed, stripped of their context, some of his critiques of multiculturalism and immigration resemble arguments that have been advanced, not just by Europe’s far-right parties, but by mainstream conservative leaders such as David Cameron in Britain, Angela Merkel in Germany and Nicolas Sarkozy in France.”

All of whom are preparing to massacre their respective country’s Muslim inhabitants and/or supporters — right Ross?

“This means that last week’s tragedy is also a political opportunity for Europe’s left-of-center politicians, should they choose to respond to Breivik’s rampage the way President Bill Clinton responded to the 1995 Oklahoma City bombing.
Timothy McVeigh’s connections to Republican politics were several degrees short of tangential, but Clinton successfully linked the heartland terrorist to talk radio and the government shutdown, implying that McVeigh’s crime was part of a broader story of antigovernment conservatism run amok.”

Stoked by the Republican party in ways far more tangential than Asshat is willing to admit.

“Judging by Breivik’s manifesto, the Continent’s left-wing parties won’t have to work nearly that hard to connect the Norwegian’s act of terrorism to Europe’s broader rightward turn.
How should European conservatives react? Not with the pretense that there’s somehow no connection whatsoever between Breivik’s extremism and the broader continental right. While his crimes should be denounced and disowned, their ideological pedigree has to be admitted.”

“But this doesn’t mean that conservatives need to surrender their convictions. The horror in Norway no more discredits Merkel’s views on Muslim assimilation than Ted Kaczynski’s bombs discredited Al Gore’s views on the dark side of industrialization.”

This is how modern “Conservatism” works, folks: When in doubt blame Al Gore.

“On the big picture, Europe’s cultural conservatives are right: Mass immigration really has left the Continent more divided than enriched, Islam and liberal democracy have not yet proven natural bedfellows and the dream of a postnational, postpatriotic European Union governed by a benevolent ruling elite looks more like a folly every day.
For decades, Europe’s governing classes insisted that only racists worried about immigration, only bigots doubted the success of multiculturalism and only fascists cared about national identity. Now that a true far-right radical has perpetrated a terrible atrocity, it will be easy to return to those comforting illusions.”

They weren’t illusions — and they certainly weren’t comforting.

“But extremists only grow stronger when a political system pretends that problems don’t exist. Conservatives on both sides of the Atlantic have an obligation to acknowledge that Anders Behring Breivik is a distinctively right-wing kind of monster. But they also have an obligation to the realities that this monster’s terrible atrocity threatens to obscure.”

What you want to obscure is cross-Atlantic culpability — meaning of course the lovely Pam.

— a Birther, given to posting the likes of THIS on her blog, Atlas Shrugs.

Anders, a frequent poster on her blog has created quite a pickle for the poor dear.

“It is almost inconceivable that one passing reference in a 1,516-page screed would be sufficient for the Islamic/leftist machine to assign blame to yours truly, and to those of us who are working diligently to educate the people. It’s extraordinary that this is being swallowed whole by the mainstream media. It’s extraordinary that we experience thwarted plots, acts of jihad on a weekly and sometimes daily basis, without the mainstream media ever referring to the very ideology that inspires, commands, and prescribes such violence. But the left wing alternative media is madly running with this.”

Mentioning the Truth is “running amok”? But then in Pam’s World The World’s Worst Newspaper(which is surprisingly onto her) is an extreme left-wing rag.

“We’re still waiting for the Department of Defense to speak to the religious motivation in the Fort Hood jihad. And yet here we are with a mass murderer who has been planning this for nine years, long before I ever heard of a blog, and who sought to use us, to use our work as a basis for his maniacal, homicidal rampage — and we are held responsible. Notice that no attention is being paid to last week’s jihad attack in Mumbai. Is it because it’s Islam, and the media is Sharia-compliant? Is it because it’s brown people? Are we going to go there? That’s what the left would say if conservatives were not paying sufficient attention to murders in a non-Western country.”

“There is only a single and insignificant reference to me in Breivik’s manifesto. The 55 references to Spencer are mostly quotes from Muslim scriptures. But Breivik cites LGF numerous times, in a very different way. He includes a long diatribe against Charles Johnson, whom he clearly admired until he felt betrayed enough to snap. The killer speaks about Charles Johnson obsessively and wrings his hands about Johnson’s turn to the left. Could this perhaps have been the provocation? Could this have been what caused him to snap?”

You tell me, bitch!

“Breivik also refers favorably to Obama. Does that make the president culpable as well?”

“This whole exercise is ridiculous. Anders Behring Breivik is responsible for his actions. If anyone incited him to violence, it was Islamic supremacists. If anything incited him to violence, it was the Euro-Med policy.
Spencer wrote, “This disgusting neo-Nazi, excluded from SIOE because of his Nazi ties, epitomizes the disrespect for life and the contempt for humane values that terrorism embodies, and that we have dedicated our lives to resisting. Whether the challenge to human rights and to the dignity of the human person comes from neo-Nazis or Islamic supremacists, we are determined to continue to resist it, and to do everything in our power to defend the principles of freedom upon which the best of human civilization has always been based.”

I have no doubt your feelings about this run exceptionally deep, Pam