“Homosexuality is a perverted spirit that has existed from the beginning of creation. The word of God refers to it often. That’s if you believe the Word to be truly God’s intended blueprint for his people. I have friends and loved ones who are practicing/ living as homosexuals. Yes I love can care about them. We hug and exchange gifts. We have family dinners. But how they live and their actions, behaviors – CHOICES are against the nature and character of God! Do I tell me so? Yes, of course. I know sin and it breeds like cancer!”

What do you serve at those family dinners Viki?

“UNION TOWNSHIP, N.J. (AP) — The husband of a New Jersey high school teacher accused of anti-gay postings on her Facebook page is defending his wife’s comments.
Gene Knox told WCBS-TV in New York (http://cbsloc.al/ohGMsL ) that “everybody’s entitled to an opinion.” He also told the station: “They can persecute her but they can’t prosecute her.”
The Union Township school district is investigating whether Viki Knox violated school policies when she allegedly posted remarks saying homosexuality is a sin that “breeds like cancer” and describing it as “perverted.”
Knox sat by her husband’s side during the TV interview. The station says she had been advised not to comment herself and has retained an attorney through her union.
Hundreds turned out at a school board meeting Tuesday to either denounce or defend Knox.”

“Knox apparently also wrote, “Union is not South Orange/Maplewood where one out of four families consist of two Mommies or daddies… Why parade your unnatural immoral behaviors before the rest of us? I/we do not have to accept anything, anyone, any behavior or any choices! I do not have to tolerate anything others wish to do.”
Meanwhile, a rally was held Tuesday night declaring that “students have rights,” as those at the event held signs reading “No Hate In Our State.”
“Bigotry and prejudice can’t be taught to the kids. We’re looking at children committing suicide over this,” one man told 1010 WINS’ Eileen Lehpamer.
“It’s disgusting that she’s saying all this and posting it online. She should just keep it to herself,” said student Stephanie Rivero.
Activists from Garden State Equality, a gay rights organization, were at Tuesday night’s Union Township School Board meeting to call for Knox’s dismissal.
Steven Goldstein, the Chair of Garden State Equality, said Knox has no business being in front of a classroom.
“You can’t separate what goes on the internet from what goes on in the classroom,” said Goldstein. “The same students you teach in the classroom are going to see her as a teacher spewing such hate. The second you post on Facebook for all the world to see, it makes you a public person.”
Goldstein said the key issue is that Knox identified herself as a Union High School teacher before posting the anti-gay rant.
“Shouldn’t a school teacher be held to a higher standard?” Goldstein asked.
After the controversy, Gene Knox said that while his stance would be the same, his wife might not have posted the comments on Facebook if she had to do it again.
Dozens of counter-protesters showed up Tuesday night and said Knox has a right to freedom of speech and some agreed with the viewpoint she allegedly expressed.
“It’s just a sin, just like a lie, just like anything you do. It’s a sin,” one woman said.
“She spoke what she honestly felt in her heart, what the Bible teaches,” said Paul Simon of the Calvary Chapel of Monmouth County.”

Don’t you just love the way “Christians” speak aboud “what the Bible teaches” and what they “feel in their hearts”? The woman at the close of the top-embeded clip chrps cheerily about being “a Christian” as if it were a license to kill.

Which for her and her kind it is.

Meanwhile the situation has come to Governor Christie’s attention.

Gov. Chris Christie said he is concerned about statements made by Viki Knox, a high school teacher whose anti-gay Facebook comments set off a debate about free speech and gay rights.
“I think that kind of example is not a positive one at all to be setting for folks who have such an important and influential position in our society,” Christie said this morning on 770 WABC Radio. “I’m really concerned about those kinds of statements being made.”
Christie said he finds the comments “disturbing.”

“The district launched an investigation last week to determine whether Knox’s conduct violated any school policies. The teacher retained an attorney Friday through her union, the New Jersey Education Association.
In an earlier post, Knox had called on students in her Seekers Fellowship Bible study group to pray. “Well, the enemy is making it clear and plain as day what Seekers Fellowship needs to pray about/against,” Knox wrote beneath a photo of the display.
Christie, who was asked to comment on the brewing controversy, used as an opportunity to discuss his call to overhaul teacher evaluations and do away with the current tenure system. Christie has called for a review process that includes in-classroom evaluations and standardized tests to re-approve teachers every three years instead of life-time tenure.
“I would like to see an examination of how that teacher conducts herself in the classroom,”
Former Union Township councilman John Paragano said he brought the alleged anti-gay comments, which have since been removed, to the attention of school officials and called for Knox’s dismissal.
Last week, the superintendent said Knox is under investigation and appropriate action has and will be taken but would not say if Knox was suspended.
The American Civil Liberties Union of New Jersey has come to Knox’s defense, releasing a statement defending her First Amendment right to express herself.
There has been no decision yet from the school board at its meeting. Knox, meanwhile, is out of classroom on paid administrative leave.”

Speaking as a gay African-American

The spectacle of a once-far-more-widely-despised-than-it-is-now minority group ganging up on another minority group — to which they’re related as a sub-division — has always nauseated me. It wasn’t all that long ago when . . . 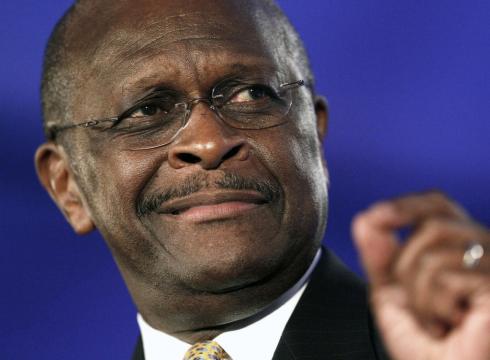 will put down the pizza

(Nice use of whiteface there Herman)

long enough to recognize the fact that those who claim they want him for POTUS, see him as a shiftless nigger eating fried chicken with his bare feet up on the desk. IOW the kind who, when it comes to the crunch, “know their place.”

As for Viki Knox and her spousal unit, they’re very bit as much the “useful idiot” he is, and as such are likely blithely unaware of Bayard Rustin and hispivotal importance to the black civil rights movement.

Naturally they would be greatly put out by the above clip — not to mention the great documentary it comes from.

Who sometimes collaborated with Touche author of The David Ehrenstein National Anthem — which Peggy Lee will now sing us out with.