Still something tells me Cloosey wouldn’t want to play for

Especially after that Prayer Meetin’

“STATE COLLEGE, Pa. (AP)—The Nebraska and Penn State players gathered at midfield before the game, kneeling together for a long moment in a quiet stadium.
Sometimes, the most powerful statements are the simplest.
Saturday’s game was a combination of pep rally, cleansing and tribute for a Penn State community rocked by the child sex-abuse scandal involving former assistant Jerry Sandusky that cost Joe Paterno his job.
Affection for Penn State and Paterno was proudly on display, both by fans and players. So was support for abuse victims.”

“This has been one of the saddest weeks in the history of Penn State and my heart goes out to those who have been victimized. I share your anger and sorrow,” new school president Rod Erickson said in a video played in the first quarter. “Although we can’t go back to business as usual, our university must move forward. We are a community.”
The crowd of 107,903 was the largest this year. Instead of sprinting onto the field, the Penn State team marched out arm-in-arm through a corridor formed by the band and the Football Lettermen Club. They then gathered with the Nebraska players, a scene normally reserved for after games.

Didn’t the Gage Brothers make a movie about this?

“Lord, we know we don’t have control of all these events that took place this week. But we do know that you are bigger than it all,” Nebraska running backs coach Ron Brown said.
Beaver Stadium was awash in blue—the color associated with child-abuse prevention—right down to the flags that accompanied the band. Outside the stadium, several students sold blue bracelets to raise money for RAINN, or the Rape Abuse Incest National Network.
“It’s therapy,” said Dave Young, a lifelong Penn State fan. “I love Penn State football, always will love Penn State football. Tough week, cried in my office a couple times when I had moments to myself.
“But now it’s time to release and watch the football game and enjoy it.”

“Indeed, once the game got underway, it was like any other Saturday at Beaver Stadium—except for the guy in charge of the home team, of course.”

“It was the first time in 46 years that Paterno was not leading the Nittany Lions, but his presence was still very much evident. When his image was shown in a video montage before the second half kicked off, the student section chanted, “Joe Paterno! Joe Paterno!” Cheers of “JoePa! JoePa!” rang out early in the fourth quarter.
The Nittany Lions’ first play was a fullback run up the middle—old school, just like JoePa.”

“But there wasn’t much else for Paterno to like. The Nittany Lions, ranked 12th and in control of the Big Ten’s Leaders Division, fell behind 17-0 before Stephfon Green scored on a 5-yard touchdown run with about 5 minutes to go in the third quarter.
On the Penn State sideline, another Paterno paced back and forth.
Jay Paterno, the quarterbacks coach, traded his usual seat in the press box for a spot on the field. Paterno also took his father’s spot on the team bus, following the starting quarterback off when Penn State arrived at the stadium.” 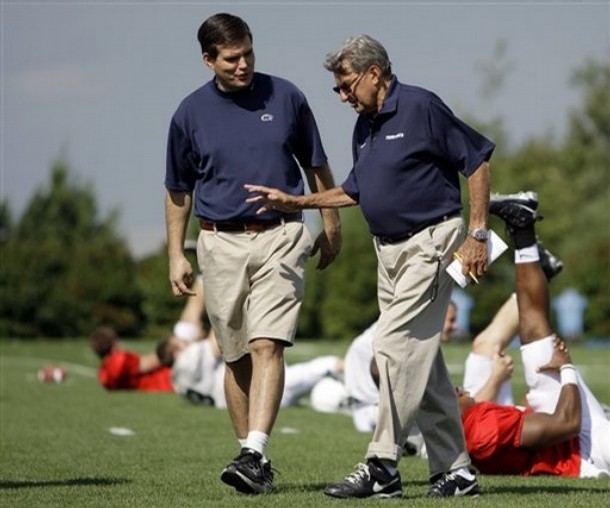 “The normally low-key Jay Paterno, a quarterbacks coach, pumped his fist and shouted, “Let’s go!” He high-fived passers-by on the way into the stadium, and several staffers gave him an encouraging embrace before he entered the locker room. Several players appeared to have tears in their eyes, and three wore shirts that read “Joe Knows Football.”

“But this Saturday was about more than football.
It was about picking up the pieces.”

“Sandusky, once considered Paterno’s heir apparent, is accused of sexually abusing eight boys over a 15-year span, with several of the alleged assaults occurring on Penn State property. Two university officials are accused of perjury, and Paterno and president Graham Spanier were fired for not doing enough to act on a 2002 report that Sandusky sodomized a young boy in the showers of the campus football complex.
“We are obviously in a very unprecedented situation,” interim coach Tom Bradley said Thursday. “I just have to find a way to restore the confidence and to start a healing process with everybody.”

Except the kids Sandusky raped of course.

“The scandal would be damaging enough to a university that prides itself on its integrity. That it involved Paterno, major college football’s winningest coach and the man who’d come to symbolize all that was good at Penn State, made it that much worse.
Thousands of angry students paraded through the streets after Paterno was fired Wednesday night, some throwing rocks and bottles and tipping over a TV news van. While the anger has waned, the fondness for Paterno has not.”

The anger is just playing possum. It’ll be back — you’ll see.

“Several students were dressed as Paterno—rolled-up khakis, white socks and thick, dark glasses—and an entire family wore shirts that read “We (Heart) JoePa.” Paul Diehm, a Penn State graduate who made the three-hour trip from Delaware, bought a blue T-shirt with the simple message, “Thanks Joe.”
“Sixty-one years of service,” he said, referring to Paterno’s years at Penn State as both an assistant and head coach. “You’ve got to say thank you. He deserves it.”

“At Joe Paterno’s house nearby, a small clutch of TV cameras and reporters stood outside. A pair of people walked to the door, rang the doorbell and left after no one answered. On the lawn were a pair of homemade signs—one read “We Love You Joe, Thank You” the other “Thanks Joe”—facing his house. Nearby a small American flag had been planted in the yard of the house.
Though police promised a heavy presence to prevent a recurrence of the violence that occurred Wednesday night, it wasn’t needed. The parking lots were filled with fans grilling out, tossing footballs and soaking up the beauty of the warm, late fall morning.
“It’s heartbreaking and sad and almost surreal. You can’t get it out of your head for more than a minute. I’m sure just about everyone here feels the same way,” Emmie Fay said as she glanced at the fellow tailgaters.
“But we’re here because we love the school and believe in it.”

Of course they do.