No Orchids For Miss Limbaugh

“Rush Limbaugh continues to bleed advertisers in the wake of his assault on Georgetown student and birth control advocate Sandra Fluke.” 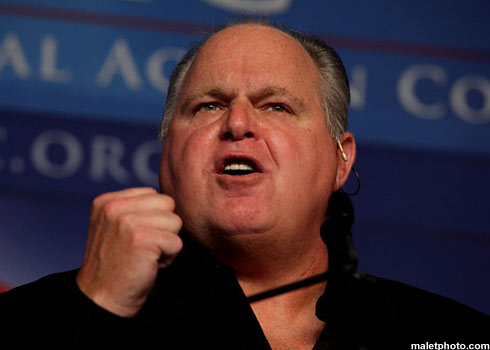 “The syndicated radio host, known for his bombastic, hard-right commentary, has now lost nine sponsors for The Rush Limbaugh Radio Show after calling Fluke a “slut” and a “prostitute” on the airwaves last week. On Monday, both Tax Resolution and internet giant AOL pulled their ads from his show, following the exits of ProFlowers, Legal Zoom and Citrix Systems over the weekend.”

Rusty knows all about sluts

“”At AOL one of our core values is that we act with integrity. We have monitored the unfolding events and have determined that Mr. Limbaugh’s comments are not in line with our values,” the web company wrote on its Facebook page. “As a result we have made the decision to suspend advertising on The Rush Limbaugh Radio show.”
Tax Resolutions announced the move on Twitter, writing, “Thank you for your concerns. We have decided to join other advertisers and suspend our sponsorship of The Rush Limbaugh Show.”
On Friday, bedding companies Sleep Train and Sleep Number, as well as Quicken Loans and the Cleveland Cavaliers basketball team, pulled their advertising.
The exodus continues despite Limbaugh’s tepid apology, which he posted on his website on Saturday after continuing his assault on Thursday and Friday, when he said that Fluke was “having so much sex she can’t pay for it” and that women who want insurance plans to cover their birth control should post videos of themselves having sex online.
“For over 20 years, I have illustrated the absurd with absurdity, three hours a day, five days a week,” he wrote. “In this instance, I chose the wrong words in my analogy of the situation. I did not mean a personal attack on Ms. Fluke.”
Few were impressed with the apology, and GOP presidential contenders were brief and less-than-harsh in their criticism of the conservative tastemaker. Newt Gingrich was especially fierce with his words, blaming the media for making such a big deal out of Limbaugh’s comments.”

“I am astonished at the desperation of the elite media to avoid rising gas prices, to avoid the president’s apology to religious fanatics in Afghanistan, to avoid a trillion-dollar deficit, to avoid the longest period of unemployment since the Great Depression, and to suddenly decide that Rush Limbaugh is the great national crisis of this week,” he told David Gregory on Meet the Press.

“JULY 6–Rush Limbaugh was traveling with four other men–including the producers of the hit show “24”–when he was detained over a mislabeled bottle of Viagra found in his luggage during a Customs search, records show.
A Department of Homeland Security passenger manifest shows that Limbaugh and his four buddies flew from the Dominican Republic on a Gulfstream IV jet owned by Premiere Radio
Networks, which syndicates his radio program.
Limbaugh returned to Palm Beach, Florida on June 26 with Joel Surnow, “24”‘s co-creator and executive producer and Howard Gordon, another of the Fox hit’s executive producers (Hollywood agent Jeffrey Benson was also part of the Limbaugh quintet).
With all those guys in tow, it is unclear what the radio host needed with the 29 100mg Viagra pills listed on a seized property receipt.
The passenger manifest was among several documents released today by the Palm Beach County State’s Attorney in response to a TSG open records request. Included in the material released was a copy of the handwritten statement Limbaugh provided investigators after he was detained upon the discovery of the impotency drug.
In that statement, Limbaugh claimed that the drug had been prescribed in his doctor’s name “to protect my privacy, given the potential embarrassing nature of Viagra.”
An affidavit sworn three days later by Limbaugh was also released. In that document, Limbaugh explains that the Viagra “was intended for my exclusive use” and that the drug had been prescribed in the name of his drug treatment doctor, Steven Strumwasser.”

One must be careful about about those Sex Vacations.

“Rush Limbaugh could see a deal with prosecutors in a long-running prescription fraud case collapse after authorities found a bottle of Viagra in his bag at Palm Beach International Airport. The prescription was not in his name.
Limbaugh was detained for more than three hours Monday at the airport after returning from a vacation in the Dominican Republic. Customs officials found the Viagra in his luggage but his name was not on the prescription, said Paul Miller, a spokesman for the Palm Beach County Sheriff’s Office.

That’s hardly specific to the Dominican Republic. Plug “adult travel” into a search engine and you’ll find dozens of membership-based sites where men around the world swap information on prostitutes, brothels and the price of oral sex in Brazil or Cuba.
The pricing schemes vary, but the content is the same. It’s a war of sex-oriented bragging: Members send in their R-rated travel reports in which they boast about the number of women they’ve “nailed,” including naked photographs of their conquests. They share tips and warnings, such as this post from a tourist who visited Boca Chica, a beachside town in southern Dominican Republic:
“If you go there, beware of a girl named Caroline. Bad, bad news: underage, pregnant and on drugs….”

Was his name “Caroline”?

“Prostitution is illegal in the Dominican Republic and the age of sexual consent is 18, but child prostitution is a visible and growing phenomenon. The UNICEF report on the problem estimates that there are now at least 25,000 children involved in the sex trade in the Dominican Republic, of whom 63% are girls (UNICEF, 1994). Though there is, and has always been, some local demand for child prostitutes, it is tourism that has fuelled the rapid growth of this market for children bodies.”

One must take care when dealing with children.

“As Melissa noted earlier in PEEK, from a CBS story: “Rush Limbaugh was detained for more than three hours Monday at Palm Beach International Airport after authorities said they found a bottle of Viagra in his possession without a prescription.”
He was reportedly returning from the Dominican Republic at the time which, as Terrance Heath notes, leaves a big, gaping hole in the story.
What was Rush doing in the Dominican Republic? Why was he returning from a country known for its thriving sex trade, with a bottle of Viagra that didn’t have his name on it?
From a 2001 Wired.com article:
the Dominican Republic is one of the biggest sex tourism destinations in the world, thanks in part to Internet sites that extol the country as a “single man’s paradise.”
…
Among banner ads for Viagra, members can shuffle through pictures of dull-eyed prostitutes engaged in flagrante delicto with the members/amateur pornographers.
Is it fair to go after Limbaugh for his woes? Of course, just as it’s fair game to out gay politicians who support bigoted policy toward gays.
Limbaugh inveighs against medical marijuana users regularly, making him a WORLD CLASS HYPOCRITE.
But I like Terrance’s alliterative aspersions:
These are not nice questions, which is why most people wonâ€™t ask them. But Rush is not a nice guy. And when a pundit whose party pokes its noses into people’s private affairs as a matter of policy is caught pocketing pills to pump up his penis, on his way back from a country plenteous with prostitutesâ€¦
Well pardon me if I’m compelled to prod and ponder why this public personality required a prescription for his penis in that place, and where he put it while he was there.”

Watch where you place that penis — right Tennessee?

“Rush Limbaugh and prosecutors in the long-running prescription fraud case against him have reached a deal calling for the only charge against the conservative commentator to be dropped without a guilty plea if he continues treatment, his attorney said Friday.

Limbaugh turned himself in to authorities on a warrant filed Friday charging him with fraud to conceal information to obtain prescriptions, said Teri Barbera, a spokeswoman for the Palm Beach County Jail. He and his attorney Roy Black left about an hour later, after Limbaugh was photographed and fingerprinted and he posted $3,000 bail, Barbera said.

Prosecutors’ three-year investigation of Limbaugh began after he publicly acknowledged being addicted to pain medication and entered a rehabilitation program. They accused Limbaugh of “doctor shopping,” or illegally deceiving multiple doctors to receive overlapping prescriptions, after learning that he received about 2,000 painkillers, prescribed by four doctors in six months, at a pharmacy near his Palm Beach mansion.

Limbaugh, who pleaded not guilty Friday, has steadfastly denied doctor shopping. Black said the charge will be dismissed in 18 months if Limbaugh complies with court guidelines.

“Mr. Limbaugh and I have maintained from the start that there was no doctor shopping, and we continue to hold this position,” Black said in an e-mailed statement.

Limbaugh spokesman Tony Knight said the commentator signed the agreement Thursday, and that it called for him to enter the not guilty plea. “It’s not in the system moving toward trial. It was all a formality. It’s a concluded deal,” Knight said.”

“As a primary condition of the dismissal, Limbaugh must continue to seek treatment from the doctor he has seen for the past 2½ years, Black said. Among other provisions, he also has agreed to pay the state $30,000 to defray its investigative costs, Black said.

Prosecutors began investigating Limbaugh in 2003 after the National Enquirer reported his housekeeper’s allegations that he had abused OxyContin and other painkillers. He soon took a five-week leave from his radio show to enter a rehabilitation program and acknowledged he had become addicted to pain medication. He blamed it on severe back pain.

Before his own problems became public, Limbaugh had decried drug use and abuse and mocked President Clinton for saying he had not inhaled when he tried marijuana. He often made the case that drug crimes deserve punishment.

Prosecutors seized Limbaugh’s medical records after learning about the painkillers he had received at the Palm Beach pharmacy. The investigation was held up as the prosecutors and Black battled in court over whether the records were properly seized.

Limbaugh reported five years ago that he had lost most of his hearing because of an autoimmune inner-ear disease. He had surgery to have an electronic device placed in his skull to restore his hearing. But research shows that abusing opiate-based painkillers also can cause profound hearing loss.

“Over the past several years I have tried to break my dependence on pain pills and, in fact, twice checked myself into medical facilities in an attempt to do so,” Limbaugh said at the time. “I have recently agreed with my physician about the next steps.”

Watch that “next step” Rusty. It could be a killer.

Nico (as if you didn’t know) will sing us out.