In today’s Pravda, Robert A. Burt “a law professor at Yale University and the author of In the Whirlwind: God and Humanity in Conflict” does his darndest to defend The Big Invisible B-Polar Daddy Who Lives in The Sky in a op-ed ominously entitled “Should God be obeyed? Should the government?”

IOW he sees no separation between Church and State. Not an auspicious beginning.

“Throughout the Bible, God repeatedly doubts humanity’s worth. We see these misgivings in the book of Genesis, when God decides to kill nearly all of humanity in a great flood because of our evil proclivities. Or when He destroys Sodom and Gomorrah because of their residents’ sinfulness. Or in Exodus, when God resolves to kill the Israelites, whom He has rescued from slavery in Egypt because of their idolatry of a golden calf, until Moses persuades Him otherwise.”

As for Sodom and Gomorrah, it was all about a refusal of hospitality. This was answered by The Invasion.

“The biblical narratives also record doubts on humanity’s side — doubts about the worth of obeying God and about his plans for us. By highlighting this aspect of humanity’s relationship with God, the Bible reveals itself in an unexpected light: as a guidebook for confronting authority — secular political authority as well as religious authority.
Try reading the Bible as if you didn’t know the endings to its stories. The book is filled with gripping accounts of people facing crises, with resolutions that are far from clear. When Abraham, in obedience to God’s command, binds his son, Isaac, on an altar and raises his knife over him, neither knows that the killing will be interrupted. When Jesus’s disciples learn of his death and are overwhelmed by grief and fear, they don’t know that He will return to them. When Jesus himself utters his last words from the cross — “My God, my God, why have you forsaken me?,” according to the Gospels of Mark and Matthew — He doesn’t know that God will welcome Him in Heaven.”

Well that’s bullshit. If Jesus IS God, then he knows everything. To state otherwise is mere pretense. Apparently Jesus was a Drama Queen.

“Whether we approach the Bible as believers in its truth or solely with an appreciation of its literary qualities, we cannot accurately understand the text if we overlook the deep doubts and fears of the characters, including their doubts about God’s wisdom. A close reading reveals many instances when human beings withhold allegiance from God — and seemingly with good reason.”

Fritz Lang explains it all for you.

“One obvious example is in the book of Job, in which God authorizes the infliction of suffering on an innocent man to prove to Satan that Job will be loyal to Him. Job responds, however, by cursing the day he was born and threatening suicide, which he imagines would somehow punish God for the injustice he is suffering. “Soon I’ll be lying in the earth,” Job says. “When you come looking for me, I’ll be gone.”

“There are other notable occasions. After Abraham is held back at the last moment from fulfilling God’s command to kill Isaac, he and God never speak again. Genesis does not proclaim this fact; it simply gives no record of any further communication between them, in contrast to the constant interactions between God and Abraham before this climactic event.
There is also no record of any further conversation between Abraham and Isaac. The implications are tantalizing: Isaac has lost faith in his father’s paternal benevolence, and in parallel, Abraham has lost faith in God’s beneficence toward him after being subjected to this horrific test.”

God is such a Joker! 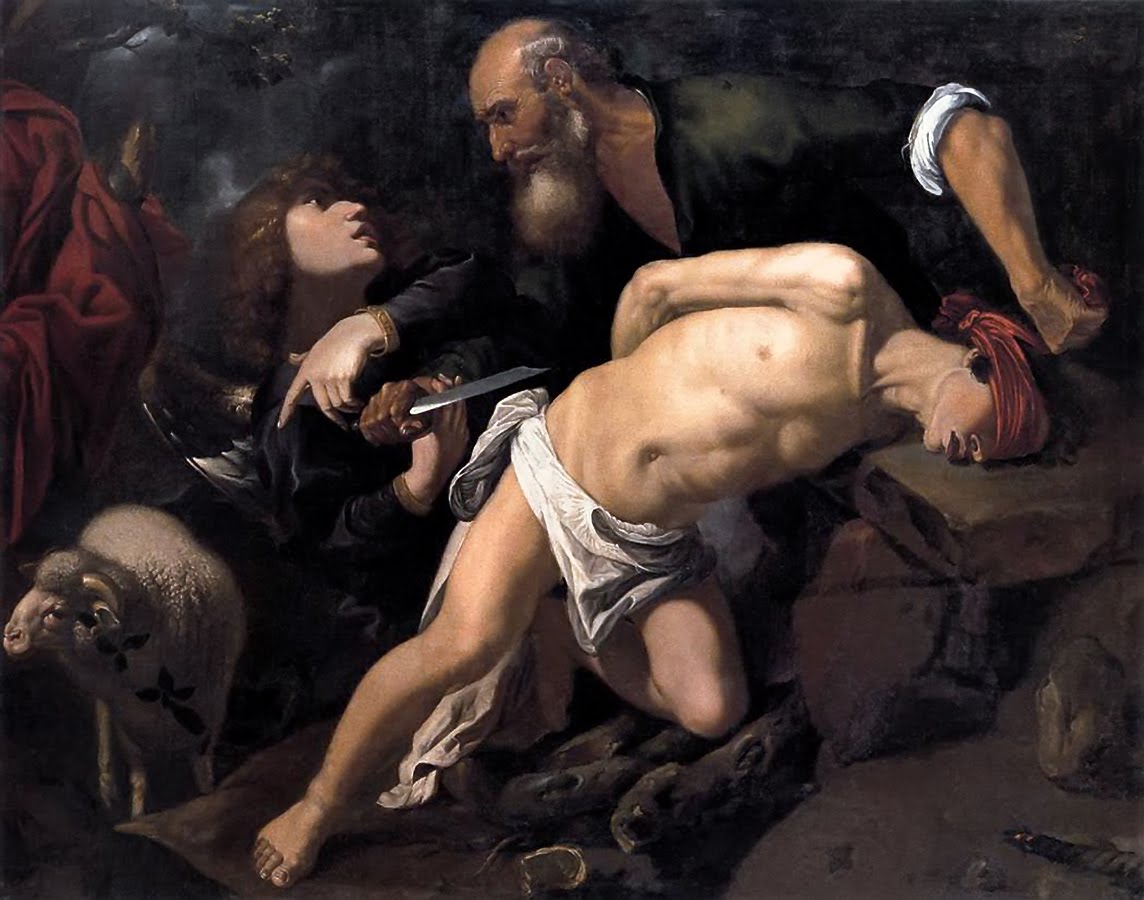 (Rather homoerotic depiction of the tale doncha think?)

“Similarly, in the Christian Bible, Jesus’s disciples abandon Him as He faces death. Peter denies knowing Jesus when challenged in the high priest’s courtyard, while other disciples flee after his arrest. Their actions might have been motivated by fear and self-preservation. But it is also plausible from the narrative that the disciples broke off their relationship with Jesus because they felt abandoned by his refusal to use his powers to resist his crucifixion.”

“These stories — and many others involving Cain, Noah, Jacob and Moses — underscore a question that quietly pervades the Hebrew and Christian Bibles: Does God deserve humanity’s obedience, its love?
God has overwhelming power that He can use to destroy us. This may be a reason for believers to fear Him, but it hardly establishes legitimate authority or provides a reason to love Him.
Is God worthy of humanity’s allegiance because He created us? Abusive or neglectful human parents don’t deserve their injured children’s loyalty. Is there not good reason to expect more from God — to expect nurturing and protection?”

Paul Rudnick (via Nathan Lane) Explains It All For You

“But would accepting some standard of justice — for example, that He keep his promises to humanity — limit God? In the biblical narratives, this possibility is raised but never resolved. When God appears to Job in the whirlwind, He seems to mock Job for daring to see any limitation on his power. But later, God seems to acknowledge the truth of Job’s claim by restoring his previous fortune twice over. God thus paid double indemnity, in effect, pleading guilty in Job’s lawsuit against Him for wrongful conduct.”

Who did Job get for a lawyer? Jacoby & Myers?

“The truly stunning element in the Hebrew and Christian Bibles is not that they answer the question of the legitimacy of God’s authority over humanity, but that they raise the matter at all. If we overlook the persistent accusations of betrayal and abandonment — both by God against humanity and by humanity against God — we not only miss a central contested issue in the narratives, we also miss the lessons they teach about secular political authority.”

“Even today, secular authorities often demand acquiescence simply based on their say-so. It is a president waging war without congressional approval or indefinitely imprisoning alleged terrorists without permitting civil court review; it is a Supreme Court overturning laws that regulate campaign financing or, as now appears likely, that provide access to health care for all. In these instances, the imperial president or the imperious Supreme Court mimics one style of God’s authority in the biblical narratives, one based on command and coercion.”

“There is, however, another style of divine authority that can be seen in the Hebrew and Christian Bibles. It is bilateral rather than unilateral, based on mutual recognition and soliciting consent rather than commanding obedience. This style can be seen with particular clarity when God offers a special covenant to the children of Israel in the Sinai desert after rescuing them from Egyptian slavery. He does not command the Israelites to accept a special relationship with Him. He does not threaten punishment if they do not consent.
These two forms of divine authority — unilateral and bilateral — recur throughout the biblical texts. But both sides clearly seem to prefer the bilateral relationship, one based on mutual regard and good faith.
Whenever God veers toward a command approach, humanity pushes back: Abraham’s withdrawal from God, Job’s protests, Moses’s reminder to God of his past promises to Abraham, Isaac and Israel that their descendants would be a great nation.”

“Of course, no one has effective coercive authority over God. But in the biblical texts, God is continually reminded — by Abraham, Moses, Job and Jesus — that coercion cannot pry loose what He truly wants from us: not just obedience but loyalty, allegiance and love.
It is also hard to exercise coercive authority over our secular leaders — the president during his term in office or life-tenured Supreme Court justices. Political leaders may want our love (or at least our votes), but it may be that, unlike God, they are content to settle for our sullen, enforced obedience.
Still, it remains in our power to persistently and insistently remind them that a different kind of relationship — a mutually attentive and bilateral one — is more desirable. Even God seems to prefer it.”