Fait Diver: Hommage A Will Lee

Can Your Heart Stand The Shocking Facts?

“CHEYENNE, Wyo. — Former vice president Dick Cheney walked onstage without any assistance Saturday and spoke for an hour and 15 minutes without seeming to tire in his first public engagement since he underwent a heart transplant three weeks ago.”

“He sat in a plush chair throughout the long chat with daughter Liz Cheney,”

“but looked better, even, than during recent appearances in which he has been gaunt and used a cane.
Cheney even threw in a couple of political plugs amid much reminiscing at the Wyoming Republican Party state convention in Cheyenne.
He said presumptive Republican presidential nominee Mitt Romney is going to do a “whale of a job.”

“He said it’s never been more important than now to defeat a sitting president, and the Republican Party should unite behind Romney.
“He has been an unmitigated disaster to the country,” Cheney said of President Obama.”

“Cheney’s heart transplant in Virginia on March 24 had forced the cancellation of his trip to the state party convention, but he got last-minute medical clearance to go.” 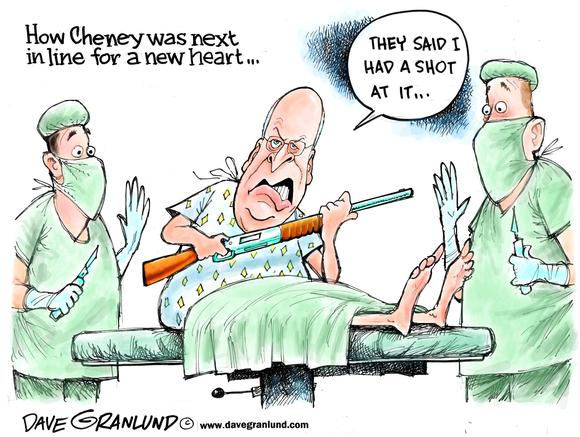 “He owed a “huge debt” to the unknown donor of his new heart, Cheney said, and to medical technology. He did not take the opportunity to weigh in on health-care politics.”

“I was amazed he was able to say so much over the whole course of an hour,” said one delegate to the convention, Helen Bishop of Moran in Jackson Hole. “I thought it would be a really brief, ‘Hi.’ ”

“Nearly all of the talk traced the more than 40 years of Cheney’s political career, including the controversial waterboarding and other interrogation practices the Bush administration employed to extract information from terrorism suspects.
“It produced a wealth of information. Don’t let anybody tell you the enhanced interrogation program didn’t work. It did,” he said to the loudest applause of his visit.”

Yes, let’s have a Standing O for —