“One could forgive viewers if they walked away confused after watching CNN’s early coverage of the Supreme Court’s health decision.

The network, itself, was confused.”

“Within minutes after the decision was announced, CNN was hitting the airwaves with four different versions of what the ruling said.

First, the network reported the justices had “killed” the individual mandate provision of the law — perhaps its most controversial aspect.

Then, CNN reported the law “may have been upheld.”

CNN switched its story once again, saying the individual mandate was “partly upheld, partly struck down.”

As in “slightly pregnant”

“Finally, 20 minutes after the ruling was announced, the network settled on what everyone else was reporting: That President Barack Obama’s landmark health care law had been upheld.”

As he had always said it would be.

Of course whatever President Obama says is rigorously ignored by the “Mainstream Media” which persists in treating him like a worthless nigger.

“In addition to hitting the airwaves, the network also sent out two breaking news alerts.

• 10:09: The Supreme Court has struck down the individual mandate for health care – the legislation that requires all to have health insurance.

• 10:18: Correction: The Supreme Court backs all parts of President Obama’s signature health care law, including the individual mandate that requires all to have health insurance.

Now, having covered courts for several years, I understand lengthy legal opinions are difficult to analyze quickly. And give CNN credit, once they realized the error, they quickly corrected it. But in such cases, it’s best to wait and read the entire opinion before publishing.

The New York Times seemed to take this approach, tweeting: “The Supreme Court has ruled on President Obama’s health-care overhaul, and Times reporters and editors are analyzing the decision. Once we are comfortable with its basic meaning, you can expect a torrent of coverage.”

Here’s the full text of the ruling.

And here’s what the World’s Worst Newspaper has to say about it.

“The Supreme Court on Thursday largely let stand President Obama’s health care overhaul, in a mixed ruling that court observers were rushing to analyze.
The decision was a striking victory for the president and Congressional Democrats, with a majority of the court, including the conservative chief justice, John G. Roberts Jr., affirming the central legislative pillar of Mr. Obama’s term.”

And here he is with his whole family. “The justices voted 5 to 4 to uphold the law’s individual mandate provision and thus the entire law, as authorized by Congress’ power to levy taxes.
Many observers called the case the most significant before the court since at least the 2000 Bush v. Gore ruling, which decided a presidential election. In addition to the political reverberations, the case helps set the rules for one of the largest and fastest-growing sectors of the economy, one that affects nearly everyone from cradle to grave.
The decision did significantly restrict one major portion of the law: the expansion of Medicaid, the government health-insurance program for low-income and sick people. The ruling gives states some flexibility not to expand their Medicaid programs, without paying the same financial penalties that the law called for.”

Look forward to updates in which the Republican Party explains why Medicare must be eliminated because it’s “Obamacare.”

As those of us who follow politics closely know “Obamacare” is the sequel to “Hillarycare.”

That’s because “care” is a dirty word once it’s attached to a woman or a nigger.

“The debate over health care remains far from over, with Republicans vowing to carry on their fight against the law, which they see as an unaffordable infringement on the rights of individuals. The presumptive Republican presidential nominee, Mitt Romney, has promised to undo it if elected.”

“But the court ruling is a crucial victory for the law that will allow its introduction to continue in the coming years. Passed in 2010, the law is intended to end the United States’ status as the only rich country with large numbers of uninsured people, by expanding both the private market and Medicaid.”

Wasn’t there a movie about this?

“The key provision that 26 states opposing the law had challenged – known as the individual mandate – requires virtually all citizens to buy health insurance meeting minimum federal standards or to pay a fine if they refuse.
Many conservatives considered the mandate unconstitutional, arguing that if the federal government could compel people to buy health insurance, it could compel them to buy almost anything, with broccoli becoming the central example in court arguments.
It remained unclear whether the court officially upheld the mandate or chose a more technical path that effectively allowed it to stand. “

who complains about broccoli as if it were the edible embodiment of his arch enemy President Obama.

“The mandate’s advocates said it was necessary to ensure that not only sick people but also healthy individuals would sign up for coverage, keeping insurance premiums more affordable. The law offers subsidies to poorer and middle-class households, varying with their incomes. It also provides subsidies to some businesses for insuring their workers.
The law requires states to expand Medicaid coverage for poor and nearly poor households. In all, tens of millions of people are expected to gain insurance from the law, according to the Congressional Budget Office, as part of a march toward universal coverage, a goal that has eluded legislators and presidents – including Franklin Delano Roosevelt, Harry S. Truman, Lyndon B. Johnson, Richard M. Nixon and Bill Clinton – for generations.”

All of whom had/have complete government-paid-for health care coverage as do all members of Congress, the Supremes and their families.

“The decision came on the last day of the term, which the justices extended by three days to deal with the crush of major issues. On Monday, the court delivered a mixed ruling on an Arizona law intended to crack down on illegal immigrants, which the Obama administration opposed.
Under Chief Justice Roberts, the court has delivered a series of major victories to conservatives, including the Citizens United campaign finance decision, which on Monday it declined to reconsider. In next year’s term, it could take up other major issues, including affirmative action, same-sex marriage and the Voting Rights Act.
The health care ruling came three months after an extraordinary series of oral arguments in which the differences on the bench, if not the ultimate outcome, were disclosed in sharp relief.
Until those arguments, many observers – within the White House and beyond – had seen the law as likely to survive a legal challenge that even many Republicans once viewed as a long shot. But the skeptical questioning of a majority of the justices – and Justice Kennedy in particular – called that view seriously into doubt. “

But isn’t Justice Kennedy the key “liberal” member of the court? 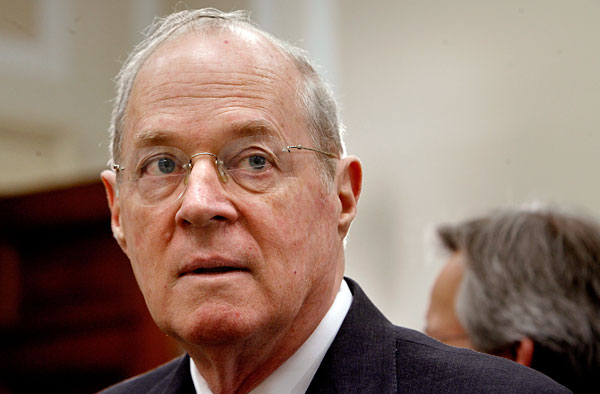 That’s what the “Mainstream Media” keep telling us. But as Kennedy’s vote shows they’re a pack of incompetent fools.

“Rulings by appeals courts had split on the question, with two upholding the law and one striking down the mandate. A fourth appeals court deferred consideration of the law until 2015, reasoning that the courts lacked jurisdiction until the first penalties enforcing the mandate became due.
Although there were some exceptions, in the lower courts most judges appointed by Democrats voted to uphold the law, while most appointed by Republicans voted to reject at least part of it.”

Clearly the Fat Lady has yet to sing on Health Care.

But here’s a non-fat lady — the fabulous Pamela Myers — instead.