“In a video posted on YouTube, Brown’s staffers are seen holding campaign signs near the Erie Pub, chanting and making tomahawk chops, presumably in reference to Elizabeth Warren’s claims of Cherokee heritage.
Brown’s Deputy Chief of Staff Greg Casey and Constituent Service Counsel Jack Richard, State Director Jerry McDermott, special assistant Jennifer Franks and GOP operative Brad Garrett are pictured in the video, NewsCenter 5’s Janet Wu confirmed.
“It is certainly something that I don’t condone,” said Brown when asked about the video. “The real offense is that (Warren) said she was white and then checked the box saying she is Native American, and then she changed her profile in the law directory once she made her tenure.”

A woman of distant Cherokee heritage

is accused of “checking the wrong box” ? What is this? Act One of Showboat ? Or maybe the finale.

Forget MGM’s “Heavy Egyptian” Make-Up, it’s surely within the realm of possibility that “Honest Av” (as Robert Mitchum called her) had ” a touch of the tarbrush.”

And didn’t Scott Brown check the wrong box when he failed to list as his profession “Cosmo Centerford”? 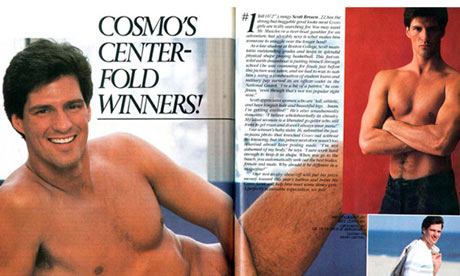 Perchance that’s why he’s complaining about Warren’s Native American bona fides, declaring “As you can see she’s not.”

Maybe Warren should have taken her cue from another MGM star.

Sing Us Out Judy!