Fait Diver: Singin’ in the Rain

“Most Americans have never heard of the National Response Coordination Center, but they’re lucky it exists on days of lethal winds and flood tides. The center is the war room of the Federal Emergency Management Agency, where officials gather to decide where rescuers should go, where drinking water should be shipped, and how to assist hospitals that have to evacuate.

Disaster coordination is one of the most vital functions of “big government,” which is why Mitt Romney wants to eliminate it. At a Republican primary debate last year, Mr. Romney was asked whether emergency management was a function that should be returned to the states. He not only agreed, he went further.
“Absolutely,” he said. “Every time you have an occasion to take something from the federal government and send it back to the states, that’s the right direction. And if you can go even further and send it back to the private sector, that’s even better.” Mr. Romney not only believes that states acting independently can handle the response to a vast East Coast storm better than Washington, but that profit-making companies can do an even better job. He said it was “immoral” for the federal government to do all these things if it means increasing the debt.
It’s an absurd notion, but it’s fully in line with decades of Republican resistance to federal emergency planning. FEMA, created by President Jimmy Carter, was elevated to cabinet rank in the Bill Clinton administration, but was then demoted by President George W. Bush, who neglected it, subsumed it into the Department of Homeland Security, and placed it in the control of political hacks. The disaster of Hurricane Katrina was just waiting to happen.
The agency was put back in working order by President Obama, but ideology still blinds Republicans to its value. Many don’t like the idea of free aid for poor people, or they think people should pay for their bad decisions, which this week includes living on the East Coast. Over the last two years, Congressional Republicans have forced a 43 percent reduction in the primary FEMA grants that pay for disaster preparedness. Representatives Paul Ryan, Eric Cantor and other House Republicans have repeatedly tried to refuse FEMA’s budget requests when disasters are more expensive than predicted, or have demanded that other valuable programs be cut to pay for them. The Ryan budget, which Mr. Romney praised as “an excellent piece of work,” would result in severe cutbacks to the agency, as would the Republican-instigated sequester, which would cut disaster relief by 8.2 percent on top of earlier reductions. 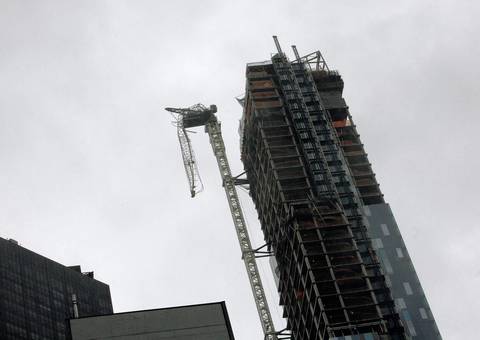 Does Mr. Romney really believe that financially strapped states would do a better job than a properly functioning federal agency? Who would make decisions about where to send federal aid? Or perhaps there would be no federal aid, and every state would bear the burden of billions of dollars in damages. After Mr. Romney’s 2011 remarks recirculated on Monday, his nervous campaign announced that he does not want to abolish FEMA, though he still believes states should be in charge of emergency management. Those in Hurricane Sandy’s path are fortunate that, for now, that ideology has not replaced sound policy”

Yes, even the editorial board of The World’s Worst Newspaperis wise to Mittens.

AND NOW THE FLIP-FLOP!

“DAVENPORT, Iowa—As Hurricane Sandy bears down on the East Coast, Mitt Romney’s campaign is pushing back against suggestions that he wants to abolish the Federal Emergency Management Agency—insisting that he would simply prefer to see states take a greater role in disaster relief.
At a GOP primary debate in June 2011, Romney, when asked about FEMA’s budget woes and how he would deal with it, had said, “Every time you have an occasion to take something from the federal government and send it back to the states, that’s the right direction. And if you can go even further and send it back to the private sector, that’s even better.”
During that debate, the moderator, CNN’s John King, had gone on to ask if that included “disaster relief.” Romney suggested it did.
The Center for American Progress, a liberal group, called attention to Romney’s remarks in an email to reporters on Sunday.
Asked for clarification today, Romney spokeswoman Amanda Henneberg said the GOP nominee wasn’t implying he would get rid of FEMA, but rather that he simply wants states to play a greater role in disaster response.
“Gov. Romney believes that states should be in charge of emergency management in responding to storms and other natural disasters in their jurisdictions,” Henneberg said. “As the first responders, states are in the best position to aid affected individuals and communities, and to direct resources and assistance to where they are needed most. This includes help from the federal government and FEMA.”
Romney has proposed a budget that includes across-the-board cuts on federal programs, with the exception of defense and entitlement programs, as a way of curbing the growing federal deficit. But he has not said specifically where those cuts would be. Asked if FEMA’s budget could be on the list for potential cuts, Henneberg did not comment.
Romney has publicly supported a House GOP budget bill drafted by his running mate, Rep. Paul Ryan, that called for greater efficiency in federal disaster relief spending.
The debate over FEMA funding could be revived in coming days amid predictions that Hurricane Sandy could cause massive power outage and damage in its path.”

Well that’s just a “Spokeswoman.” I’m sure when speaking for himself Mitten is more. . . .nuanced

Take it away Ray and June!