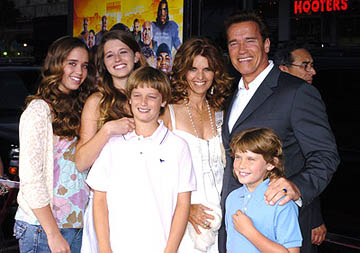 “You always hurt the one you love.” Right Arnold?

“SACRAMENTO, Calif. — Arnold Schwarzenegger says his lifelong penchant for secrecy and ability to put his emotions “on deep freeze” led him to keep many secrets from his wife Maria Shriver, eventually causing the dissolution of their marriage when he was forced to admit he fathered a child with the family’s housekeeper years earlier.
Throughout their strained 25-year marriage, Schwarzenegger says he did not want to tell Shriver about crucial life decisions such as major heart surgery and running for California governor because he feared she would overreact and tell her well-connected family and friends.”

“In his new autobiography, “Total Recall: My Unbelievably True Life Story,” and in an interview airing Sunday on “60 Minutes,” the former California governor acknowledges that his inability to be honest with people has hurt those closest to him.
“That’s the way I handle things. And it always has worked. But, I mean it does not – it’s not the best thing for people around me because I sometimes – some information I just keep to myself,” Schwarzenegger tells reporter Lesley Stahl on “60 Minutes.”

The former Mr. Universe traces his detachment to his bodybuilding days, where he says emotions make athletes lose.
“So I became an expert in living in denial,” says the Hollywood action star and former governor.

He should have called it Total Denial.

“Schwarzenegger praises Shriver throughout the book as a partner and friend who was essential to his success, but also admits to keeping her in the dark about many career decisions. Shriver filed for divorce in July.
Although he had been toying with the idea of running for governor for more than a year, Schwarzenegger waited until just days before the filing deadline for the 2003 recall to discuss it with Shriver, writing in the book that he “didn’t want endless conversation about it at home.”
Shriver opposed the idea, but was persuaded to soften her stance by her mother, Eunice Shriver, who told her to support her husband’s ambitions, or he might resent her for the rest of his life. Despite that struggle, he also didn’t inform her when he decided to seek a second term, writing that she had to read about it in the newspaper.”

That run for governor was engineered by this woman Can we say “Conflict of Interest” boys and girls?

“Total Recall” will officially be published Monday. The Associated Press purchased an early copy.
But Schwarzenegger’s biggest secret, the child he had with the family’s housekeeper, became tabloid news last year after he left office. Shriver confronted him during a January 2011 counseling session and he finally acknowledged the boy, Joseph, was his. Schwarzenegger says he kept the secret from his wife for years because he was worried “it would get out.”
He tells Stahl he never even had a conversation with the housekeeper, Mildred Baena, about the son. Instead, after he began noticing the boy’s strong resemblance to him, around age 8, he just began giving Baena extra money.”

No question that she and the boy needed it.

“I kind of put it away and just said to myself, `OK, I’m going to put this away. I’m going to fulfill my responsibilities,’” he tells Stahl.
He declined to say whether he has a relationship with the child, who is now about 15, and he said he didn’t want to go into any more details about his relationship with Baena because he’s already caused Shriver and their four children enough pain.
“I don’t want to reawaken and kind of talk about it because it’s not going to help them. And I just want to protect them as much as I can,” he says.
There were other deceptions, too, including a “hot affair” with actress Brigitte Nielsen while filming the 1985 film “Red Sonja,” when he and Shriver were living together. He admits to other affairs, but tells Stahl they are “something that’s obviously between Maria and me.”

“Schwarzenegger says in the interview that his marriage and his family were the most important things in his life, but he caused them tremendous pain.
“So the thing that really meant the most to me kind of fell apart because of my doing,” he says in the “60 Minutes” interview. “That is something that I will always look back and say, `How could you have done that?’”

It could be neurological, Arnold. Perhaps you should consult Dr. Oliver Sacks. And perhaps not. We all remember those South American “businessmen” who backed your bodybuilding career, don’t we dear?

Grace Jones, one of the attendees at your wedding to Maria, will sing us out.