As you can see Fran is scarcely a newly-minted fly-by-night “phenom.”

“Lebowitz was born and raised in Morristown, New Jersey, in an “observant” Jewish family.
After being expelled from high school and receiving a GED, Lebowitz worked many odd jobs before being hired by Andy Warhol as a columnist for Interview. This was followed by a stint at Mademoiselle. Her first book was a collection of essays titled Metropolitan Life, released in 1978,

followed by Social Studies in 1981, 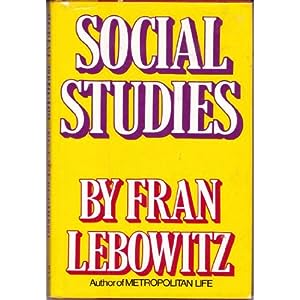 both of which are collected (with a new introductory essay) in The Fran Lebowitz Reader.

She has been famous, in part, for Exterior Signs of Wealth, a long-overdue, unfinished novel, purportedly about rich people who want to be artists, and artists who want to be rich”

Clearly its inspiration was the many years she spent as a professional house guest for the likes of Barry,

and the other Gay Mafia capi.

“She also made several appearances on Late Night with David Letterman. She has made recurring appearances as Judge Janice Goldberg on the television drama Law & Order.
Lebowitz, herself a heavy smoker, is known for her advocacy of smokers’ rights.
In September 2007, Fran Lebowitz was named one of the year’s most stylish women in Vanity Fair’s 68th Annual International Best-Dressed List, and she is known to sport tailored suits by the Savile Row tailor Anderson & Sheppard. On November 17, 2010, Fran made a return appearance on Late Show with David Letterman after a 16-year absence. She discussed her years-long writer’s block, which she jokingly referred to as “writer’s blockade”. On November 22, 2010, HBO debuted Public Speaking, a documentary about Lebowitz by Martin Scorsese containing interviews and clips from speaking engagements.” Fran has been glibly compared to Dorothy Parker. They have precious little in common. HERE’S the Dorothy that counts with Fran.

DoDo Mae Doom, aka. “The Black Barbarella” was famous for speaking casually in the style a Flaubert or Mallarme would agonize for years on end to get down on paper. Fran is clearly following her example, writing on air as it were. And she’s quite good at it.

Take it away Ethel!