Pastoral Letter From An Unknown Woman

Oh Miss Thing how you DO go on!

“Bishop Joseph Tyson today published a pastoral letter titled Marriage and Referendum 74 with a clear message: Because it is the constant tradition of the Catholic Church, based on scripture, that marriage is a covenant between a man and a woman, Referendum 74 should be rejected.”

Thus entering the poltical arena in the most formal and absolute way possible, which of course demands that the church be TAXED TO THE MAX!

In the letter, which was to be read at all Saturday Vigil Masses and Sunday Masses in the Diocese of Yakima October 6-7, Bishop Tyson encourages parishioners to look beyond the defeat of R-74, which would redefine marriage in Washington state as a contract between two persons. “When it comes to following the words of Jesus in our Sunday Gospel, we need to think big,” the pastoral letter states. “We need to find ways to replant our Church’s moral proposal for human happiness that flows from marriage as the union of one man and one woman.”

As opposed to one priest and as many boys as he can fuck. 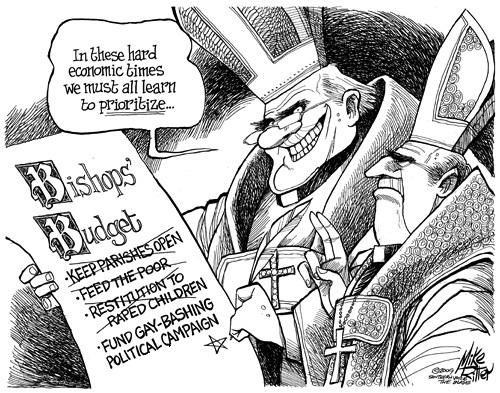 Reflecting on a passage from the Gospel of Mark, one of the scriptures already scheduled to be read at the Masses, Bishop Tyson echoes the words of Jesus: “… from the beginning of creation, God made them male and female. For this reason a man shall leave his father and mother and be joined to his wife, and the two shall become one flesh…”

He notes in the letter that Jesus rooted his teaching not in the Jewish culture of his day, in which women had few rights, but to the beginning of creation: an understanding of marriage based on natural law, discernible by “people of every faith, and of no faith at all.”

Lies, Priest! Jesus was a very traditional Rabbi. Women had no rights and Jesus had no interest in rocking the boat.

The proposed law, Bishop Tyson states, upends this traditional understanding of marriage, turning it into a “genderless contract” that will have negative consequences for religious liberty, and for children. “There is something uniquely special about a man and a woman coming together in wedlock, and this union has an essential public significance,” Bishop Tyson states.
“The most obvious is the fact that every child has a mother and a father, and marriage is the only institution that meets a child’s right, as far as possible, to know, love and be raised by his or her mother and father together, in an intact home.”

Bishop Tyson acknowledges that R-74 has popular appeal. “Why do we settle for this kind of law? I think out of fear. There’s the plain misunderstanding of the meaning of marriage, which I think has been a significant factor in our cultural debate.
“But some of us have friends and family with same-sex attractions,” he said. “And we are aware of a painful pattern of unjust discrimination and personal reject. We love them. We do not want to lose them. We do not want them to feel rejected again. Yet, because we support marriage’s unique meaning does not mean we love any of our family any less.”

The Bishop noted that the R-74 debate occurs at a time when the Catholic Church is embarking on a “Year of Faith,” calling for a new effort to spread the Gospel of Jesus Christ.
In his letter he asks parishioners to “consider what kind of picture of marriage you desire to give the next generation. If you and I don’t uphold marriage as the union of a man and a woman, who will? If we are intimidated by those supporting marriage redefinition who picket and threaten donation boycotts of our charity and our ministry, then who will proclaim the true meaning of marriage?”

The courts of course. Marriage is legal contract instituted and recognized by the state.

“This is the Church’s mission given to us by Christ. As bishop, I intend to clearly, fearlessly and boldly proclaim this message – not only for your consideration – but the consideration of everyone,” he said.
Bishop Tyson planned to deliver his message personally in a few parishes Saturday evening and Sunday in the Tri Cities, Yakima, and Moses Lake.

Nothing beats the personal touch.

Here’s the letter in full.

“We must also understand another tragic consequence. R-74 jeopardizes freedom rather than expands it. It endangers our religious liberty and the right of conscience. Once marriage is redefined as a genderless contract, it will become legally discriminatory for public and private institutions such as schools to promote the unique meaning of marriage, and to teach about the right of a child to be known, loved and raised by his or her own mother and father in a stable home. This law will challenge our right to educate about the unique value of children being raised by their own mothers and fathers. No institution or individual could propose that married mothers and fathers provide a singular benefit to children without being accused of discrimination. “

Translation: “THEY’LL GIVE YOUR CHILDREN TO THE FAGS AND DYKES AND YOU CAN’T GET THEM BACK!!!!!”

“This is not an idle concern. Recent attacks on churches, businesses and nonprofit organizations that express their conscientious objection to the redefinition of marriage underscore this danger. Those who uphold families based on the permanent, faithful relationship between a married man and woman as the best environment for raising children already have been accused of hate speech, and the right of religious institutions to freely practice their faith has been abridged. The acceptance of R-74 means that so-called same-sex “marriage” will replace real marriage – the union of a man and a woman – as the legal frame of reference for all public discourse. The terms “husband and wife” and “father and mother” will continue to recede as so-called gender-neutral terms overwhelm our public lexicon.” 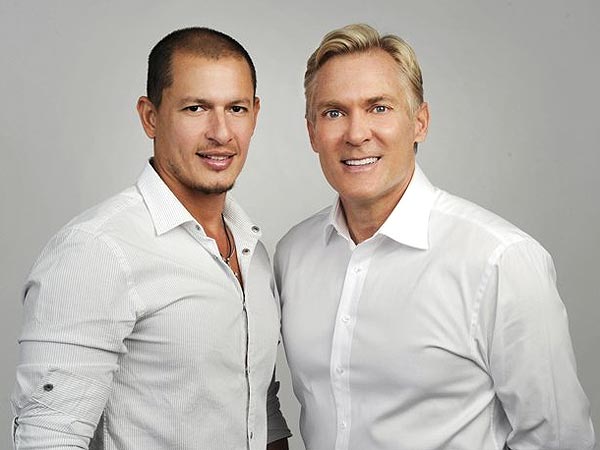 “Let us not allow ourselves or others to be fooled by false reasoning. Protecting the definition of marriage as the union of onemanandonewomandoesnotmakemarriage “discriminatory.” It recognizes marriage between one man and one woman to be unique – unique among all other kinds of human relationships. Although our surrounding popular culture may define human identity by the terms “gay” and “straight,” our Church has a deeper and more accurate understanding of human identity based on male and female – sexual difference. It is within this identity that each one of us is called as a son or daughter of God. It is also within this identity of the human person as male and female that the meaning of marriage is discovered. Marriage is founded on sexual difference and ordered toward the good of husband and wife and the procreation and rearing of children.”

And not just for LGBT. The Bishop is giving couples unable to concieve a swift sharp kick in the crotch.

But enough of tis blather. Let’s get to the heart of the matter.

The last note should of course go to Sondheim via the much-missed Madeline Kahn.