“NEW YORK (AP) — A conservative scholar behind a high-grossing documentary that condemns President Barack Obama is under investigation by the evangelical college he leads over a report he took a woman who is not his wife to an event on Christian values.”

And what better place for an adulterer and his paramor to go than a “Christian Values” event?

“The King’s College board announced the review on Tuesday, the day the conservative Christian newsmagazine WORLD reported event organizers had confronted Dinesh D’Souza about sharing a hotel room with a woman he introduced as his fiancee. D’Souza filed for divorce from his wife, Dixie D’Souza, a few days after the conference, California court records show.” 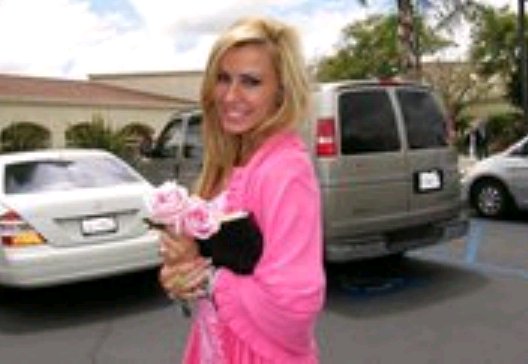 Yep, that’s her name. And while Dinesh may be dumping her she’s sure to be taken up by drag queens this Halloween, especially those who –

“The event, Truth for a New Generation, was held the weekend of Sept. 28 in South Carolina.
In a brief telephone interview with The Associated Press, Dinesh D’Souza, who became president of The King’s College in 2010, said he and his wife have been “living in a state of separation for two years.” He denied sharing the hotel room with the other woman.”

Did they have separate rooms? I’m sure the hotel in question can check its records. As for the “other woman,” Her name is Denise Odie Joseph II.

Here’s her blog. I’m sure it’s going to be getting a lot of traffic. Especially from the lawyers.

“Obviously, I wouldn’t have introduced her as my fiancee if I thought we were doing anything improper,” D’Souza said, adding they have called off their engagement.

“The college, which was located in the Empire State Building before moving this year to lower Manhattan, aims to shape young Christians as future leaders in all sectors of society.”

“D’Souza is a former policy analyst under President Ronald Reagan and a prolific author known most recently for his critical works on Obama. He directed the film “2016: Obama’s America,” based on his book “The Roots of Obama’s Rage.”
The film was condemned by many critics, including Newsday’s Rafer Guzman, who called it an “attempt at character assassination.” But it has become one of the most successful political documentaries ever released.”

Really now? His partner-in-ThoughtCrime-patrol at Dartmouth was the lovely Laura Ingraham — to whom he was brefly engaged. But I suspect her parents got a good look at him. For in the same Wiki item there’s THIS

“Dese boys be sayin’ that we be comin’ here to Dartmut an’ not takin’ the classics. You know, Homa, Shakesphere; but I hea’ dey all be co’d in da ground, six feet unda, and whatchu be askin’ us to learn from dem?” —From The Dartmouth Review under D’Souza.

“D’Souza is completely out of touch with the reality of discrimination that minorities face in the United States. In his controversial 1995 book The End of Racism, he argued that “Racism, which once used to be systematic, had now become episodic,” and that “…it no longer controlled the lives of blacks and other minorities.” He explains away the prejudice against Blacks and Latinos as being caused by “cultural factors,” not racial victimization.
In The End of Racism, D’Souza, among other things, argues that the parts of the Civil Rights Act pertaining to private companies should be repealed. D’Souza holds a fellowship at the American Enterprise Institute (AEI), a think tank which published the book. This caused two of AEI’s black fellows to resign their positions.”

“The King’s College board chairman, Andy Mills, has known about D’Souza’s marital troubles for at least two years, spokesman Mark DeMoss said.
“While our board had been aware of some of these details, we were not aware of others,” the board said in a statement.
The board said it held a conference call with D’Souza on Monday and plans to review the situation during its previously scheduled meetings on Wednesday and Thursday in New York.
“In the meantime,” it said, “be assured we take seriously our charge to teach a compelling worldview rooted in the Bible and expect all of our leaders to model Christian character and integrity in their public and private lives.”

Look like the Prada slipper’s on the other foot, Dinesh.

The Band will sing us out.

The Other Prada Slipper Hits The Fan

“Prominent conservative author and Obama critic Dinesh D’Souza has resigned from the from the presidency of The King’s College, an evangelical Christian liberal arts school based in Manhattan, the college’s board of trustees announced Thursday.
The sudden departure comes after days of controversy over accusations of marital infidelity against D’Souza, who reportedly attended a recent event on Christian values with a woman who was not his his wife of 20 years and shared a hotel room with her. (The story of D’Souza’s relationship to a woman, Denise Odie Joseph II, was first reported by WORLD magazine).
Andy Mills, chairman of the college’s board of trustees, made the announcement on Thursday afternoon to students, faculty and staff.
“God has a mighty future for Dinesh, but there are some things he has to go through first,” Mills said, according to the Empire State Tribune, a student newspaper at the college. “I have to admit, I got a bit over-enamored with him,” said Mills, who emphasized to students that much of the college’s funding does not come from D’Souza’s high-profile connections. Mills will take over as interim president, a position he has twice held before.
A statement from the board said that D’Souza “admitted difficulties in his marriage” and quoted D’Souza, who said his actions “have not been consistent with the standard of leadership required for the position of president at The King’s College, and have created a distraction that would make it difficult, if not impossible, to continue in my role without adversely affecting the students and school I have grown to love.”

Take it away Cole!