The Last of Mr. Blair 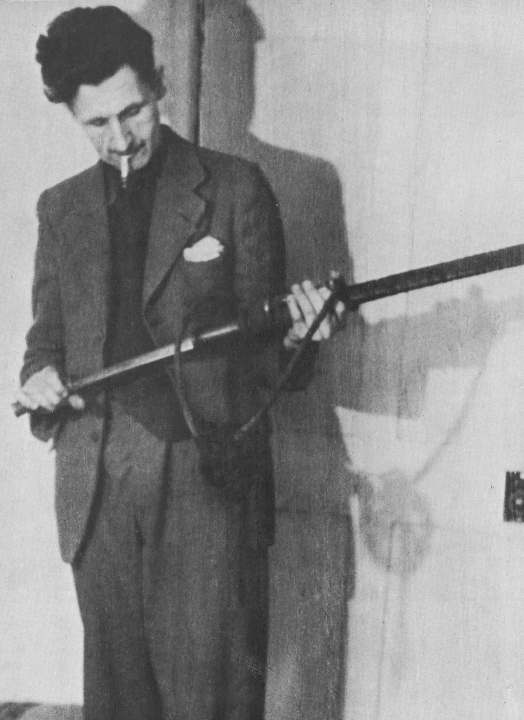 “the possibility that Diaries may reveal a new and improved Orwell—or a new and diminished one—can be easily dismissed. That’s the case whether you aligned yourself with Orwell’s celebrator and intellectual inheritor, Christopher Hitchens, who wrote the introduction for this edition, or that other recently departed leftist public intellectual, Alexander Cockburn, who likened Orwell to a “snitch” for informing on Communists (which he did).”

“Take, for example, the extended description of descending into the double blackness of the mines with “coal-cutters”—the finished account of which ends up in Wigan Pier. Orwell’s chronicle of miners quarrying and transporting coal deposits to the surface echoes Herman Melville’s dissertation on whale disassembly in Moby-Dick, and his prose glows lovingly on the miners as they perform their labors. “Above ground, in their thick ill-fitting clothes, they are ordinary-looking men, usually small and not at all impressive,” Orwell wrote. “Below, when you see them stripped, all, old and young, have splendid bodies, with every muscle defined and wonderfully small waists. I saw some miners going into their baths. As I thought, they are quite black from head to foot. So the ordinary miner, who has not access to a bath, must be black from the waist down six days a week at least.”

Such homoerotic heavy breathing has led to much in the way of what’s ever-so-politely referred to as “speculation” concerning Blair who had many women in his life and was quite disdainful of the same-sex oriented. On a site cleverly named “The Pursuers of George Orwell” one finds –

““Matthew Price reported in the Boston Globe that a certain “Jonathan Rose, a professor of history at Drew University,” described “1984” as “a kind of manifesto for gay liberation.” As Mr. Price very correctly pointed out, this was “a surprising contention, given Orwell’s ill-tempered remarks about homosexuals in his journalism.” Yet it seems even more bizarre when one considers that homosexuality makes no appearance whatever in the book.

Mr. Rose offered, as if it were some immense revelation, the comment, “Long before Foucault, and without reading Wilhelm Reich, Orwell seems to have grasped that sexual repression was the foundation — and not merely a byproduct of — totalitarianism.”Well, yes,”1984″ includes a Junior Anti-Sex League as a feature of control in Big Brother’s omniscient state, and describes encounters between the repressed Winston Smith and the highly sexed Julia, who views lovemaking as a form of rebellion. But this vitalism was not original to Orwell, and he did not need Reich to teach it to him. The same theme appears in Evgeny Zamyatin’s dystopian classic “We,” which was among Orwell’s most important influences.”

Meanwhile on a Wiki comments page–

“On the subject of whether or not George Orwell was gay; when he was Eric Blair he went along the path that most children at boarding school travel. Your hormones are on the move and you don’t at first know how to cope with them and so you get crushes on other pupils until you learn to understand yourself and your feelings better. Eric Blair was clearly no different to anyone else while he was at Eton. I have yet to unearth any clear evidence that he was gay, beyond him admitting to Cyril Connelly that he fancied a friend of his. It would not have been out of character if that is the road down which he chose to go because he went his own way from earliest childhood. However, if his inclination had been developing along those lines, I do not understand why he did not fall in love with his blond and charming friend Prosper Buddicom, his closest male friend during the school holidays from the age of eleven until he went to Burma at nineteen.”

That’s Eric on the left, Prosper on the right and Prosper’s sister in between.

Instead, from that early age he became completely attached to Prosper’s diminutive but highly intelligent sister Jacintha, for whom he later wrote the two poems ‘Our Minds are Married…’ and ‘The Pagan’. Jacintha and Eric were inseparable companions, two very young but brilliant minds growing and maturing together. It was a blow to Eric when he declared his feelings to Jacintha – and she gently rebuffed him, saying that she had no physical feelings for his person, but absolute unity with his mind. He went off to Burma and lost his virginity at the earliest opportunity to various small and delicate Burmese girls, whose bodies were very similar to Jacintha’s. Later in life, he may well have had partners from both sexes but I cannot so far find the evidence for this. Maybe someone else is better informed? Dione 12 September 2006″

Do I see any hands going up?

FOR ALL OF ORWELL’S unflinching encounters with casual brutality in the world at large, the diaries do illuminate one dark and private secret: the author’s own bigoted views of Jews. Orwell clearly maintained two sets of books, privately slagging Jews in his notebook while publicly condemning bigotry in his 1945 essay “Antisemitism in Britain,” in which he denounced anti-Semitism as “an irrational thing.” At one point in his travels around London during the Blitz, Orwell visited three subway stations that doubled as bomb shelters. There, he wrote, he found “a higher proportion of Jews than one would normally see in a crowd of this size. What is bad about Jews is that they are not only conspicuous, but go out of their way to make themselves so. A fearful Jewish woman, a regular comic-paper cartoon of a Jewess, fought her way off the train at Oxford Circus, landing blows on anyone who stood in her way.” Deeper in that entry, he wrote, “What I do feel is that any Jew, i.e. European Jews, would prefer Hitler’s kind of social system to ours, if it were not that he happens to persecute them.”

Really? Yes he really wrote that.

“In his hop-picking diary, he teed off on a “little Liverpool Jew of eighteen, a thorough guttersnipe.” Orwell doesn’t even dignify the Liverpudlian with a name, calling him “the Jew” throughout.

‘I do not know when I have seen anyone who disgusted me so much as this boy. He was as greedy as a pig about food, perpetually scrounging round dustbins, and he had a face that recalled some low-down carrion-eating beast. His manner of talking about women, and the expression on his face when he did so, were so loathsomely obscene as to make me feel almost sick. We could never persuade him to wash more of himself than his nose and a small circle around it, and he mentioned quite casually that he had several different kinds of louse on him.’

I don’t know what’s more remarkable here: Orwell’s self-confidence about his Jew-dar, his calculations of the proper percentage of Jews who should be escaping death by rushing to the stations, or his assessment of the filthy, greedy, pushy people he has identified as Jews.”

Six of one, half a dozen of the other.

“Orwell’s novels mention Jews, but don’t excoriate them. On the basis of his published record, does Orwell thereby qualify for the same indulgence that some awarded to H. L. Mencken because his anti-Semitic comments were largely confined to his unpublished works? Do we reach for the other rationales that have been floated in defense of unconfessed anti-Semites in the literary world: that his offenses were committed in a less enlightened time, that England wasn’t a very friendly place for Jews in the first place, that his phobia of Jews appears to have been fragmentary, etc.?”

Clearly he kept “two sets of books” for a reason. He was an anti-semite. But he knew full well that one couldn’t say such things “out loud” anymore, thanks to the man who he claimed the Jews secretly admired.

“In his introduction, Hitchens writes that he recoiled at the range of Orwell’s prejudice against Jews to be found in these diaries—but offers little in the way of judgment beyond his own visceral response as a reader.”

“One might have expected Hitchens—who has written eloquently on anti-Semitism and his own Jewish heritage—to address these issues in his introduction. All he allows is that Orwell expressed disgust and repulsion at all stupid and dirty people, directed his misanthropy and xenophobia at other groups, and that this was a “stage in Orwell’s own evolution” toward greater tolerance. (Davison takes a neutral, basically silent corner.) Hitchens mistakenly treats the issue as an embarrassing tic in a revered thinker and writer. That’s a shame: By issuing Orwell a get-out-of-jail-free card, he avoided deeper engagement with what it meant to be a public advocate of tolerance and a private bigot, a subject that was in his métier. The dateline on the Hitchens introduction is a little more than two months before his own premature death, so we can spot him a bundle of points. Still, by letting his hero off easy, Hitchens lets his readers down.”

You’ve heard of Internalized Homophobia haven’t you? Well there’s Internatized Anti-Semitism too. As for “letting his readers down,” this reader isn’t at all surprised by either Hitchens or Blair. Neither “matters” at all.