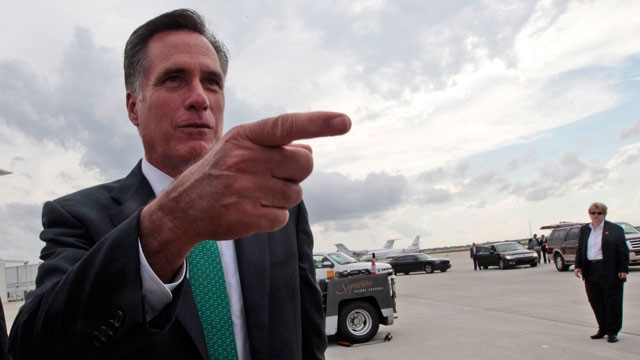 “Ten months ago this newspaper endorsed former Massachusetts Gov. Mitt Romney for the Republican nomination for president. An overarching consideration was which of the party’s candidates could we see occupying the White House, and there was no question that Romney was qualified for the job.”

“Now, in the closing days of the general election campaign, the question is which of the two contenders deserves to be the next president of the United States.

Both President Barack Obama and Governor Romney are superbly qualified. Both are graduates of the Harvard University Law School who have distinguished themselves in government, in public service and in private life. Both are devoted husbands and fathers American voters are deeply divided about this race. The Register’s editorial board, as it should, had a vigorous debate over this endorsement. Our discussion repeatedly circled back to the nation’s single most important challenge: pulling the economy out of the doldrums, getting more Americans back in the workforce in meaningful jobs with promising futures, and getting the federal government on a track to balance the budget in a bipartisan manner that the country demands.”

If the country demands it then why would it elect a Republican? The Repubican party is adamantly opposed to bipartisanship in any way shape or form.

“Which candidate could forge the compromises in Congress to achieve these goals? When the question is framed in those terms, Mitt Romney emerges the stronger candidate.”

“The former governor and business executive has a strong record of achievement in both the private and the public sectors. He was an accomplished governor in a liberal state. He founded and ran a successful business that turned around failing companies. He successfully managed the 2002 Winter Olympics in Salt Lake City.”

“Romney has made rebuilding the economy his No. 1 campaign priority — and rightly so The nation has struggled to recover from recession for the past 40 months. Still, the economy is growing at an unacceptably anemic rate of around 2 percent a year and could slip back into recession depending on what happens in the European Union and China.

The workforce is still 4.5 million jobs short of the nearly 9 million that were lost in the recession. Longer term, looming deficits driven by Social Security and Medicare pose the single greatest threats to the nation’s economic security.”

“The president’s best efforts to resuscitate the stumbling economy have fallen short. Nothing indicates it would change with a second term in the White House. The president’s prescription upon entering office was a dose of government stimulus, which was the right call because it put cash in the pockets of consumers, made investments in vital infrastructure and kept millions of teachers and police officers on the job.

That stimulus was necessary to bridge the nation from recession to recovery, but the time is past for more government stimulus.”

“Consumers must feel more confident about their own economic futures to begin spending on the products and services that power the economy. A renewed sense of confidence will spark renewed investment by American companies. Industry will return to full production and hiring will begin again.

That should come with Mitt Romney in the White House.”

Plus each and every one of you will get a pony!

“There is not a lot of difference between the two candidates’ short-term economic plans, as both are heavy on a promise of tax cuts for the middle class but short on details. Romney’s plan, however, goes beyond helping the middle class with tax breaks.”

“Throughout the campaign, he has expressed faith in the private sector to fuel a more robust economic recovery if it has more confidence that the federal government will not be an obstacle. Romney has a strategy for job growth through tax and regulatory relief for small businesses, encouraging all forms of domestic energy production, education that prepares graduates with job skills, expanding foreign trade and reducing the burden of federal deficits.

That formula, coupled with his business acumen, should unlock this nation’s economic potential. One of the biggest obstacles either candidate faces is partisan gridlock in Congress. It appears unlikely either party will have enough votes to have its own way without bringing over members from across the aisle.”

“Early in his administration, President Obama reached out to Republicans but was rebuffed.”

“Since then, he has abandoned the effort, and the partisan divide has hardened. That has hampered not only the economy, but the entire country. We remain a nation of red states and blue states.”

Because the Republicans want it that way.

“Romney succeeded as governor in Massachusetts where he faced Democratic majorities in the legislature. If elected, he would have an opportunity to renew the effort. He would begin with an advantage in the House, where a Republican majority is likely to remain after the election. The challenge will be in the Senate, where it takes a super-majority to pass anything of substance.

Romney could be assured that Democrats would work to defeat him as hard as Republicans worked against Obama is if he were to adopt the reactionary agenda of the most extreme elements of the Republican Party. Romney had to tack to the right during the primary season. Since then, he has recalibrated his campaign to focus on his concern for the middle class, and that is believable if the real Mitt Romney is the one on display as governor of Massachusetts who passed a health care reform plan that became the model for the one passed by Congress.”

Over the intense objections of the Repubican party.

“Romney should not squander an opportunity to build consensus in Washington by wasting time on issues that animate many in his party. We cannot rewind the clock on progress for minorities, women, gays and lesbians. We must make it easier for immigrants to come here to live and work legally and stop making criminals of those who are living here lawfully, paying taxes and raising families. The federal government must continue to insist on clean air and water and encourage clean and renewable energy.”

“Barack Obama rocketed to the presidency from relative obscurity with a theme of hope and change. A different reality has marked his presidency. His record on the economy the past four years does not suggest he would lead in the direction the nation must go in the next four years.”

“Voters should give Mitt Romney a chance to correct the nation’s fiscal course and to implode the partisan gridlock that has shackled Washington and the rest of America — with the understanding that he would face the same assessment in four years if he does not succeed.”

Sing us out, Andrew