According to a World’s Worst Newspaper op-ed by one Jon Meacham President Obama has a new “role model”:

“In this hour of reflexive partisan division, with Americans frustrated by Washington’s seeming inability to address significant fiscal questions, among other issues, an inevitable question arises: Can President Obama do anything to create enough good will to pass some lasting reforms?
Here is a modest proposal, one drawn from the presidency of another tall, cool, cerebral politician-writer: use the White House and the president’s personal company to attempt to weave attachments and increase a sense of common purpose in the capital. Dinners with the president — or breakfast or lunch or coffee or drinks or golf — won’t create a glorious bipartisan Valhalla, but history suggests that at least one of our greatest presidents mastered the means of entertaining to political effect.”

As if he hasn’t entertained before. Surely Mr. Meacham remembers the “Beer Summit”

You can tell from the look on his face just how pleased that police officer was to be there.

Maybe the President can invite Mittens and company over to chow down. 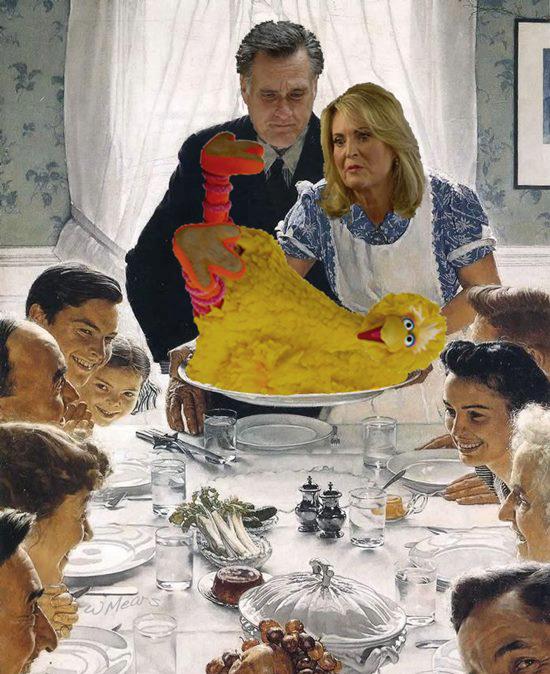 after all the Republicans sure don’t want ‘em anymore.

But back to Jefferson

“During both of his terms, on the eve of each Congressional session, President Thomas Jefferson warned friends that, in our vernacular, he was about to go offline. “As Congress will meet this day week, we begin now to be in the bustle of preparation,” he wrote a family member. “When that begins, between the occupations of business and of entertainment, I shall become an unpunctual correspondent.”

“Hours that Jefferson might have devoted to seeing friends in Washington or to writing letters were to be consumed instead by his pursuit of a fairly constant campaign of using his social hours — and particularly his dinner table — as a way of making the rougher edges of politics smooth. He believed that sociability was essential to republicanism. Men who liked and respected and enjoyed one another were more likely to cultivate the virtuous habits that would truly enable the nation’s citizens to engage in “the pursuit of happiness.” An affectionate man living in harmony with his neighbors was more likely to understand the mutual sacrifices of opinion necessary to a republic’s success.
In late 1801, Jefferson’s Washington routine had settled into what he called “a steady and uniform course.” He began the day working at his writing table, doing paperwork and receiving callers from early morning until midday; that gave him, he figured, “an interval of 4 hours for riding, dining and a little unbending.” At noon he tried to leave the President’s House for a ride or a walk before returning at about 4, when he became “engaged with company.” He entertained constantly, handsomely and with a purpose. Guests were entranced anew by his “easy, candid and gentle manners.”

Lower front and center (white t-shirt, arms crossed) is the Beyond Estimable Lucian K. Truscott IV whose efforts to put his family’s history in proper perspective puts him forever in our gratitude.

“Jefferson’s dinner campaigns were intensely practical. He believed in constant conversation between the president and lawmakers, for “if the members are to know nothing but what is important enough to be put in a public message,” Jefferson wrote, “it becomes a government of chance and not of design.” The Jefferson strategy largely worked. In the Jefferson years, from 1801 to 1809, Republicans were heard to acknowledge that “the President’s dinners had silenced them” at moments when they were inclined to vote against the administration.”

Do you have the recipes?

“Entertaining also softened his foes. The Federalist Senator William Plumer of New Hampshire had begun his Washington career with predictably harsh views of Jefferson. Early on, Plumer dismissed Jefferson as the leader of a “feeble, nerveless administration.” As the years passed, Plumer’s opinion of the president, formed at close quarters, evolved from hostility to respect: “The more critically and impartially I examine the character and conduct of Mr. Jefferson the more favorably I think of his integrity,” he wrote in 1806.”

And Republicans are sure to recognize President Obama’s integrity after a nice hot meal — right?

“Yet Jefferson could be ruthless about the use of his limited time in power. To create an ethos of supra-partisan civility would have required bringing politicians of opposing views together under his aegis. Jefferson had only four or eight years to impress himself on the country and was unwilling to waste any of those hours presiding over arguments, even polite ones, between differing factions at his table.
He chose, then, to use dinner at the President’s House to put himself and his own agenda at the center of things. He ended the more formal arrangements common to Presidents Washington and Adams, forbidding seating by precedence — he preferred “pell-mell,” or the more democratic practice of having guests sit where they chose. The gentle creation of disorder at dinner magnified his own strengths as a conversationalist.
Jefferson was under no utopian illusions about the efficacy of political entertaining. He knew that interests would always clash; as his presidential years went by, his goal was to ameliorate party differences, not eliminate them, since elimination was impossible. As he put it, though, “the ground of liberty is to be gained by inches.” So is the ground of governing, as we may hope the incumbent president realizes when his second term begins in earnest.”

After four years of having shit thrown in his face 24/7 President Obama is under no utopian illusions either.

“This is probably the most important election in the history of America. Indeed the very existence of the United States of America and what we stand for is at stake. Will we continue to be a country led “Of the people, by the people, for the people”? Or will we become a socialist welfare state, where the looters and moochers are entitled to strip the wealth from the producers. Every American who sees the truth needs to step up. There are too many in this country who are happy to trade their personal freedoms for a life free of personal responsibility. This is NOT what it means to be an American. Do not think we can stand by and things will work out. Our current president will destroy our republican democracy and replace it with a socialist one if re-elected. DO NOT GIVE HIM A SECOND TERM.”

As for dinner guests, I’d advise the President to skip the Pubblies and invite the 99% instead.