The son of the founder of The Hollywood Reporter has elected to confect an apology for the pubication’s complicity in what has come to be known as “The McCarthy Era” . . .sort of.

“We live in a country where the First Amendment guarantees Americans protection from discrimination for their religion or ideological beliefs. But the record reflects differently. With the landing at Plymouth Rock, the Pilgrims imported scapegoating from Great Britain in 1620, and during the centuries, it has been refined to an art form. Since that time, witch-hunting (even witch-burning) has become a major part of the American political lexicon. And while pyres and stakes have been traded for printing presses, the parallel between the eras is unsettling: The witch burnings at Salem in 1692 and the internment of Japanese Americans during World War II

share too many similarities. At its very core, scapegoating is the gasoline that fuels power, and every story of power cannot succeed without a good scapegoat. Billy Wilkerson’s story is no different.”

“From 1930 to 1962, Billy Wilkerson was the publisher of The Hollywood Reporter. He also was my father. Before establishing THR, he actively was involved in the film industry, mainly as a producer. In 1927, he had plans to build and own a film studio, but without the help of the studio titans, who owned everything related to film production at that time — from the talent to distribution to the theater chains — it would have been next to impossible for Wilkerson. For whatever reason, the movie brass refused him entry into their “club” and squashed his dream. So he found another one: exacting revenge.”

And how did he do this praytell?

“After World War II, the spread of communism began gobbling up Eastern Europe. This presented Wilkerson with a formidable opportunity. In his maniacal quest to annihilate the studio owners, he realized that the most effective retaliation was to destroy their talent. In the wake of this emerging hysteria surrounding communism, the easiest way to crush the studio owners was to simply call their actors, writers and directors communists. Unfortunately, they would become the collateral damage of history. Apart from being charged with contempt, for refusing to name names, none of these individuals committed any crimes. But Wilkerson’s 1946 anti-communist campaign, which began as a schoolyard spat with the movie brass, snowballed out of control. In 1950, what I call Hollywood’s Holocaust spread nationwide under Sen. Joseph McCarthy, R-Wis., and claimed the livelihoods of thousands of Americans. Calling someone a communist today is almost laughable. But in 1950, it was a professional death sentence. Instantaneously, people lost their jobs, and future employment was, in too many cases, denied.”

Here are two blacklist victims I happen to know personally in a picture THR has helpfully provided.

Norma Barzman (seated) was married to an actual former communist — her husband and screenwriting partner Ben. Ben’s credits include Joseph Losey’s Time Without Pity – the film that re-established the great director’s reputation after, rather than face HUAC, he “Got out of Dodge” and in Europe enjoyed the sort of career American directors only dream about.

Marsha wasn’t a party member at all. She was a liberal — the true, yet rarely acknowledged — target of the blacklist.

“The Blacklist silenced the careers of some of the studios’ greatest talent and ruined countless others merely standing on the sidelines.
“The real victims of the Blacklist,” mused film producer Howard Koch, “were those who had the wrong last names or went to communist meetings just to pick up girls.” The U.S. government, which had a great hand in this event, could have prevented it from mushrooming. It did nothing. And no one has ever apologized to the victims of this holocaust. So on the eve of this dark 65th anniversary, I feel an apology is necessary. It’s possible, had my father lived long enough, that he would have apologized for creating something that devastated so many careers. On behalf of my family, and particularly my late father, I wish to convey my sincerest apologies and deepest regrets to those who were victimized by this unfortunate incident.” 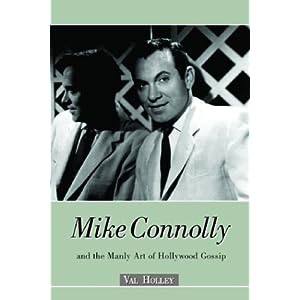 A closeted self-loathing gay man, Connolly instigated a virtual reign of terror through his column which ran from 1951 to 1966. So powerful was Connolly’s sway that Ezra Goodman in his great book

“One of the leading ‘male’ gossipiest in Hollywood was a source for Confidential – the magazine used an unpublished story about this olumnists amorous activities as a journalistic sword over his head.”

That was just the tip of the iceberg. For as Val Holley

shows in his great book MIke Connolly and The Manly Art of Hollywood Gossip the creep did a lot more. One of Holley’s most important revelations is the fact that Elia Kazan

had originally planned to speak only about himself to HUAC. Connolly made it clear to Kazan that unless he named names a little potboiler he was planning to make called On the Waterfront would never reach the screen.

Yes Gadge, you were a bum. And here to explain why — and a great deal more — is a far more honest Abe than the one Tony Kushner claims to comprehend.

As Wlliam Makepeace Thackeray would say “They are all equal now.”

Take it away Lenny