Fait Diver : Bless Me Father For I Have Tweaked

The odd thing is one doesn’t run across headlines like “Cross-dressing Meth Priest Liked Sex In Rectory” more often.

“The Catholic priest busted for allegedly dealing crystal meth was suspended after church officials discovered he was a cross-dresser who was having sex in the rectory at Bridgeport’s St. Augustine Cathedral.” 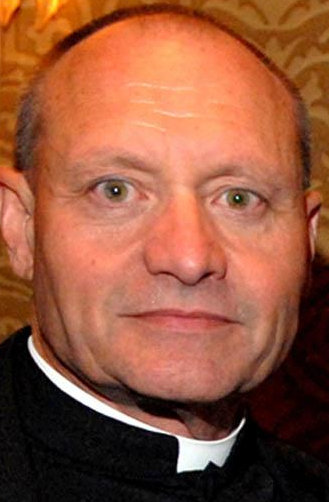 “Monsignor Kevin Wallin was relieved of his duties in May, but the Roman Catholic Diocese of Bridgeport had continued to pay him a stipend until his Jan. 3 arrest — a day he was planning to fly to London on vacation.”

“Now dubbed “Msgr. Meth” by some, Wallin seemed to live a life that easily could have been ripped from the script of “Breaking Bad,” the popular AMC series about a high school chemistry teacher turned crystal methamphetamine producer. At one point, Wallin was selling upwards of $9,000 of meth a week, according to his indictment.”

I’m sure he’s a lot nicer than Walter.

Then again, maybe not.

“In his post-priesthood, Wallin, 61, bought an adult specialty and video store in North Haven called Land of Oz that sells sex toys and X-rated DVDs. Investigators believe the shop helped him launder thousands of dollars in weekly profits.”

So was he James Franco?

“Wallin’s arrest sent shock waves through the Bridgeport and Danbury communities where he was known as a charismatic speaker who was involved in many charitable activities, and who enjoyed Broadway musicals and show tunes. He often attended musicals with his mentor, former N.Y. Cardinal Edward Egan and parishioners.”

“There is an evil invading our world and it has come to our church,” said Maria Spencer-Fonseca, a long-time parishioner at St. Augustine as she stood outside the cathedral Thursday. “This was a work of evil — and I am praying for the monsignor.”
“I can’t fathom it,” said 77-year-old Therese Ruppert, a parishioner at the Church of St. Peter in Danbury, where Wallin was pastor from 1996 to 2002. “He was so spiritual. His sermons were wonderful. He had such knowledge of theology.”
Wallin, who is represented by a federal public defender, is charged with possession with intent to distribute and distribution of methamphetamine. He has been detained without bond pending an arraignment next week.
Diocese officials stressed that they had no information that Wallin was selling drugs when he was pastor of St. Augustine’s Cathedral or when he previously served as pastor of St. Peter Parish.
Ordained in 1984, he served in Bridgeport from that year until 1996, when he went to Danbury. He returned to Bridgeport in 2002 and remained until his resignation in 2011.
“We had no indication he had a drug problem and never had complaints regarding him and drugs,” said Diocese Spokesman Brian Wallace.

Instead, Wallace said they became concerned in the spring of 2011 when they began receiving complaints from parishioners regarding Wallin’s appearance and erratic behavior.
“We approached him and he admitted he was struggling a bit and shortly after that he resigned (July 2011) and the bishop granted him a sabbatical,” Wallace said.
Wallin did go for a health assessment but then didn’t go for follow-up examinations and subsequently dropped out of sight. As a result, Wallace said Wallin was suspended.
But sources knowledgeable with the case said the situation went deeper than diocese officials will publicly admit.
While pastor of St. Augustine’s, sources said he often disappeared for days at a time; and rectory personnel became concerned and notified diocese officials when Wallin, sometimes dressed as a woman, would entertain odd-looking men, some who were also dressed in women’s clothing and engaging in sex acts.”

“In addition, diocese officials found bizarre sex toys in Wallin’s residence, the sources said.
Diocese officials consulted lawyers about the situation and were assured none of Wallin’s behavior appeared illegal.
After he left the church, federal authorities say, Wallin rented two apartments on Golden Hill Street in Waterbury, one for himself and the other for his alleged partner in the drug business, Kenneth “Lyme” Devries, who was also arrested in the case along with Chad McCluskey and his girlfriend, Kristen Laschober, both of California.
Federal authorities said in July 2012 they received information from an informant that Wallin was selling methamphetamine in the Waterbury area.
They said the informant had met Wallin at a party in early 2012 and struck up an agreement for Wallin to sell the informant six ounces of the drug a week for a total of $9,000.
The arrangement last about six weeks, delayed only when Wallin had to go into rehabilitation for his own addiction to meth. During that time Wallin gave the informant the number of his California source so that the informant would still get the drug, the indictment affidavit states.
Beginning in late September 2012, an undercover officer with the Statewide Narcotics Task Force began buying meth from Wallin. During one of their meetings in Wallin’s Waterbury apartment — where he was later arrested — the affidavit states the undercover officer saw a gallon-size plastic bag filled with crystal meth.”

“The telephone transactions between Wallin and the officer were recorded.
Despite the huge amounts of cash rolling in, Wallin would often get into disputes about money and disagreements with his partners over the weight of the drugs.
Wallin also kept three cell phones, rented two Waterbury apartments and delivered meth in magazines, the affidavit shows. The crystal meth came in shipments from McCluskey and his girlfriend, Laschober, who live in California. Both also have been indicted.
Wallin also was fluent in drug lingo, and in text messages he would often use street phrases such as “5 Grover Clevelands,” for $500 worth of meth or “eight balls,” for an eighth of an ounce, the indictment states.”

Father Lou will sing us out