“CHARLOTTE, N.C.—It was a rematch years in the making, but Louisiana Republican Gov. Bobby Jindal finally got another shot on Thursday to deliver a formal response to President Barack Obama’s vision for the country. In 2009, Jindal was nearly laughed off the national stage when he delivered the official Republican response to Obama’s first address to a joint session of Congress. Jindal’s “response,” consisting of restrained rhetoric spoken awkwardly into a single camera, was universally panned as a dud. Some even called it a career killer.”

But as we all know Republicans are The Walking Dead

“Flash forward to 2013: Obama has been re-elected to his second term as president. At his inauguration ceremony, he delivers one of the most ambitious defenses of liberalism from an American president in modern history. With Mitt Romney out of the picture and the Republican Party in temporary post-election disarray, Jindal sees an opportunity for redemption and to position himself as the alpha in the party” 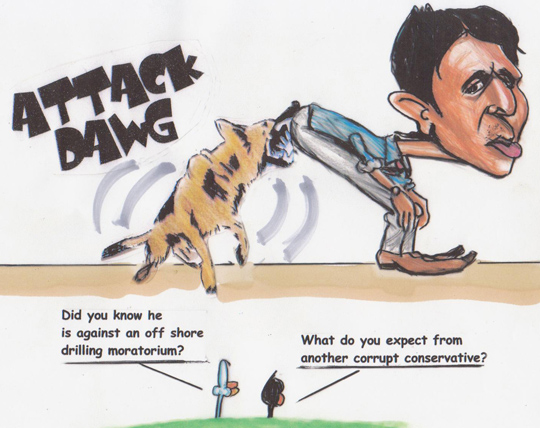 “The circumstances seem perfect for a politician who harbors national ambitions. His venue is the winter meeting of the Republican National Committee, where the top party activists from every American state and territory have gathered to chart the GOP’s next move. They’re nervous about the party’s future and worried about their ability to bring minorities into the fold. They’re looking for a leader. Jindal, the son of Indian immigrants, sees a chance to make an early impression on the party faithful, and boldly calls for change.
“We’ve got to stop being the stupid party. It’s time for a new Republican Party that talks like adults,” he said. “We had a number of Republicans damage the brand this year with offensive and bizarre comments. I’m here to say we’ve had enough of that.”

You mean we’ve had enough of THIS?

“Throughout his 25-minute speech, Jindal rebutted Obama’s defense earlier this week for a robust and active federal government and offered a counter-philosophy focused on growing private businesses beyond Washington without relying on the engine of the federal government.”

“We must lay out the contrast between liberalism’s top-down government solutions and our bottom-up real world philosophy. We believe in creating abundance, not redistributing scarcity,” he said. “We should let the other side try to sell Washington’s ability to help the economy, while we promote the entrepreneur, the risk-taker, the self-employed woman who is one sale away from hiring her first employee. Let the Democrats sell the stale power of more federal programs, while we promote the rejuvenating power of new businesses.”

Translation: “We’ll do exactly what the coporations tell us to.”

“Jindal took on Obama’s call for higher taxes on the wealthy, which the president has argued helps supply money for needed for federal programs that aid the poor and middle class. He slammed Obama’s foreign policy agenda and the recent effort to reform federal laws restricting purchases of certain guns and high-caliber magazines that were used in deadly mass shootings during Obama’s first term.”

Because the new, improved “non-stupid” GOP can never have enough guns.

“Higher taxes still do not create prosperity for all. And more government still does not grow jobs,” Jindal said. “If you believe in higher taxes, more debt, more government spending, weakness abroad, and taking guns from law-abiding citizens—you already have a party that is well represented in Washington. No, the Republican Party does not need to change our principles, but we might need to change just about everything else we do.”

IOW, “Take down those drapes or it’s curtains for all of us!”

“Instead of worrying about managing government, it’s time for us to address how we can lead America to a place where she can once again become the land of opportunity, where she can once again become a place of growth and opportunity,” he said. “We should put all of our eggs in that basket as conservatives and Republicans.”
The speech, delivered during a dinner amid the clanking of silverware and dishes, was interrupted only a few times by polite applause. While the words Jindal spoke appeared powerful on paper, he rushed through his remarks without a steady cadence. (It didn’t help that near the end of his speech, a jazz band began to loudly warm up their instruments. Jindal ignored it.) Some of the words seemed mumbled.”

Well Bobby may sound mumbed but his party sure doesn’t

“Republicans have a new strategy for 2016: Change the rules of presidential elections in order to swing the electoral college in the GOP’s favor.
On Wednesday, Virginia’s Republican-controlled legislature became one of the first to advance a bill that would allocate electoral votes by congressional district. Last week, Republican National Committee Chairman Reince Priebus endorsed pushing through similar proposals in other states with Republican legislative majorities.
The strategy would have states alter the way they translate individual votes into electors — thereby giving Republican candidates an advantage. Had the 2012 election been apportioned in every state according to these new Republicans plans, Romney would have led Obama by at least 11 electoral votes. Here’s how:
In the 2012 election, President Barack Obama defeated Mitt Romney by 126 electoral votes.”

Ms. Maddow Explains It All For You

“Old School” Republicans Frank and Nancy will sing us out