Well there you have it. Apparently all pre-Jesus marriages are invalid.

And as the Shangri-Las say “He’s good/bad but he’s not evil.”

But what’s the story with THIS Queen?

Christopher West (born 1969)[ is a Catholic author and speaker, best known for his work on Pope John Paul II’s series of audience addresses entitled the Theology of the Body. 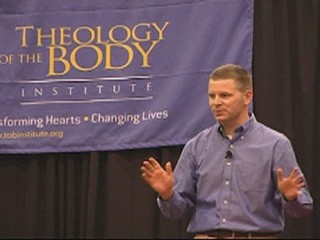 West has been delivering lectures since 1997, mostly on topics such as Christian anthropology, the Creed, morality, sacraments, marriage, sexuality, and family life. He has also spoken on national radio and on television. He is one of the main educators in the Theology of the Body Institute, which offers graduate level courses and other training programs on the Theology of the Body.

He and his wife Wendy reside in Lancaster County, Pennsylvania (USA) and have five children.

Cecilia LeChevallier, Coordinator, Marriage Preparation and Natural Family Planning, Diocese of Camden, NJ commented that “Christopher West is able to synthesize the Theology of the Body in an understandable and exciting way that gets people excited about it and excited about living it.”

Charles J. Chaput, O.F.M. Cap. Archbishop of Denver says that “Christopher West’s keen grasp of John Paul II’s Theology of the Body and his ability to make it accessible to others is changing lives, strengthening marriages, and renewing people’s faith in the Church across the country and internationally.”
Theologian David L. Schindler charged that West promotes a “pansexualist tendency” that ties all important human and supernatural activity back to sex without making necessary distinctions.
Moral theologian Dr. Janet Smith defended West, saying his work is “completely sound” and that she found Schindler’s response “puzzling.” Smith, in her response to Schindler’s critique, says that Schindler “provides a list of his objections to West’s theology without citing one text to substantiate his charges…As it stands, I do not find that his concerns correspond with what I have read in West’s work or heard in his lectures.”

It sure doesn’t. He’s a homophobe.

Dr. Alice von Hildebrand, widow of Catholic theologian Dietrich von Hildebrand, has said West’s approach has become too self-assured. She criticized his presentations as irreverent and insensitive to the “tremendous dangers” of concupiscence.

“Concupiscence (from the Latin: con-, with + cupi, cupid – desire + -escere – suffix denoting beginning of a process or state) is often defined as an ardent, usually sensual, longing. The concept is most commonly encountered in Christian theology, where it also receives the name “Fomes peccati”, as the selfish human desire for an object, person, or experience.[2] For Christians, concupiscence refers to what they understand as the orientation, inclination or innate tendency of human beings to long for fleshly appetites, often associated with a desire to do things which are proscribed.”

Theologian Michael Waldstein, who wrote the definitive translation of The Theology of the Body, addressed Schindler’s remarks in an essay published on InsideCatholic.com. Waldstein said that Schindler’s essay was a “blanket negative statement” that made “sweeping accusations” against a position he did not recognize as West’s.
Dawn Eden, author of the book The Thrill of the Chaste, published her examination of West’s presentation of John Paul II’s teachings in her master’s thesis. Eden commends West’s speaking and writing skills, but takes issue with some points of theology that West uses in his ministry.
Justin Cardinal Rigali, Archbishop of Philadelphia, and Kevin Rhoades, Bishop of Harrisburg, issued a joint statement in support of West’s work.
They said,
“We are convinced that John Paul II’s Theology of the Body is a treasure for the Church, indeed a gift of the Holy Spirit for our time. Yet, its scholarly language needs to be ‘translated’ into more accessible categories if the average person is to benefit from it. To do this is the specific mission of the Theology of the Body Institute, and we believe that Christopher West, the Institute’s popular lecturer and spokesman, has been given a particular charism to carry out this mission. With great skill as a presenter, with keen insight as a thinker, and with profound reverence for the mystery of human sexuality, he has been able to reach thousands in our sexually wounded culture with the Gospel of salvation in Christ.”

West also responded to many of the critiques, acknowledging that “so long as we are on earth, we will always have to battle with concupiscence” and conceding “In some of my earliest lectures and tapes, I confess that I did not emphasize this important point clearly enough.”

On January 31, 2012, West released a book entitled At the Heart of the Gospel: Reclaiming the Body for the New Evangelization. Christoph Cardinal Schönborn, Cardinal Archbishop Of Vienna; General Editor, Catechism of the Catholic Church and Grand Chancellor, International Theological Institute for Studies on Marriage and the Family, gave the following endorsement for the book,

“The light of the Gospel, which is a clear but at times painful light, can illumine human sexuality to its very depth in order to transform it and bring it to its full beauty. Here lies the great strength of Blessed John Paul II’s Theology of the Body. In this peaceful and positive response to critics, Christopher West proves once again that he is a faithful and inspiring interpreter and communicator of this great pope’s teaching, a teaching so urgently needed for an effective proclamation of the Gospel.”

Take it away Harriet!